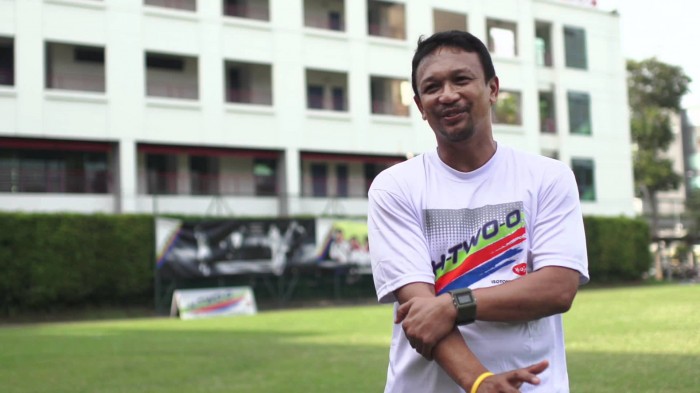 In the summer of 1983, a wild-haired, dark-skinned 21-year-old Singaporean landed on the shores of the Netherlands – a long, long way from his motherland, his eyes shining bright with hope and excitement

Fandi Ahmad was a ‘kampong boy’ (village boy) who, despite his youth, had acquired a cult status in Singapore; with people everywhere speaking in awe of his effulgent talent as early as when he was around 18 or 19. Clubs such as Boca Juniors and Ajax were after him, even when he was playing for the Singapore FA as a teenager.

It was Ajax he eventually chose, but after a three-week trial, Fandi rejected Ajax’s three-year deal and with it, the opportunity to work with and be honed by the legendary Johan Cruyff and play up front with the likes of a young Marco van Basten and Jan Molby, whom he had been scouted along with. He ended up choosing the Indonesian side Niac Mitra instead, choosing to ply his trade nearer to home, at least for the time being.

His abilities were further showcased in the Galatama League, where he helped Niac defend the league crown and his fame spread further, having scored 13 goals from a slightly deeper, second-striker-like position. The Netherlands would come knocking at his door again, and he decided to give it a go this time, thinking it better to believe in true love and fall flat on his face rather than to sit in a rocking chair one day, thinking about the what ifs and if onlys.  Fandi signed for FC Groningen on a two-year contract, becoming the first – and so far, only – Singaporean to play for a European club professionally.

Even though injuries marred his first few weeks at the club, Fandi did not need a cue to start doing what he does best and right from the word go, the striker seemed a livewire in the Groningen side, providing indefatigable energy and never-ending enthusiasm to the attack.

“It is difficult to know at what moment love begins. It is less difficult to know it has begun.”, were the wise words of H. W. Longfellow and I suppose the same could apply for Fandi and the Groningen fans. The wild-haired, dark-skinned striker would score twice on his Groningen debut and the fans needed no cue to start loving this young boy who had so much flair and creativity about him. The writing was already on the wall with respect to the mutual love and affection between both parties.

19th October 1983 would bring the day that Fandi would be remembered most dearly for. Groningen had qualified for the UEFA Cup for the first time in their history as a football club and in the second round, were up against the mighty and fabled Inter Milan of Italy – a team that boasted legendary names in Giuseppe Baresi, Bergomi, Altobelli and the young Uomo Ragno – goalkeeper Walter Zenga.

It was a cold evening in Groningen and Fandi, for whom the normal temperate climate was already needed much getting used to, had to strap on two pairs of gloves but he was ready to go alright. The Dutch side started brightly and after 16 minutes, broke down the Italian defence, Erwin Koeman finishing off an attack started by Jan van Dijk on the right flank.

Groningen kept progressing from there, initiating quick attacks, with Fandi being the focal point of most of the attacks. The striker from Singapore was having a field day against an Italian defence and the fairy tale would continue.

In the dying minutes of the match, an overhead pass from van Tiggelen was headed down by McDonald and fell to the striker who would strike it with his weaker foot past Zenga. As the ball nestled in the back of the net, the Groningen no 7 would wheel off in celebration as the likes of Bergomi and Zenga could only watch on in despair.

The Groningen faithful would erupt and the whole stadium would be on its feet, in appreciation and awe for this talented and loveable youngster from a few thousand miles away who would help them complete one of the most famous victories in the club’s history.

Fandi would complete the season with 10 goals for Groningen and unanimously voted the club’s most popular player, which was no surprise. The ‘Pearl from the Orient’ had given the club a breath of fresh air, garnished with Asian flamboyance and passion and later, rightfully earned himself a place in the club’s Hall of Fame.

He would only stay in Groningen for less than two years in total, choosing to return to Southeast Asia with Kuala Lumpur FA, not before another fruitless pursuit by Ajax for the striker. His may have been a short sojourn in Groningen, but it was more than enough to endear him to the fans, whose memories of him at the club are nothing short of delightful.

Fandi returned to the club after 23 long years in 2006, when the Groningen’s new stadium was unveiled and got a rapturous applause on his appearance. Arriving with his eldest two sons, there were many a warm embrace and words of reminiscence going around. The stadium at which he scored that goal versus Inter Milan has since been demolished, with nothing but a patch of grass dotted with buildings around it left.

When asked if they would like to play for Groningen in the future, the two Fandi Jrs in presence, nodded enthusiastically, wanting to emulate their father and his feats in the Netherlands. Fandi wore their colours once more, playing in a veteran’s match and causing the opposition defence all types of problems, even at age 34, with the same agility and momentum that had made him such a success the first time round. Off the field, still the same good-natured, affable man, there was no ex-teammate of Fandi’s or anyone at all associated with Groningen who was not elated to see the skilful Singaporean again.

Fandi Ahmad is with no doubt, the greatest footballer that the ‘tiny red dot’ in Southeast Asia has produced and remains a local cult hero, held in legendary regard by fans all over the region. The striker may be a son of Singapore, but his astonishing abilities on pitch coupled with his zeal for the game and his very much likeable demeanour on and off the pitch means that for years to come, the legend of Fandi Ahmad will be remembered and revered as one of Groningen’s Golden Boys.

4 thoughts on “The Singaporean who set Groningen on fire”