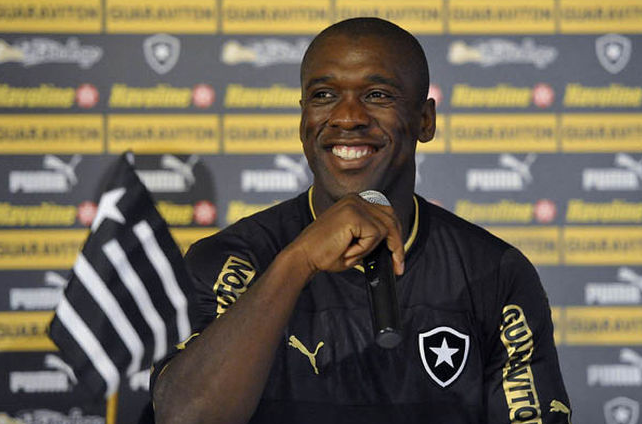 “Botafogo fans can celebrate, Seedorf is ours!” – The proclamation from Mauricio Assumpҫão, Botafogo club president, as he announced to the media a signing of gargantuan proportions. After months of speculation, the football icon, Dutch maestro Clarence Seedorf’s transfer to the Rio club was complete, and no one could quite believe it.

Quickly billed as the biggest foreign signing ever in the history of Brazilian football, the man who originally learned Portuguese from former team mate Roberto Carlos was officially on his way to the club often associated with an underwhelming history, bar club legends and football greats Nilton Santos and Garrincha, Botafogo had never really graduated to becoming a worldwide symbol of Brazilian football. That was until this July however, in the eyes of those high up in its own inner workings.

The ecstasy of fans of O Glorioso, the media hype of the country’s largest papers and the quotes coming out of the club itself were then amplified even more when the 36-year old finally stepped foot off of the plane, to meet the media storm he had created. Glorious scenes followed as the club held fan receptions for the man who had also instantly been handed the previously occupied number ten shirt, as banners, flags and facemasks came together to celebrate a remarkable moment not just for a club, but for an entire nation’s footballing history.

“When I was ten years old, I cried when Brazil went out of the World Cup [1986]. In Suriname, people cheer for two teams – Holland and Brazil.

“Botafogo, Flamengo, Fluminense… My father had photos of the teams in my room. I always knew the name Botafogo and now I have the pleasure of playing for this team.”

And as quotes like these flooded the papers and websites, behind the man hailed as an achievement for Botafogo, there was actually a fully formed team awaiting his arrival.

Oswaldo de Oliveira has always carried the stereotypical characteristics necessary for one to consider himself a proper Brazilian manager i.e. having a lifetime pass to the managerial roundabout. With a CV showing he has managed all 4 of Rio’s big clubs and 3 of São Paulo’s 4, Oswaldo accepted an offer from Botafogo just 6 months ago at this point after a stint in Japan with the stabilization of the team becoming his first objective. With the Rio state championship filling the first few months of management at the Engenhão, Oswaldo had time to experiment with combinations and formations against lower league opposition in preparation for May’s start to 2012’s Campeonato Brasileiro Serie A.

And, in the simplest of terms, it went extraordinarily well. After consistently exciting performances and a large unbeaten run,  Botafogo exited this year’s Rio championship not just as runners up, but also as a side who had become one of the most watchable in Brazil, employing a fluid, possession based 4-2-3-1 system. Perhaps being the most remarkable result of Oswaldo’s instant success may have been the transformation of previously deemed eternally inconsistent playmaker Andrezinho into a focal point of his side, enjoying his football for the first time in years as Oswaldo trustingly employing his new number 10 in a starting role week after the week, and in return getting the greatest form of Andrezinho’s frustrating career.

Amidst murmurings that the club were investing some interest in a certain Suriname-born Dutch legend, Botafogo continued their positive form and on-field affinity to the national championship, a title that has eluded them since 1995. Even last year they remained in contention going into the last few weeks, which was proceeded by a cataclysmic collapse resulting in a 9th place finish.

By eight weeks into the season, those who had ignored any threat posed by Botafogo’s strong squad could not stay in cosy ignorance any longer, after Fogão racked up 5 wins in eight rounds, with impressive victories over São Paulo, Internacional and a full strength Corinthians fresh after their continental conquest in the Copa Libertadores. Botafogo’s front four were simply electric, with Andrezinho expertly pulling the strings behind classy Argentine striker German Herrera, with pacey, skilful wingers Maicosuel and Vitor Junior amplifying the concern placed on opposing defences.

Fast forward to this date and, well, Botafogo find themselves in a perplexing situation. With one win in the last 4 games, Oswaldo’s side have slipped out of form and out of the league’s desirable positions. A few weeks ago, a home game against a relatively well performing Grêmio meant the welcome of their new icon and the end of cameramen’s new practice of shooting to Clarence Seedorf in the crowd every time Botafogo did anything on the field of play. It was soon apparent however, that this welcome was not one Seedorf would have hoped for.

You see, while the world’s attention switched to Botafogo’s new number 10 (yes, Andrezinho was forced to give it up), there was a lot more going on behind the hype the club was delivering. In fact, the club had simultaneously been even more busy in the out goings of players, with top scorer German Herrera off to the UAE, winger Maicosuel being sold for a large profit to Udinese and the man formerly worshipped by the Botafogo crowds, Sebastian ‘Loco’ Abreu, found himself without any time on the field and therefore left for smaller club Figueirense.

Unfortunately, it very much seemed the Seedorf experiment resulted with Botafogo emerging as a weaker side, albeit one with more publicity. And on the field against Grêmio that night, we saw it in action. Arguably the best player of the Brasileiro to that point, Andrezinho was exiled to the bench in a move Oswaldo had no choice against as Seedorf began life as Botafogo’s new icon. Full time and the Porto Alegre side had stolen an away win after Botafogo had failed to create anything significant in the 70 minutes or so Clarence Seedorf was on the pitch.

After another couple of games have past, it is actually fair to say Seedorf has grown into this side, becoming more used to the pace of the game and actually playing a role in some dangerous play in Botafogo’s attack but once more, they still haven’t been able to find the joyous affinity they had entering this escapade. Andrezinho has been forced into a makeshift winger, new striker Rafael Marques has been nothing short of awful and goals have eluded them on too many occasions.

A moment which should have signalled one of the most important periods of Botafogo’s history did not go to plan on the field and it also has not gone to plan for the club itself. The inevitable crowds were in fact present a few weeks back against Gremio, with well over 30,000 reportedly attending, which is huge compared to the rest of the Brasileiro but looking back at the weekend just past and it’s only fair to say, the Seedorf effect may have worn off. Botafogo once again drew under 5,000 people to their victory, the first of Seedorf’s spell, over Figueirense. With what now have to be considered positive signs on field being matched by very bad ones regarding crowd sizes, Oswaldo has now got to repeat the task I spoke about at the start of his management all that time ago and has to stabilize a team desperately trying to recreate its previous accomplishments.

Botafogo now also have the arrival of Uruguayan international Nicolas Lodeiro, a vastly talented injury ridden playmaker hoping to get his career back on track after a failed spell with Ajax. But even with another man to add to his already overly populated list of attacking midfielders, Oswaldo has a perplexing situation to deal with.

My fear is, of course, if he cannot reach an immediate solution, he will most likely require his pass to the managerial roundabout once more, possibly venturing abroad to Japan once more. As is so often the case in Brazil, boards can have such little patience for managers and although Botafogo have been a shining light in this respect with only 3 managers in the last few years, Oswaldo is under much more pressure than any of his predecessors.

Let’s face it; if the Seedorf experiment is a success, and Oswaldo implements a working system to restore the glorious football that got him a lot of plaudits a few months ago, it would be one of football’s best stories this year. The romantic football purists in us all can only dream of the 4-time Champions League adding another trophy to his collection as he hits the twilight of his legendary career, but I say, let’s keep dreaming. If we don’t, well, what’s the point?