West Brom currently hold 8th place in the Premier League table and whilst that might not be setting the world alight, they wouldn’t trade places with any number of clubs that are currently embroiled in a dogged, scrappy and ugly relegation battle. West Brom must be placed in context.

The club is all too familiar with the damaging effects of relegation as a side that was infamous with yo-yoing between the first and second tier of the English league pyramid. However since Roberto Di Matteo achieved promotion in his first season back in 2009/2010 the club has moved on from strength to strength despite obvious financial constraints. 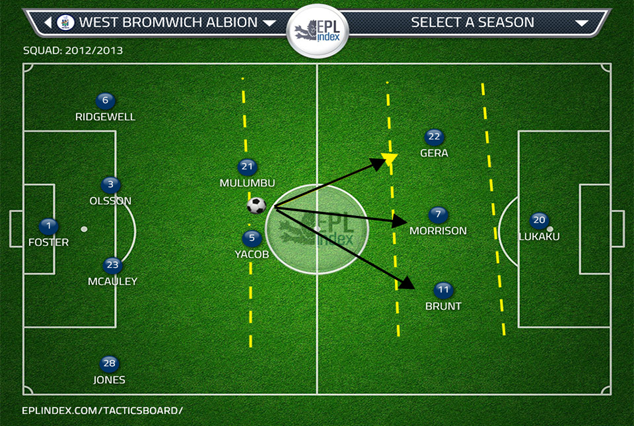 So following a very solid 10th place finish by departing manager Roy Hodgson the pressure was on Steve Clarke to prove he wasn’t just a no.2 when it came to his managerial abilities. So far the club have overshadowed last season’s success despite a third manager in as many seasons.

The reason? Steve Clarke has already left his stamp on a side that call a top half finish a success. Key to this success has been the fluidity of Clarke’s tactics in an era where many managers remain static with their formations and player positioning and tediously predictable with the set-up of their teams. This could certainly be traced down to the influence of a certain Jose Mourinho who Clarke no doubt had plenty of time as a member of Chelsea’s coaching staff to observe and learn from.

Bringing in Claudio Yacob on a free has proven to be a master-stroke. The Argentine has enjoyed a very impressive 88.5% passing accuracy rate in his central midfield role. This has allowed the defence the luxury so many teams lack of always having an outlay rather than just clearing their lines and having to instantly re-organize for a succession of opposition attacks. Yacob performs a very similar role to the ever – impressive Michael Carrick who, like him or hate him, has been the influential heartbeat of Manchester United’s title charge this season.

Youssouf Mulumbu has the required drive, speed, strength and ability to help Yacob command the midfield and helps break up opposition attacks ready to immediately release the ball to one of five attacking options. It could easy to see Mulumbu in an Arsenal or Manchester United shirt who are both perhaps lacking in the midfield area, and the cash raised could certainly help the overall quality of the squad.

It is no coincidence that in recent weeks West Brom have defeated the likes of Liverpool and Swansea who, obviously, like to play the ball short and on the ground. This allows the likes of Mulumbu and Yacob the chance to press close to the opposition and showcase their talent of recycling possession.

The loan signing of Romelu Lukuaku has also proven to be a master-stroke and while they may not be able to secure the Belgian for next season he has certainly helped Steve Clarke assert his authority on the team through positive results. Initially used as an impact player he has grown more and more into the team and has enjoyed a very healthy 13 league goals that is worthy of the £17M or so Chelsea forked out on the striker with a world-class potential.

To balance this only seven teams have bettered West Brom’s record of 40 league goals conceded this season. A fine balance has been struck between defence and attack and as the above graphic demonstrates West Brom have almost developed an American – football style squad with two separate units of attack and defence. Crucially, this remains completely flexible as the attacking trio can track back to make a five man midfield or in contrast a four man attacking line when needs be.

As with any team improvements must be made. Aside from Romelu Lukaku, the baggies’ top scorer is Shane Long on a lowly six goals and the 40 goals scored in 30 league games this season must be a source of great concern. The loss of Lukaku in the summer will prove to be a huge test of Steve Clarke’s abilities to wheel – and – deal (sorry Harry) his way through a transfer market where many teams (Arsenal, Tottenham, Manchester City, Borussia Dortmund, Barcelona) could all be looking for further striking options and Swansea’s miracle signing of Michu last season will mean clubs will be taking more notice of the smaller clubs singling out strikers.

A top class attacking midfield player who could chip in with goals would also be a saving grace however they are few and far between and again would have to be secured under the radar. West Brom could genuinely be contenders for a European spot next season in the same vein as Newcastle last season however the warning signals are there for Steve Clarke that next season could be much more difficult.

How will West Brom recover without Lukaku and who should they sign to replace him? Has West Brom’s successful loanee this season hindered their long term progress looking into next season? Get in touch!