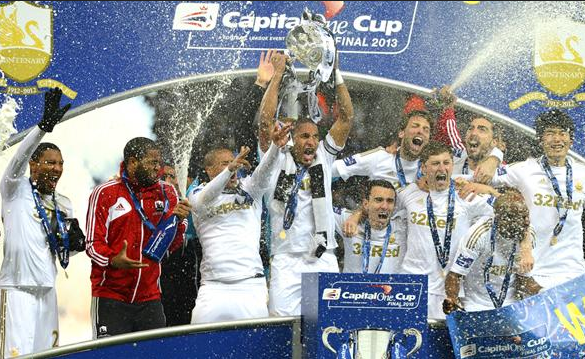 For football fans it has been less than a fortnight since the EPL season kicked off in vibrant and ferocious style. The season’s first domestic cup competition is shaping up to double the helping of frenzied football excitement.

The League Cup is a knockout single elimination competition open to all 92 clubs from the four English League competitions. (EPL, The Championship, League 1 and League 2). The Cup has lost plenty of its luster as clubs shift their emphasis on league promotion or a coveted place in the playoffs. EPL clubs tend to field below par squads instead focusing on high profile competitions like the Champions or Europa League. Teams earning qualification in Europe, FA Cup and League Cup titleholders receive a reprieve for the first two rounds and join the action in round three commencing on 23 September.

Last season Premier League surprise packets Swansea City progressed all the way to the final to run out eventual winners against League 2 side Bradford City in a record final margin of 5-0. This season the road to their title defense could be a rockier and uncertain given their slow start to the League season and juggling Europa League aspirations. They certainly boast the firepower needed upfront with the likes of Michu and recent signing Wilfried Bony.

The League Cup always delivers on the potential for the colloquially phrased “banana skin” games. These are games where teams expecting to progress often don’t and slip up along the way much to the pleasure of opposing fans. This is the romance of the League Cup and ensures that even minnow clubs with grossly inferior wages and stars starved team sheets can surprise to walk out in front of a capacity crowd at one of the most sacred of football amphitheaters, Wembley Stadium.

The Cup has suffered a popularity decline in recent years but given some of the lifeless draws over the weekend in the EPL, the drama and the promise of a big upset can spark renewed interest. Many top-flight managers wax lyrical at insignificance of such a competition, usually at post match interviews giving reasons for their hasty elimination. The value of silver always remains high in the footballing stock market and can never be short sold in a club aiming to climb ladder both on and off the pitch.

Most results go the way of the stronger sides but a handful of second and third round games can change the course of a club’s fortunes or ring alarm bells for some of the football management elite in the days following.

Liverpool has the finest record of any club in League Cup, lifting the trophy on eight occasions and deserve early consideration. As a general rule when each round ends the disappointment for some is matched by the massive influx of passionate lower league fans clambering onto the bandwagon of trophy glory.