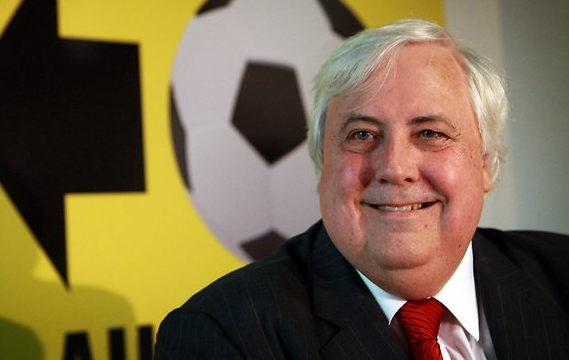 Clive Palmer has been booted out of the A-League, and that suits him just fine. What started as a dream to bring Asian Champions League football to the Gold Coast with the finest team in the country turned into a daily circus with a team of kids languishing at the bottom of the table.

Where did it all go wrong for Clive?  What role did the Football Federation of Australia (FFA)  play in bringing about this situation?  What brought on the surreal events of recent weeks and where do we go from here?  Reading between the lines of the events of the past three years, BackPageFootball has a theory of how events unfolded.

Clive Palmer is Queensland’s richest person. He dropped out of a law degree in the mid 1980’s to become a successful property developer on the Gold Coast. A few developments later he bought some mining interests at the bottom of the cycle and rode the resources boom to a believed $3-6 billion fortune. Clive is a self-made man with both a private side and a massive ego. The interest in football came when dealing with clients met through his mining interests. He encountered parties that owned football teams. When the A-League announced expansion plans to raise the number of teams from eight to ten, Palmer saw an opportunity to tap into the Asian market on a social level and create opportunities through football. Within three months Gold Coast United was born.

Gold Coast United hit the sporting cosmos with an almighty bang. A brash team with some big name signings, an outspoken manager and a new stadium to play in.  Clive announced that the team would win every game. Already Palmer showed signs of playing to the media and making statements that would guarantee headlines. In that season the team played some fantastic football and got off to an encouraging start. They didn’t win every game but faded late in the season and finished a creditable third – just failing to qualify for the Asian Champions League. In the second season the team finished fourth and narrowly missed playing in the Grand Final. Of course this season the Gold Coast is a distant last. No success, no Champions League, no opportunities to rub shoulders with his mates.

Something went wrong to curb Clive’s enthusiasm. In granting the license to the Gold Coast you can imagine that the FFA would have made certain promises and commitments to Palmer. The AFL (Australian Rules) had plans to create a team on the Gold Coast so the FFA was very keen to steal a march on the market by establishing a team first. The AFL focussed on a slow build, establishing itself in the marketplace, engaging the community, building grass roots support and taking three years to embed itself before a ball was kicked. Compare this to Gold Coast United having three months to get things off the ground. Although they got the team up and running the fundamentals of establishing the club went horribly astray.

Community engagement – poor. Promotion – poor. Knowing even when a game was on? Very poor. These fundamentals were ignored and the gates suffered as a result. Gold Coast United hadn’t embraced the community and the community wasn’t interested.  A stadium with a capacity of 27,400 never got even half filled. The average gate in the first season was 5,500 fans. The FFA should have been in the marketplace doing all it could to assist, providing know-how and support to engage the community and make the club viable. However, it had its own fires to fight. Established clubs were going to the wall and had to be propped up to guarantee the league’s survival. Australia had bid for the 2018 and 2022 world cup and resources were being pumped into that campaign. Clive was on his own here.

Then there was the football culture to deal with. Fans were few but vocal in criticism of non-footballing decisions. Signing players was a nightmare as player agents and third parties muddied transactions. Sponsorship deals proved difficult due to existing relationships with FFA partners. Subscription television partner Foxtel had a strong grip on match scheduling giving no flexibility or consistency with game times.

Something had to give as the figures weren’t adding up. He may be a rich man but throwing good money after bad is not something wealthy people are wont to do. Star players were allowed to leave. Signing cheaper youth players with no third parties nor expensive agents became a priority. Stadium costs were reduced with stands being closed. The club was being hung out to dry. But here’s the kicker – all but two players were contracted until the end of this season. This is the clear evidence that an exit strategy was in place. But rather than wind things up and walk away with his tail between his legs, Clive wanted to go in a blaze of glory. He announced a 17 year old debutant as team captain, going over the head of the manager.

When manager Miron Bleiberg spoke out against this decision, they parted ways. Rather than get a new manager, the youth team manager was promoted. This was the catalyst for a series of rants and tirades against the FFA blaming them for all of footballs’ failures. After a recent dispute with the major sponsor, who happens to operate a hotel resort on land he owns, Palmer replaced the team shirt sponsor logo with the words “Freedom of Speech”. Billboard signage around the stadium was also replaced with this logo. The FFA hadn’t sanctioned this move and Palmer had broken agreements in his license. Surely someone who had studied law would be aware that breaching his agreement would have consequences. The FFA stripped Clive Palmer of his license and he was free.

No Asian football to develop his business with. However, when you consider Palmer underwrote the club to the tune of $18 million in three seasons there are far less expensive ways to win friends and influence people. His intention was to establish the club and give it over to the fans and walk away with his philanthropic pride. However, it’s doubtful he’d have walked so quickly had events not turned out so poorly.

As a parting shot, Palmer exposed a glaring, glaring error by the FFA. They had failed to register Football Australia as a trading name. Once registered by Palmer, some phone calls were made and Football Australia was launched. A press conference was called and the body set up to “examine good football governance” was unveiled. Compared to the Lowy Institute, the FA is a transparent body with the slogan “We kick harder”.  This body is extremely transparent. A full two weeks after the launch, it had no website, no listed phone number, not even a Facebook page (a website is now online however).

Clive Palmer was wooed by the FFA into investing in football as a way of building his reputation in Asia to promote his mining interests. Both the football business culture and a lack of support and transparency from the FFA discouraged him from becoming a long term stakeholder in the game. Rather than cut and run with a whimper he left in a blaze of glory.

There should be a market for football on the Gold Coast and had the club and the FFA worked better to engage the community the story should be of a long term future. Moves are afoot to keep the club afloat with a community owned model with some private ownership (link to the plans).

Here’s hoping the club stays afloat and Clive’s vision of a successful team on the Gold Coast becomes a permanent reality.