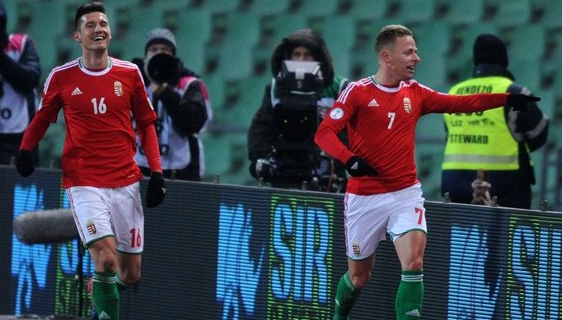 Hungary currently sit in second place in Group D of the European World Cup Qualifiers with a very realistic prospect of reaching their first major tournament in 28 years.

With group leaders Holland already out of sight, Hungary – perhaps the surprise package of this European qualification campaign – look set to do battle with both Turkey and Romania  for the holy grail of the runners up spot in the group and a two-legged playoff for a seat at football’s biggest table – the World Cup.

Hungary currently hold a one point advantage over nearest challengers Romania with four games remaining but could have had a greater advantage over their rivals had they not conceded a 92nd minute Romanian equaliser in Budapest in the latest round of matches. In spite of this disappointment, Hungary travelled to Istanbul to gain a valuable away point against Turkey just four days later.

Signs of progress began to show during the qualification campaign for Euro 2012 in which Hungary finished in third position in their group behind Holland once more and a strong Swedish team. Just four years earlier, the Hungarian national team had reached its lowest point – finishing sixth in their Euro 2008 qualification group behind Greece, Turkey, Norway, Bosnia and minnows Moldova.

Given the country’s recent footballing history, it is easy for many to forget that Hungary were once one of the game’s great powerhouses. Hungary finished as World Cup runners up in 1938 and 1954 and gained the nicknames “The Mighty Magyars” and “The Golden Team” in the Fifties as a result of their magnificent record between 1950 and 1956 in which they only lost one game – the 1954 World Cup Final.

The Mighty Magyars have been credited by many as the original exponents of “Total Football” which was never more evident than in “The Match of the Century” against England in 1953. Hungary’s superior technical ability and tactical approach to the game brought them a famous 6-3 victory over the English with World and European Player of the Year and Hungarian legend Ferenc Puskas excelling in front of an amazed Wembley crowd. Hungary’s performance that day spearheaded a revolution in English football and forced the England national team to adapt their coaching methods and tactical setup which had primarily been based on individual dribbling rather than the team pass and move game that had been perfected by the Hungarians.

Subsequently, the Hungarian national team has often succumbed under the weight of history in the modern era. In an attempt to eradicate this and to replicate the successes of yesteryear, The Hungarian Children’s Football Federation was created in 2008. Although still only in its relative infancy, this youth development initiative has already begun to bear fruit: Hungary reached the semi-finals of the Under 19 European Championships in 2008 and followed this up with a third place finish in the Under 20 World Cup.

Furthermore, the breakthrough of many of these Under 20’s into the Hungary senior set-up, coupled with a new state-of-the-art training facility has led to a recent upturn in fortunes for the Hungarian national side. While the World Cup in Brazil in 2014 may come too soon for this generation of Hungarians, the expansion of the European Championships to 24 teams in 2016 will give Hungary the opportunity to prove that the sleeping giants of European Football have finally awoken and that the Magyars can be mighty once more.

Aspiring football journalist and keen reporter on the 'off the beaten track' stories of world football.

4 thoughts on “The return of the Mighty Magyars?”