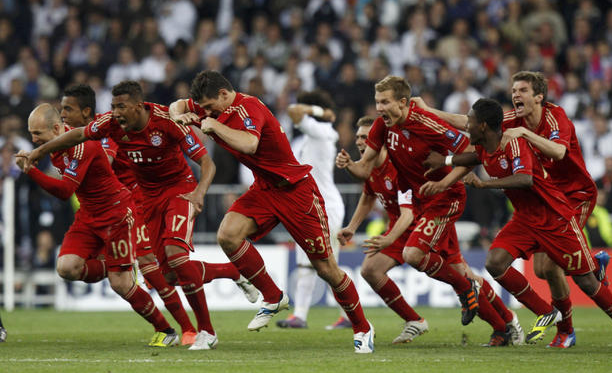 There will be no photo finish; no upsetting the odds or bashing the bookies. Across Europe, a series of one-horse races are slowly trotting to the end line, the jockeys’ arms already raised in glory, Champions in all but name.

Normally we malign the monotony of the ‘two-horse race’; two title contenders moving away from the rest of the chasing pack, neither being able to pull more than a length or two in front before being dragged level again. The rest of the teams are in the paddock while these sprint to finish.

This is, of course, generally a ‘European’ problem, oft pointed out when discussing the virtues of the almighty, all-conquering Premier League, especially in contrast to La Liga (‘Pah! It’s just Barca and Real!’).

Now, though, the one-horse scandal is spreading throughout Europe, and – much like suspect meat – has found its way to the UK.

Manchester United currently sit 15 points clear of closest challengers, and reigning Champions, Manchester City. The chances of them falling at the final hurdle are nil, with shorter odds available on Rafa Benitez still being in charge of Chelsea next term (and, let’s face it, there’s more chance of the Stamford Bridge tea-lady being offered the job (although she’d probably turn it down, due to the lack of comparative job security)).

In La Liga, the ultimate two-horse race, it has been the same story, with Barcelona 13 points ahead of Real Madrid. In fact, the story has become the two-horse race for second spot, between the two Madrid sides – Atletico and Real – although that now appears to have descended into a one-horse race in itself.

The Bundesliga, the shining beacon of all that is holy and great in European football, has arguably been over the longest. Bayern Munich had an unbelievable start, and the title was essentially theirs even before the winter break. Borussia Dortmund, winners in the past two seasons, have woken up in the Ruckrunde, but it’s too little too late: they trail the Bavarians by a mammoth 20 points.

Serie A appears closer on paper, with Juventus leading Napoli by, er, only nine points. In comparison to others, it has perhaps had slightly more edge to it, but this is a Juventus side that went unbeaten last season and have looked fairly comfortable for most of this one.

It is left to France and Portugal to provide the close-run championships this year, with Paris St. Germain, Lyon and Marseille separated at the top of Ligue 1 by seven points, the former often threatening to pull away (and, with their money and talent, so they should be) but not having managed to do so yet, although a five point lead over Lyon should suffice.

Porto and Benfica are in a straight scrap in the Portuguese Liga, separated from each other by four points, and by the rest of the league by 18 and 14 respectively.

The two-horse race has, seemingly, become two separate one-horse races. United, Barca, Bayern and Juve all have the title in the bag; City, Real, Dortmund and Napoli (albeit now under serious threat from Milan) seem to have secured second.

The battles for third and fourth are now the hardest fought. Three teams – Chelsea, Tottenham and Arsenal – have a realistic chance of third in the Premier League; four teams in Serie A will believe they can finish fourth. It’s the same in Spain, although the case could be made for a couple of others; In Germany, just three points separate fourth placed Schalke and ninth placed Freiburg.

There’s plenty of entertainment still to be found, and lots of individual, interesting mini-battles, not to mention various relegation scraps (particularly in the Premier League).

Sadly, though, for this season, the leading horses are halfway through their victory parade while the rest are jumping fences.

Unless you watch the Eredivisie, of course: the top four are separated by just four points. Alert the hipsters.

One thought on “The next equine scandal? The one-horse race”