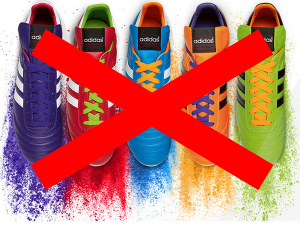 In recent years, the football boot has become somewhat of a fashion statement for footballers from Sunday League sides all the way up to the very top of the game. An aspect of the game that used to consist of merely choosing between brands is now a multi stage selection process.

First thing’s first: what brand do I go for? Nike, Adidas, Puma… The list goes on. Once you have chosen your designer of choice, a new question arises; what style of boot do I want? For example, if Nike is your favoured brand do you opt for the Premier Premium – a simple, yet stylish design. The Mercurial Vapour – a more flirtatious and perhaps risqué design. These are just two of the long list of styles offered by Nike.

Of course, Adidas could be the brand that tickles your fancy. So then you have to choose between a plethora of styles. The tried and tested Predator is one – A boot made famous by the likes of David Beckham who made kids all around the world believe they could ‘bend it like Beckham’ if they had a pair of his boots. The F50 is another – a more lightweight boot made for the trickier, more skilful players who rely on speed and close control to beat defenders and light up a match.

No matter how many new boots appeared on the market, one boot was always consistent. There was always one boot which never changed, it didn’t need to. This boot sold itself on consistency alone. Like a fine wine, this boot only got better with time. The more new designs that came onto the market and the more new colours that were being displayed on the feet of football superstars, the better this boot looked and the more it stood out.

This boot is of course, the Adidas Copa Mundial. A boot that oozed sophistication. Never has a football boot been more suave and cultured while remaining to be one of the most aesthetic around.

I am talking about a boot that has been as iconic as some of the greats who have played the game. The Copa Mundial has been the Pelé, or the Diego Maradona of the boot world.

A simple, black boot with the famous three stripes on either side and the words ‘Copa Mundial’ stitched parallel to the stripes. There was nothing more to it, there didn’t need to be.  This boot was a piece of art, appreciated by lovers of the beautiful game all over the world.

It never changed. For the football traditionalist it was reassuring to have that one boot that, in the midst of the rainbow world that is the modern-day boot room, that one boot that was always constant. Available in black with white stripes. That was it, there were no other colours needed. Perfection had been reached. It was simple, elegant, sturdy, everything you need in a football boot. A reverse of the boot was released as a special edition which wasn’t bad, it still managed to go along with what the Copa Mundial represented while at the same time, incorporating a touch of modern football, but not too much – just the right amount.

The romance surrounding the Copa Mundial was something that went above and beyond a clothing accessory. Owners felt a connection with them which would have you think they were more than what they actually were.

People say romance is dead, well, that has been proven to be the case in football too.

Adidas have released their new range of Copa Mundial’s and in the process, they have destroyed everything the boot represented. Now available in vibrant colours like orange, pink, luminous green, sky blue and even purple, the simplistic and traditional boot has been obliterated. In years to come, the colourful Copa Mundial will be seen as normal and the original beauty will be forgotten.

This is a sad day for football.