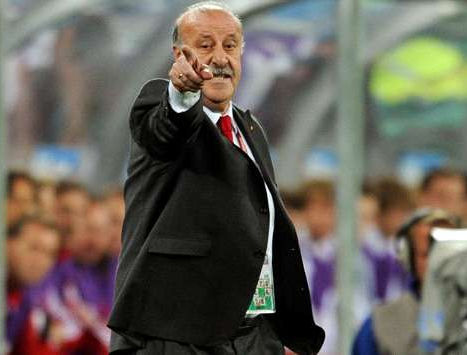 It is said that defenders possess a certain wit about them when it comes to football. They know which holes they are required to fill, They also know how to start attacks, know to keep the team glued together.

It is also because of this that a lot of players who have played at the back end up becoming coaches because they need to maintain a sense of calm, show a sense of leadership, and thus have an advantage watching the game from the sidelines. Most successful defenders go about quietly doing their job, and usually don’t get the media time their attacking and flamboyant attacking counterparts usually get. Few succeed as both players and coaches. Among these, even fewer attain legendary status like Salamanca’s greatest son, Vicente del Bosque.

Now as Spain’s national team manager, one can barely see emotions on the face of del Bosque. Not when his team is chasing a game, not even when his team is scoring goals for fun. Why there was barely any emotion seen when he conquered the greatest trophy of them all, the FIFA World Cup, one will never know. But one fact that is undeniable is when you come across a fine player of his generation who ends up becoming an even finer coach, indeed one of the best we have seen in the modern game.

Most people overlook something when they think of del Bosque – he played 400 odd games for Real Madrid, and in those 400 appearances he won 5 La Liga titles, 4 Spanish Cups and notched up about 15 goals in a 15 year period. It is interesting to note that a majority of the time that del Bosque played for Real, it was a period of political instability and Real Madrid were an object of all football related political hatred. However putting that into perspective, 5 Liga titles is an even more special achievement than what it already appears by itself in 15 years. Del Bosque also represented Spain 18 times. Little did people know then that this journeyman would go on to scale different heights from the touchline, and become a coaching legend.

The two most notable highlights in his managerial career that most people will undoubtedly talk about each time his name is mentioned both come at club and national level respectively – Real Madrid and Spain. Formally appointed in 1999 as first team coach, del Bosque enjoyed a trophy-laden four years at the Santiago Bernabeu, winning two league titles and two Champions League trophies, amongst other success in the Intercontinental Cup and various Super Cups.

Being at the helm for four years is quite a mean feat in itself when you factor in the rich and glorious history of a club notoriously known not to be patient with managers. More than titles however, it was the way he managed teams that made him standout as a manager while at Real Madrid.

In the middle of his spell, the club underwent a massive rebranding as the ‘galacticos’ era took centre stage, and del Bosque was equally successful in both the seemingly different types of times at the club. Under him, the club played a stylish brand of football both pre and post galacticos. With Redondo, McManaman, Raul, Morientes leading the former, and Figo, Zidane and co taking centre stage in the latter period.

However in 2003, in the single most impactful off-season in recent history for Real, Florentino Perez strangely did not renew del Bosque’s contract quoting reasons that the club needed a revamp of the image it showed of its manager. It is also well documented that after he was ever so swiftly let go, the club and the galactico policy suffered a catastrophic decline.

But his time as national team boss has proven just as impressive if not just vindicated of the hard work and skills he possesses as a manager. Replacing the combustiable Luis Aragones in July 2008, whose own four-year term was often littered with controversy, culminated in Spain ending over four decades without winning a major trophy by becoming European Champions in Austria in 2008. Inheriting his predecessor’s team was never going to be easy as they had grown accustomed to playing for Aragones, and eclipsing his achievement in 2008 would take some doing. But del Bosque did just that and went one better winning the World Cup two years later in South Africa, and in the process establishing Spain as the current dominant force in world football.

Often seen as a coach with more subtle skills, a man who creates his own environment, del Bosque is frequently referred to as ‘docile’, and yet although these are character traits, they are also a gross distortation for a man who takes a considered approach and sometimes lives up to his understated style.

“They say I don’t talk much”, del Bosque once said. “It’s not about how much or how little you say, it’s about saying the right amount.”