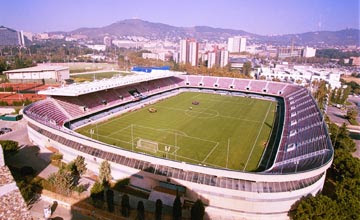 In 1982 the Mini Estadi, a stadium with a capacity of more than 15,000 opened its doors and has been the home of Barcelona’s prestigious youth system ever since, with the Barcelona B team playing their home fixtures at the ground that is located just next door to the infamous Camp Nou. Over the years Barcelona’s grass roots philosophy for nurturing young talent has seen them produced some of the finest footballers to have ever of graced the modern game.

Carlos Puyol, Xavi Hernandez, Andreas Iniesta, Victor Valdez, Pedro Rodriguez and Lionel Messi are all products of Barcelona’s youth system. Current Barcelona Head Coach Pep Guardiola, also a product of the youth system back in 1990, has the luxury of effectively cherry picking the select few from his B team whom he believes are capable of making the step up. Prior to Barcelona’s second leg tie against Arsenal in the Champions League back in March, Guardiola mentioned that whilst he admired Jack Wilshire’s talent, his B team possess several players who are of similar if not greater ability than the promising young English starlet. Such a statement may be considered an exaggeration of the truth, but in this instance Guardiola’s comments are completely accurate, as week in week out, Barcelona’s B team produce performances that are capable of emulating the brilliance of the first team.

Nowadays it is a rarity for clubs to acquire so many national players that have the ability to secure a place in the first team. Of the 28 players currently included in Barcelona’s B squad, 27 are home grown, Spanish players. Mexican midfielder Jonathan dos Santos, the younger brother of Tottenhams’s Giovani is the only foreign player currently a part of the B team. With a youth system that is dominated by up and coming Spanish players, is it any wonder Spain are at the top of the FIFA World Rankings? Perhaps it is time English Football attempted to replicate the success of Barcelona’s philosophy in order to begin producing English players that have the required talent to reach the peak of European Football. After England’s dismal World Cup performance against a German side littered with young talent, the FA needed to make decisions that would define the future success or failure at grass roots level.

During the 1990’s Manchester United’s produced some of the finest British talent. Ryan Giggs, Paul Scholes, David Beckham, Gary Neville, Phil Neville and Nicky Butt were all products of the Manchester United Academy. Since arriving at Manchester United in 1993, David Beckham has gone on to be one of the wealthiest and most recognised footballers in the world. Whilst Giggs and Scholes are continuing to shape the success of Sir Alex Ferguson’s side, despite being aged 37 and 35 respectively.

So why is that modern football academies are more concerned with scouring Europe and beyond in order to seek out talent rather than looking a little closer to home? It is our apparent loss of faith in our national prospects that has seen a decline in proportion of home grown players breaking into established Premier League sides.

Respective clubs academies hold the key to ensuring the future development of national players. The league structure in Spain is such that B teams, that are in effect the equivalent to English Reserve teams, are able to participate in the same league system to that of their First team. Both Barcelona and Villareal have B team’s competing in the Segunda Divisiom, which is the second tier in Spanish football. B teams are unable to be promoted to the Liga BBVA because they cannot compete in the same league to that of the first team. In addition to this, several B teams, including that of Real Madrid’s currently reside in the third tier of Spanish Football, the Segunda Division B. This system allows youth team players to gain credible experiences in a highly competitive field, thus preparing themselves for the step up.

Were this scenario to be replicated in English football, it would allow the top reserves clubs such as Manchester United, Aston Villa and Liverpool to perhaps compete in League Two and League One. By removing the North/South Divide that exists in the Premier Reserve League it could potentially pave the way for a whole new crop of players that have acquired the necessary experience in which to impart upon the first team.

It may be considered an option that is just not viable, but I think it is worthy considering given the current state of English football’s youth system. You only need to take a glance at Barcelona’s B team to recognise just how valuable playing at a higher level can be, Guardiola effectively has a reserve team that is a factory line producing talented young players who are seeking to surpass the current level of Barcelona’s irrepressible first team.

4 thoughts on “The Mini Estadi: The Jewel in Barcelona’s Crown”