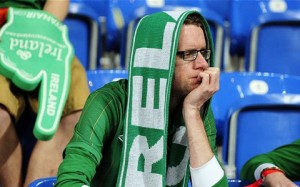 The Republic of Ireland football team has seen a steady decline in the past twenty years. Remember the days of USA ‘94 and Italia ‘90 when we had a team that could actually compete with and beat top class sides like Italy, albeit with a rather unattractive style of football.

So what has changed so much in the past two decades to see such a decline? And, more importantly, what can be done to make Ireland a force in international football in the future? In this article, I want to discuss how I believe Ireland can become a force in world football in the long term future.

I’m sure many will say that Ireland can never be a real force in international football and that we have to face our limitations. We should not take such a defeatist attitude. I believe the Ireland side can become a competitive force in football in the future but clearly several things need to be done. It will be a long term process but, if the correct structures are put in place, Ireland can qualify for major tournaments and realistically compete to win a European championships or World Cup.

Let’s briefly look at where we are right now. Obviously we recently had the introduction of the high profile managerial team of Martin O’Neill and Roy Keane. That’s all well and good but the players available to play for the national team are virtually the same as from the Trapattoni era.

O’Neill can try a few things:

(a) Bring in new players

(b) Try out players in different positions / roles

While (a) above is easy enough if you can find quality young players (Jack Grealish from the U21’s springs to mind if he ever fully commits to Ireland!), task (b) is more difficult and task (c) is next to impossible in the short term.

Let’s look at point (b) – trying out players in different roles. Players will always be more comfortable playing in the positions they play in regularly for their clubs. Asking them to perform in different roles from what they are used to goes against all their instincts. There can be new tactics implemented in the short term but that will only provide limited success.

What we need to see in the longer term is a new philosophy or way of playing the game. Clearly the current players cannot suddenly improve their technique overnight. It requires long term coaching and a change in mindset. Even if players tried to change the way they played, many simply do not have the ability to do so. It has been so ingrained in their fabric, a new way would be totally alien to them.

For example, how often have you seen Glenn Whelan receiving the ball in midfield and then passing it all the way back to the goalkeeper when he looks up and sees an opposing player in front of him? He has a fear or lack of ability (or both) of playing his way out of a tight situation. What we need to see in that situation is a player who is comfortable enough to hold onto the ball and make a short pass to a player close to him, then move and look for the ball back.

We need players who can control the ball easily and play in little triangles where they can get past opposing players and create space. Look at the way Barcelona or Spain can do this but don’t assume you have to be from Spain to master this technique.

In the current Ireland team there are very few players who have the ability to do this, possibly Wes Hoolahan and James McCarthy in the present squad. So O’Neill has a limited base to work off. Of course it is possible to make some progress in a couple of years but it will be very small.

What I want to see is a longer term structure put in place to change the whole mindset of young players and the way they are instructed to play the game. Football is played on a field for a reason – the ball should be in contact with the grass for the majority of the time, not skied up the far end of the field in a 50:50 contest between forward and defender. This is what we see far too often in Ireland international teams and the League of Ireland.

The FAI should encourage coaches to get their qualifications but, importantly, coach in such a way as to promote quick passing and control of the ball. Booting the ball a long distance to a striker should be completely discouraged. And that should clearly be instructed to young kids who are being coached. I’m talking here about kids as young as seven or eight years old.

Coaches should continue reminding them of the correct technique as they get older. Through constant re-enforcement of this quick passing and control method of playing, it will become second nature to them as they grow up.

Take a town where football is very popular such as Sligo. Children from that town who have any interest in sport should be encouraged to get involved with the local football team. If they show lots of enthusiasm for the game, they should be given as much support as possible to get involved with underage teams and stay in that sport alone.

They should continually be provided with the right type of coaching which can lead to them becoming players who are comfortable on the ball and better at passing. That goes for players in all positions, including defenders. Of course some players will be more naturally talented than others but that does not mean you cannot train good technique into all players, as long as it starts at a very young age and is a continuous process as they grow up.

In a 10 to 15 year period, we could see a situation where a group of very accomplished footballers will come through to play for their local club, Sligo Rovers, who could dominate the domestic league. The downside is that this will attract interest from scouts in the UK who, no doubt, will attempt to bring the best players over to England for trials.

While it would be better to see this new batch of players staying in Ireland, the money and attraction of playing for a top premiership club will lure them to the UK. That is inevitable and sadly realistic.

However the upside is that this new generation of players will form the basis of future Irish international squads. They will have superior ability and better technique than the current squad. They will be able to play their way out of awkward situations in matches by keeping the ball on the ground, passing and moving rather than hoofing it up the field and losing possession. This is the new philosophy that we should aspire to.

Clearly there is a difficulty in keeping young players involved in football due to the influence that the GAA has on sport in Ireland, particularly rural Ireland. That is why we must be able to convince youngsters to stick with soccer rather than going to play Gaelic Football or Hurling.

At some stage in their development (perhaps by age 13), schools should be able to require them to concentrate on only one sport, preferably football. It sounds harsh but is the only way to keep talented youngsters in the game and give them the time to fully develop into top class footballers.

This is not unprecedented. Take the case of ArdScoil Ris in Limerick. It is mainly a Rugby school and recently competed in the Munster schools senior cup final. They require their students to choose between Rugby and Hurling at a young age in order to allow them develop fully in one sport or the other. This is a sensible policy for schools to pursue and could easily be introduced in schools where football is widely played.

The long term future could be bright for Irish football but only if the correct choices are made from the beginning of a young players’ development. Just because we are a small country does not mean we cannot aim for the highest level of the sport. In the meantime, we will have to make do with looking to scrape through our qualifying group for Euro 2016 and, if we get there, to hope we don’t get another hammering from the likes of Spain or Germany.