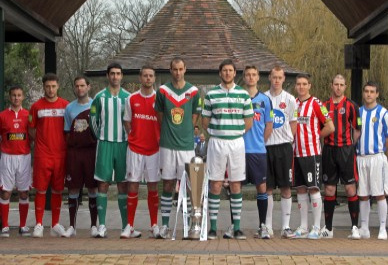 The League of Ireland (LOI) season kicked off at the  weekend. For the players’ in the LOI, it means they will have a source of income, for the next nine months that is.

The reality of the situation is that over 80% of players in the Airtricity League were on short term, nine month contracts last year i.e the duration of the playing season.

A vast amount of these players’ were faced with signing on the dole at the end of last season and his has led to the revolving door system in the league.

Professional Footballers’ Association of Ireland (PFAI) General Secretary’ Stephen McGuinness deals with the welfare of players in the LOI.

The PFAI offer players services including; career guidance, mental health and refereeing courses and McGuinness reiterated that “our main priority is to educate lads.” The PFAI receives no government funding and is dependent on a percentage of monies via image rights from Irish senior international players.

McGuinness also stated that “the only thing we (PFAI) can do in the off season is support players’ and keep them fit.” The PFAI recently had several friendly games for unemployed members’ against select teams’ from Sweden and Norway.

The PFAI General Secretary believes that nine month contracts “don’t allow the players’ to have an affinity with the clubs”. The prime example of this is at St. Patricks Athletic, where they have assembled a squad of 21 players. Only five of these were on the books at the Inchicore club last season.

The former St. Pats’ player went onto say “It doesn’t allow players to love their club, clubs cannot survive on a nine
month business model. If this was any other line of business it would ultimately fail.”

He also believes that “clubs should be looking three years ahead”.

Football writer with the Irish Examiner Miguel Delaney believes that “while nine month contracts might not be ideal, they are at least a
step along the line to sensible running of clubs.”

Miguel draws up parallels with the Irish newspaper industry saying “like with the newspaper, Irish clubs were being run on old business models which are simply inefficient and dysfunctional in the present day.”

In the past decade several clubs have had a severe fall from grace. Those that spring to mind are Shamrock Rovers, Shelbourne, Drogheda United and the late Sporting Fingal.

They all had the same plan, to rub shoulders with Europe’s elite. Shamrock Rovers have been resurrected by the club’s fans’ who established the now infamous 500 Club.

Although they’re financially sound, Rovers still take a cautious approach and offer the majority of their squad annual contracts. Highly talented former Manchester United trainee’ Conor McCormack has received a two year contract, but he is in the minority.

The future of the league remains to be seen. Delaney feels that clubs have “been forced down the road of self-sustainability”. In the past
decade clubs have relied heavily on private investment. Those days are gone. The football writer hopes this will make the league “more stable, even if that means there is a bit of a talent drain every year.”

Old rivalries like Bohemians and Shamrock Rovers will always be hotly anticipated amongst rival supporters. For the players though, it will be all about bringing home the bacon.

One thought on “The League of Ireland – The beginning of the end?”