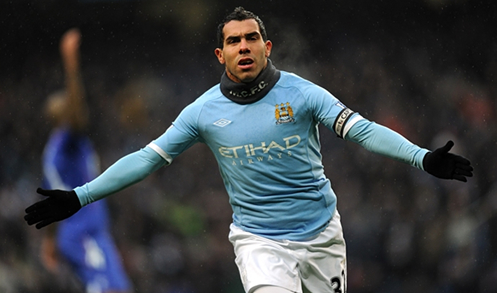 Carlos Tevez reiterates his desire to leave Manchester City, but giving his criticism of the North West, are we surprised?

The Argentinean is seeking a sharp exit from the club in order to resolve family issues, but with the club likely to demand in excess of £40 million and with his wages at an astronomical rate, there will be few willing to sign the insufferable, but talented forward. Like Tevez others have followed suit in order to seek pastures new.

When Wayne Rooney sent shockwaves around the Premier league and Europe, with the submission of a written transfer request, it raised questions about his motives whilst also highlighting an ever present aspect of modern day football, player power.

Manchester United were rocked by Wayne Rooney’s revelation and his apparent condemnation of the club for its failure to address what he believed was a lack of ambition. Skeptics amongst the media and supporters alike, identified financial gain as Rooney’s motives for what was in effect a ransom letter addressed to Manchester United’s owners. Now regardless of the outcome of the situation which saw Wayne Rooney sign a new long term contract, rumoured to be worth more than £200,000 per week, perhaps the most concerning part of the saga was the way in which Rooney and his entourage were able to threaten the club with such drastic actions.

In an age where football has become a multi billion pound sport and transfer figures along with wages have increased to an monumental level we are suddenly beginning to see how greed is engulfing the modern day footballer. Agents are often identified as the culprits for excessive player demands, and in the case of Wayne Rooney, Sir Alex Ferguson himself openly criticised the way in which Rooney’s business companions heavily influenced the young striker. It is difficult to berate any player who attempts to negotiate the best financially rewarding deals, because it is instilled in young footballers and let’s be honest if you found yourself in a position whereby money could fluctuate from club to club you are naturally going to seek to select a club that meets your requirements, whether it be bonuses, tax breaks or sponsorship benefits.

We are now is a position whereby we need to question how our own support of the sport that we know and love, is beginning to taint the vision of players. Ardent football supporters will at times reluctantly pay over the odds to simply watch your beloved team. Season tickets prices have risen, merchandising has soared and as such the amount of money that a football club can offer a player is continuing to rise. The supporters who are consistent season ticket purchasers and even infrequent visitors to football matches are now effectively lining the pockets of footballers and essentially funding their lavish millionaire lifestyles. There is no way of avoiding this scenario as it is a sacrifice that we as supporters have had to make to ensure the likes of the Premier League and La Liga remain at the pinnacle of world football. As much as we may not condone it we are given little choice, nobody wants to be forced to concede that they are no longer able to afford the absurd costs of attending a football match to support your team.

Although it is always intriguing to see how supporters of English clubs respond to criticism from the likes of Michel Platini when he suggests that the presence of foreign owners and players are damaging the reputation of our beautiful game. Influential figureheads at both UEFA and FIFA are incredibly unpopular with English supporters because they continually blast the Premier League and what they perceive as greed. We do not like what Blatter and co have to say about our league simply because they are addressing a problem that we see as an unavoidable aspect of football. We will continue to buy replica shirts, season tickets and club memberships because we can’t face the thought of giving up what we love. The lifestyles of our adored footballers will continue to rage out of control so long as we as supporters continue to shuffle through the turnstiles at our respective clubs.

So now that footballers find themselves in position whereby their assets are so highly sought after they are well aware that their own actions can influence their present club and alert of potential bidders. This season we have seen four major Premier League players threaten their club with a transfer request. Wayne Rooney has sparked this fiasco whereby players place their clubs in a position of indecision. Along with Rooney, Carlos Tevez, Darren Bent and more recently Fernando Torres have all thrown their respective clubs into disarray as they respond in a bewildered fashion be asking “Why?” How have football clubs suddenly found themselves in a position whereby they are faced with the decision to either accept the players request and transfer list them or simply pay up? After all how do you alter the opinion of a clearly discontent footballer, you throw cold hard cash at them and plenty of it? Albeit when Carlos Tevez handed in his transfer request he sighted family concerns as his reasons for wanting to leave, I’m happy to believe the Argentinean in this case, because it sure as hell can’t be financial displeasure that is influencing him, he is being paid my Manchester City for goodness sake, the club that pays far beyond sustainable figures and even offers to pay the tax that is so often referred to as the Premier League’s weakness when attracting world talent.

Darren Bent was the next striker to follow in the footsteps of Rooney and Tevez as he stunned Steve Bruce and Sunderland by demanding to leave the club after it was revealed Aston Villa had  made a bid worth close to £24 million. However unlike Wayne Rooney and Carlos Tevez he had the courage to carry out his conviction and within 48 hours of handing in his request he has passed a medical at the Midlands club. This situation alone signifies that how quickly a player can swap clubs. Once again Bent refused to accept that his move to Villa was based upon financial incentives, although he is now reported to be earning £70,000 per week, so the jury is still out on that one, after all at the time Aston Villa were firmly in the relegation zone and Sunderland were flying high in the Premier League with their sights set on a place in Europe. I mean I know footballers aren’t always gifted in the logics department, but surly Bent himself must of been aware of how bizarre his decision was given the circumstances. On the other hand  you may of chosen to praise Bent for his actions, maybe it is admirable that he has risked so much in order to train and play with footballers that he believes are of real class.

If Rooney’s announcement back in October didn’t capture your attention and Tevez and Bent failed to evoke any sort of reaction then maybe the most recent of wantaway strikers Fernando Torres has take you by surprise, if not, well I don’t blame you. If there is one person you can forgive for handing in a transfer request it is the Spaniard. Despite Kenny Dlaglish’s arrival at Anfield and Liverpool seemingly returning to form, the international striker its appears would prefer to make a sharp exit out of the club in this January transfer window. The thought may not have crossed his mind up until Chelsea launched an audacious bid worth in excess of £35 million and suddenly Liverpool found themselves in a position just like United, City and Sunderland, to accept or reject? Unsurprisingly Liverpool were quick to reject both Chelsea’s offer and Torres’ transfer request. However their defiance merely sufficed to to raise the transfer fee to in excess of £50 million, if a player is adamant they want to leave then it becomes a matter of price.

All four incidents surrounding wantaway strikes helps to reinforce the growing belied that ‘player power’ is so great that clubs are being pressured into ensuring the requirements of any high profile players are met to their exacting standards, if not then clubs risk losing their prized assets to the highest bidder. It is a sad state of affairs when someone with the calibre and expertise of Sir Alex Ferguson is made to effectively plea with the owners of the club to meet Rooney’s wage demands in a bid to keep him. Say what you like about the intelligence of footballers, but they certainly know how to negotiate themselves the most lucrative deal, albeit with the support of an agent who is more concerned with the final transfer fee of which they will receive their a sizable percentage. Contracts are merely pieces of paper that have lost all significance, if a payer is intent on leaving then honouring a contract becomes null and void.