An absolutely unbelievable match which encapsulated everything that is good about football. Passion, drama, excitement. It was one of the best matches in MLS history.

So yes you were right. This was that game between LA Galaxy and San Jose which ended 3-2 thanks to two goals in injury time by Salinas and Gordon playing with 10 men for 20 minutes. This heart thumping, nerve shredding match was played in front of a sell out crowd of around 50,000 at Stanford Stadium on June 29th which kept many on the edge of their seat. Going into the game nobody felt San Jose would somehow revive a moment of their 2012 form and win in their typically unfashionable, last ditch effort – but they did. Truly incredible.

San Jose have done something very similar before. On June 30th 2012 they were 3-2 down and looked like wounded soldiers, but their grit and determination shun through, leading the ‘Quakes to a miraculous 4-3 victory, if anyone thought that was one of the greatest MLS comebacks I bet they didn’t expect what was to come a year later. 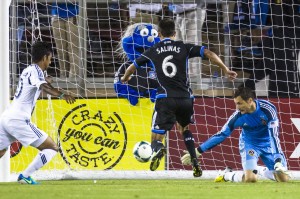 San Jose have been in relatively poor form throughout the season so far, in a surprise move Head Coach Frank Yallop was relieved of his duties to be replaced by his assistant Mark Watson. Watson gives off a slightly brutish aura on the touchline – perhaps that was what the San Jose hierarchy felt was needed – someone who would bring back that feeling of fearlessness and the motivation to push his players beyond the 90 minute mark. After all, last season San Jose netted a remarkable nine goals in second half stoppage time with eight of them leading to a win or draw. The phrase ‘The Goonies Never Say Die’ was being thrown around so often that people were beginning to get sick of it. That’s without mentioning the amount of times fans have to hear ‘Levels’ by Avicii going off every time the Bay Area side score.

San Jose gets regularly slated for their ugly brand of football, a bog standard 4-4-2 where route one is preferred over slick passing game. Strikers – A.K.A ‘Bash Brothers’ Alan Gordon and Steven Lenhart receive regular criticism for their incredibly aggressive nature (particularly Lenhart who many feel borders on the line of pure cheating). However, that doesn’t stop the two from changing their game. They are an absolute nightmare for opposition defences. Standing tall at 6’3 and 6’1 respectively, both are at it for 90 minutes, consistently bruising and battling their way past the opposing centre backs and do so with great success. Of course it is rare that both start at the same time when you have Chris Wondolowski on your ranks, perhaps one of the best poachers in the league (although his performances could be greatly improved this season). The pace on the flanks can be devastating with Honduran Marvin Chavez on the right and  Shea Salinas on the left constantly delivering balls into the box. It’s a very simple system, yet very effective.

As stated previously San Jose have been in pretty dreadful form this season considering their successes last year. A record of 5-7-6 is not exactly MLS Cup winning form however there are a number of reasons for why that might just be changing. The impending arrival of ex-US international Clarence Goodson should help in bringing some vital experience on the back line, complimenting the big Honduran Victor Bernardez whose gun ho nature led to his sending off in the 77th minute (although completely undeservedly in this case).

Furthermore, there are reports in England of the ‘Quakes landing ex-Celtic man ‘The Irish Messi’ Pat McCourt who, in my opinion, is worthy of being in the Celtic first team and will bring more flair and creativity to a very forward thinking side (literally).  San Jose’s style of play should also pay dividends in the CONCACAF Champions League where such a physical way of playing will be almost alien to a number of Central American Sides, the shock factor should certainly be in their favour. It is also notable that San Jose have been hugely unlucky with injuries earlier in the season with a number of fringe players getting regular game time. A new stadium currently being built for the ‘Quakes should also give fans, players and staff alike plenty of optimism with an increased crowd, it would make a change from having to resort to maxing out their capacity of 10,000 for every home game at Buck Shaw.

Anyway, the win for San Jose back in 2012 over LA was impressive, but to win with ten men and score not one but two in injury time when your form has been far from decent, the 2013 win will live longer in ‘Quakes fans’ memories. The match was chaotic, scrappy and at times, unbelievably ugly but it was one of the hardest fought victories ever seen in MLS. Yes, it’s becoming cliché but the Goonies truly do never say die and perhaps, just perhaps the fans won’t mind hearing ‘Levels’ being played a few more times.