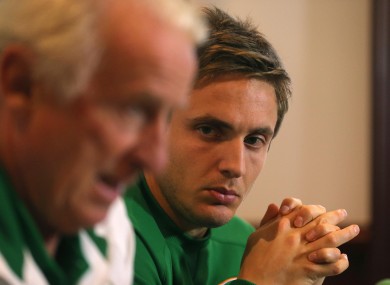 Tuesday 19 February, 2013 will go down in sporting history as the date that Oscar Pistorius’ bail hearing began and Bayern Munich outclassed Arsenal at the Emirates.

Perhaps, even for feverent Ireland fans, the fact that these two stories overshadowed a defining night for Kevin Doyle against Barnsley encapsulated the past 12 months for the Irishman.

After all, having failed to score since the 4-1 victory over Bristol City on 1 December, 2012 Wolves’ manager, Dean Saunders, not only dropped Doyle, but, also, plumped for 20 year old Jake Cassidy when taking off Björn Sigurðarson in the 84th minute.

Cassidy is already a big favourite of his fellow Welshman, Saunders, who replaced Ståle Solbakken on 7 January, 2013 and it is telling that the former prolific striker Saunders has conducted one-to-one shooting practice sessions with Cassidy only.

Doyle, meanwhile, remains an ardent discipline of Solbakken and has openly questioned Wolves’ decision to dispense with the Norwegian.

Perhaps, therefore, it was little surprise that not only has Doyle scored just one goal in the nine games he has featured in under Saunders, but, also, sought a loan move to Celtic in January.

It seemed it would be the final chance Doyle would have to join only John O’Shea, Darren O’Dea, Aiden McGeady and Robbie Keane as Ireland’s only current international footballers to have played Champions League football.

It was far from an unrealistic dream, either, as this was the forward who was tangibly linked with a £12 move to Juventus and Arsenal just three seasons ago.

Also, Doyle’s harrying, work-rate, channel operation and selflessness made him a rare breed of striker in world football.

Admittedly, the Irishman has not been synonymous for his goalscoring over the years, but having previously scored a respectable 36 goals in 86 games for Reading in the Championship in 2005/2006 and 2008/2009 his current form seems all the more worrying.

After all, in the Premier League in 2010/2011, Doyle was at his peak: thriving off the competition of Steven Fletcher for a lone striking role in Mick McCarthy’s 4-5-1 at Wolves and his impressive form in the second-half of the season was crucial to Wolves surviving.

Then, though, came a knee ligament injury on international duty against Macedonia on 26 March and Doyle was rushed back for Wolves’ penultimate game of the season against Sunderland, where he further aggravated the injury after coming on for Fletcher on 71 minutes.

Since this injury – coinciding with some desperate service from Wolves’ flanks – Doyle has netted a disappointing 13 goals and 13 assists in 86 games for club and country.

There is no underestimating the impact of this lay-off – with Doyle having scored five goals in ten games before it – and it clearly was a devastating blow.

After all, there is no disputing Doyle’s strength and mentality – having played in a six-pointer for Reading against Wigan on 26 April 2008, just minutes after discovering that his beloved cousin, Lorraine, and her two children were unlawfully killed in a house fire in Wexford. 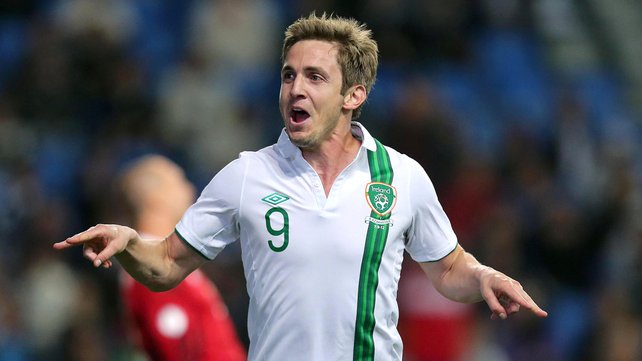 While it seems that Doyle’s recent performances for Ireland have not suffered – scoring two in two in September, including an assist and the crucial winner against Kazakhstan on 7 September – the Irishman is far from the first name on the team sheet that he always was under one-time keen advocate, Giovanni Trapattoni.

The blonde tips remain, as does the energy and chase, but there seems a haunted look to Doyle as he wonders around the pitch of late.

Perhaps, complacency has kicked in for Doyle and that is certainly how some Wolves fans view it – with Doyle having been awarded a new five-year deal in 2011 as a tactic by Wolves’ hierarchy to increase Doyle’s market value.

In truth, apart from an enquiry from Everton in January, 2012, this ploy has come to nothing and Doyle – fairly nobly given his wage cut since relegation – was committed, like with Reading in 2008/2009, to Wolves in the immediate aftermath of relegation.

Still, Wolves have been left with a spine of a team still haunted by an inconsistent and desperate past 18 months and have looked, worryingly, far below the pre-season predictions of automatic promotion.

It has left Doyle in a purgatory-like state and, quite bluntly, the striker is unlikely to play in the Premier League again and there remains the once-unthinkable possibility that Doyle could be lining out in League One next season.

For a man who should, theoretically, be at his peak and has proved the League of Ireland’s greatest export since Roy Keane, this is a remarkable.

Whether Celtic will revive their interest in the summer remains to be seen, too, as even though Neil Lennon is an admirer, the Northern Irishman favours a policy of blooding fairly obscure names with great potential instead of signing seasoned internationals on permanent contracts.

Of course, all may not be lost, with Wolves just one point from safety with eight games to play, but even if they do survive, it seems unlikely Saunders will build a promotion-chasing team around McCarthy stalwarts like Karl Henry, Sylvain Ebanks-Blake and, of course, Doyle.

Still, even in the meantime, it will be difficult for Doyle to not only continue to banish his goalscoring drought but, also, prove that he still has what it takes to lead the line to great effect.

Having scored his first goal for Wolves since 1 December against Bristol City on 16 March, international duty could have provided Doyle with a further boost.

However, even though there was a time when Trapattoni was far more likely to trust in Doyle than Shane Long, it is, in fact, Conor Sammon who has taken Doyle’s position in the matchday squad against Sweden on 22 March and Austria on 26 March:

He was not in his team. He could have gone to other teams and it didn’t happen. It hasn’t been a particularly happy time in terms of what he has been through at his club and also with his fitness. I wish to help him but maybe he needs to change clubs.”

With the blunt news coming via a text message from the aloof Trapattoni, it may well be the wake-up call Doyle needs but despite his 53 caps and rapid ascension from life as a lanky teenager at Cork City, there is a feeling that this is an unfulfilled, premature end to Kevin Doyle’s top-level career.

For all his unselfish, team-orientated play over the years, Doyle was always going to be outshone in headlines by more flamboyant names; now, he is in danger of being forgotten altogether.