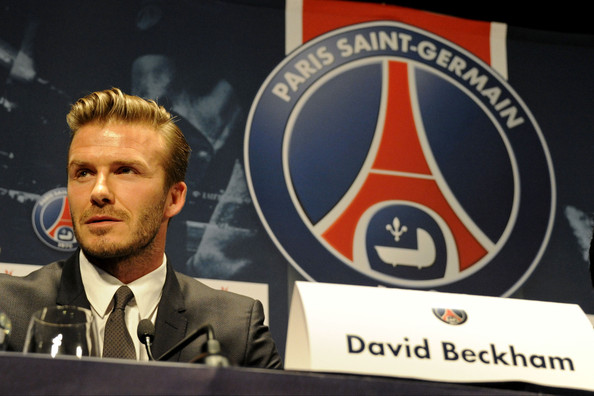 Six years on, there never seemed a starker contrast.

When the bleached streamline of David Beckham was presented to La Galaxy’s sparsely attended (5,700) Home Depot Centre on 13 July, 2007, his decadence from one of England’s great modern footballers into a figure of celebrity was firmly established.

With a crowd dominated by the world’s glossy media and ‘day-tripping fans’, it was a presentation centered on the notion of the Beckham brand which reflected Beckham, wearing a Ralph Lauren suit, not being unveiled for his footballing skills.

It had seemed Beckham had given up on his competitive footballing career, with top-level European football and reaching 100 caps for England submerged, unrealistic fantasies.

Of course, the five-year spell had much greater significance for Beckham’s footballing career than many expected: impressing in two loan spells with Milan in 2009 and 2010; making England’s 2010 World Cup squad but for a ruptured Achilles tendon; and being pivotal to Galaxy’s 2011 and 2012 MLS Cup wins.

Now, dismissing even more lucrative and brand-widening interest from the Middle East and Australia, Beckham wants one final taste of European football – signing a £68,000 per week, five-month contract with PSG.

The opportunity to win a Ligue 1 title and play in at least two more Champions League knockout matches was surely key, but this move seems a reverse of the Galaxy one in 2007 – encapsulated in Victoria Beckham remaining in London.

In 2007, Beckham seemed to write-off his top-level footballing ambitions, planning to make seamless transition into being a franchise owner after striving to see ‘soccer’s’ standing improve in the U.S by the end of his five-year spell.

Now, while it seems Beckham is desperate for one final European adventure with PSG, in actual fact, this could prove just as important a PR move as Galaxy was – without even addressing the €83 Beckham shirts that are already selling-out.

Sure, Beckham has not been in the class of Thiago Silva, Lucas Moura, Ezequiel Lavezzi and Zlatan Ibrahimović for some six seasons, but his professionalism and dressing-room leadership could be pivotal to a still-fragmented squad.

So, while there were fears over how Ibrahimović would feel about his poster-boy status being compromised, the Swede was keen to welcome Beckham:

For a striker, playing with somebody like David is a dream. He is the best deliverer of the ball in the world, still

He adds something in the mental aspect of the game as he’s very strong mentally. He is a real winner and that’s exactly what we need. He will help us a lot.

Also, Beckham – in donating all of his £3.4 million contract to a local children’s charity – has already charmed the doubters throughout the world who were cynical about the justification of the short-term deal.

It means, already, that the traditional, 1970s-originating PSG fans – who followed the team before Canal +’s revolutionary takeover in 1991 – have been won over by the selflessness of Beckham that Carlo Ancelotti and, particularly, Leonardo immensely value.

After all, the rest of France had readied themselves to learn of just how keen the ‘unethical’ PSG were to bypass Francois Hollande’s 75% tax on incomes over €1 million, for a 37 year old who last played in a non-MLS match on 14 March, 2010. 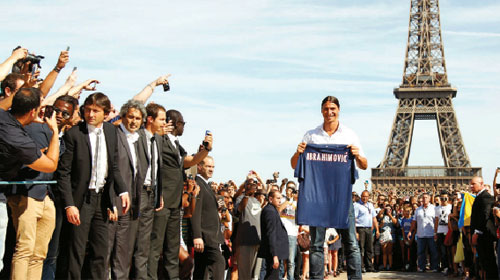 While Ibrahimovic has lit up Paris, improved PSG’s merchandising and marketing prospects and attracted a continental following to Ligue 1, many believe that the only boost QSI, themselves, have ever given the rest of France was in inadvertently boosting French inland revenues through eye-watering tax bills.

Admittedly, those who believe this often overlook the fact that it was QSI’s president, Nasser Al-Khelaifi, who was pivotal in bringing a fair and equal €150 million annual television deal to Ligue 1 on behalf of Al-Jazeera from 2012-2016.

So, regardless of Beckham’s £140 million net worth, his donation was an incredible gesture and nothing out of character given the Englishman’s work with Unite for Children, Unite for AIDS; Malaria No More; and the Elton John AIDS Foundation over the years.

It also gives Brand Beckham a whole new dimension, following the initial tackiness of the countdown timers ahead of his move to America in 2007, and in continually speaking of Qatar Sports Investment’s “project” throughout his unveiling, Beckham could well be around longer than five months.

After all, the Englishman repeatedly talked of the “long-term” and “helping to build one of the biggest powerhouses in football.”

That means one of three things: impressing enough in these five months to merit a one-year extension; joining Ancelotti’s backroom staff, having acted as a medium between players and coaches for Fabio Capello at the 2010 World Cup; or an ambassadorial role with PSG in, potentially, helping them secure an American franchise.

Given widespread English cynicism over the 2018 World Cup award to Russia and the 2022 award to Qatar, this could be crucial – with Beckham prevalent as an English ambassador in the 2018 hosting process just two years ago.

This may even lead to Beckham following the likes of Josep Guardiola and Zinedine Zidane in boosting the image of Qatar and the 2022 World Cup, without having been seen to compromise his credibility, directly, after previously turning down the chance to play in the Middle-East.

Still, with the Milan Lab having predicted that Beckham could play until the age of 38, this seems the perfect ending for Beckham in an environment moulded by Leonardo and Ancelotti, two key figures in Beckham’s first loan spell in Milan in 2009.

In his selfless donation, Beckham has already won the footballing public over – without addressing his admirable thirst for European football – and as a result, for one of the few times in his career, he will begin a contract with little pressure, skepticism or unwelcome attention.

For a final chapter in a stellar career, making a contribution to yet another domestic title and Champions League run is a fitting tribute to a man whose professionalism, fitness and high standards have never waned despite his undoubted celebrity.

One thought on “The final chapter: Beckham’s move to PSG”