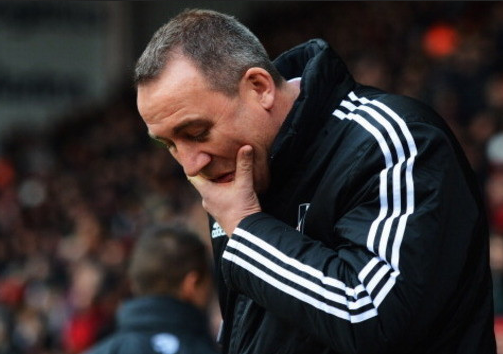 It’s been a bizarre week down by the Thames at Fulham where after two seemingly better performances than what we’ve been used to seeing from The Cottagers this season, first team coach Rene Meulensteen was sacked and immediately replaced by Felix Magath.

After a shocking run of results, Meulensteen was brought in to replace Martin Jol. Whilst results didn’t improve, performances did and the last two games against Manchester United and Liverpool proved that. So, when the news broke, myself and the majority of Fulham fans were rather shocked.

However, there are two theories to me as to why the Dutchman was replaced.

1) The shot of him and assistant Ray Wilkins laughing with the Fourth Official at Old Trafford (before Darren Bent scored the equalizer) was not impressive. I’m personally all for people laughing, but not when you’re stuck in a relegation battle and losing yet another game. He was lucky Fulham actually did get something out of it, perhaps more would have been made out of it if we didn’t.

2) The Fulham board had already had sacking Rene in their plans, they just wanted to give him the Manchester United and Liverpool games, because they thought we would be thrashed. This way, the new man coming in wouldn’t lose his first two games, and it could be a fresh start. It would look bad on the club and the new manager if he lost his first two games, and Fulham were not prepared to take that risk.

The most bizarre reason of the lot is letting Meulensteen sign five players in January and then sack him just two weeks later. Surely, surely he should be given a chance with the players he bought?

It’s also emerged that Lewis Holtby said in an interview whilst playing for Spurs something along the lines of “I’ve played under Felix Magath, so I can play under Louis Van Gaal”.

The appointment is a massive risk and I’m surprised at the timing of it. When you are submerged at the bottom of the table, conceding so many goals and losing so many games, the idea is that you keep the team spirit and team morale high. Sacking the manager for the second time this season certainly does not do that. It makes it worse. It now means the players have to restart, again. If sacking Meulensteen was what Fulham really had to do, then Alan Curbishley – the man who kept West Ham up in 2006-07 was sitting on the bench behind him. Instead they’ve gone for a completely unproven manager in the Premier League.

It’s been such an odd week at Fulham and only time will tell if the sacking of Rene and the appointment of Felix Magath will work. One thing is for certain, Fulham are still bottom, Fulham have still conceded the most goals and Fulham have lost 14 of their last 17 games. Constantly changing your manager does nothing to improve that record.