First, let me say this, the magic of the FA Cup is alive and well. Going into the semi final weekend the four remaining teams are Wigan, Hull, Sheffield United and Arsenal. What does this suggest? Well, contrary to what many have argued, it is not the big teams not taking it seriously.

There has been a myth going around for several years now which states that the FA Cup is not what it used to be – that clubs no longer cared, that top four meant more to the big teams, that smaller teams would rather lose late on than be faced with the prospect of a replay. This is simply not true. Just looking at it, Arsenal successfully knocked out three of the top six teams whilst of the two other casualties from the top six, City and Chelsea, one knocked the other out and then City were well beaten by plucky Wigan. No one could accuse any of these six teams of ‘not trying’ in any of these games.

Indeed, you only have to look at the heroic efforts of Wigan Athletic last year to know that it still “matters”. In fact I remember many Wigan fans stating on Sky Sports after their relegation that if at the start of the season they had been offered the FA Cup in exchange for survival they would have taken it unquestioningly. 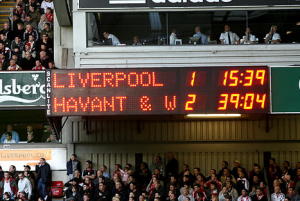 Furthermore, this year aside perhaps, there always seems to be a non league side reminding us what the FA Cup is all about. One doesn’t have to journey too far back to remember Crawley Town’s valiant efforts at Old Trafford in the fifth round – hitting the crossbar in stoppage time in a 1-0 loss, or indeed Havant and Waterlooville’s tragic plight at Anfield in 2008, leading twice before eventually succumbing to a 5-2 defeat.

And last season, Luton Town FC made history by becoming the first non league side to beat a Premier League team – winning 1-0 at Carrow Road in a game which should and will go down in FA Cup history. No, the magic of the FA Cup is most certainly not dead. However, the competition is in need of reform, otherwise the myth of it having ‘lost its magic’ may become a reality.

There are two major things wrong with the competition, the first of which is the obvious – replays. According to the FA, the main aim of replays is to give smaller teams a fighting chance. In theory, when playing a side in a higher division it would be unfair to expect them to be able to match this team over 120 minutes due to fitness levels. Makes sense I suppose, except in practice it has quite the opposite effect. Looking at results from this year alone; there has been a total of 30 replays with the team higher placed on the English football ladder triumphing 19 times, and even then out of the 11 wins gained by the lower placed teams, four of them were battles between teams from the same league. So, out of 30 replays – only seven times did an underdog manage to eliminate a team from a higher division.

There are other arguments for replays in that it gives home sides something to fight for when up against far superior opposition. For example, this year Blackburn Rovers were rewarded with a trip to the Etihad for their battling efforts at home against City. Yet, it occurs to me that Blackburn would’ve been far more likely to progress had they been able to push the tie to extra time at Ewood Park with the backing of the home crowd. Furthermore, often a replay is the result of an underestimation of the opposition from the superior team. What the replay then does is give the complacent upper tier side a chance to reevaluate their team selection and ensure the job is done properly after a short recovery period, a privilege which they arguably do not deserve.

Added to all this, European commitments and the existence of the League Cup means teams could potentially face over 70 games in one season, meaning the FA Cup could fast become a nuisance with replays adding up to five extra midweek games to an already heavily congested fixture list. So, with replays failing in their sole purpose and causing a host more problems such as fixture congestion and giving complacent teams a second chance when they deserved to lose at the first time of asking – this is one area in which the FA Cup is in desperate need of reform.

My second proposal is likely to be slightly more controversial but personally, I don’t think the semi finals should be played at Wembley. I am in full agreement with the principle that the semi final should not and cannot be influenced by a home advantage, but I just feel like the trip to Wembley should be special. Part of the allure of getting to the final and indeed the magic of it should be the opportunity to play at Wembley, but if clubs have already been there for the semis is that not slightly lost? The decision to host semi finals at Wembley was announced by the FA in 2003 as one way of helping pay back the £750 million spent on the new stadium, but since has been the subject of much criticism with David Moyes one of many to speak out against it.

For one thing, in the past distances to the venues could be adapted to suit both sets of fans’ needs. Just looking at the draw this year, Sheffield and Hull fans both face over a four-hour long trek down to Wembley when those journey times would be halved if they would just play the game at Old Trafford. What sense is there in having two Northern teams journey down to London, fearing extra time at risk of missing their train when there are stadiums well up to scratch much closer to home where fans could have a much better time of it. Then, if their team does make the final, they can make special arrangements for a journey which would be worth it.

For me, these two small changes could make the world of difference to a competition which whilst not in tatters, is certainly not at the peak of its appeal. Other proposals such as midweek FA Cup games or even offering the winner a Champions League place are probably too drastic and at risk of compromising what the FA Cup is about. We want our top four teams representing us on the European stage and with all due respect, Wigan do not quite cut it, not to mention the fact that the FA Cup should be prestigious enough to be worth winning in itself – we shouldn’t need to incentivise teams to take it seriously! By making it a passage to the Champions League it certainly wouldn’t solve the problem and may even add to it as it would devalue the achievement of winning the FA Cup – instead the victory would become about something else.

Midweek fixtures are also not necessary. There has never been any trouble until now in incorporating the initial rounds into the fixture list and if anything, FA Cup weekend can provide a welcome relief from week after week of league football. This is also not a long-term beneficial solution. On the other hand, he abolition of replays and limiting of Wembley to the final seem to me to have no down sides. Replays are failing in their aim and causing the competition to become a nuisance to many of the top teams, whilst with the stadium now receiving large revenues from hosting NFL games amongst other things the need for the Wembley semi finals is no longer there and many fans as well as teams would likely welcome the move. The FA Cup is the oldest competition in football history and as such has a huge amount of honour and prestige attached to it.

However, it is now the job of the FA to defend it. The way it is going, fans will no longer relish the cup but see it is an inconvenience whilst teams will be further and further pushed into playing weakened teams with the league simply considered to be more important. If fulfilled this would be a catastrophe and one that is easily avoidable. It is now up to the FA to take the right steps to protect this prestigious, historic and magical competition.