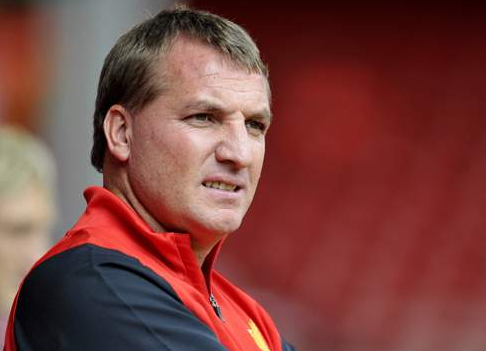 Football no longer consists of players frantically rushing towards the ball and subsequently pushing it further up the pitch instantaneously in an attempt to put one past their opponents. Long gone are the days of robust, gawkish defenders with no on-the-ball skills whatsoever, hoofing possession up the other end of the pitch in hope of a fortuitous ricochet or deflection off one of their counterparts, then somehow helping the ball find its way into the back of the net.

In recent years football has had a revolution, of sorts. A revolution in which players and managers alike have been dreaming up new ways of playing football. Ideas were plentiful, but the outcomes were seldom satisfactory. Until one day, a certain Rinus Michels brought into fruition the concept of Total Football. A mode of football in which possession and spatial awareness are key. ‘Totaalvoetbal’ as it is known in its country of origin, the Netherlands, was then groomed and perfected by Dutch and Barcelona legend Johan Cruyff, arguably Holland’s finest ever football export. Total Football laid the foundations for Tiki-Taka, which bereaves many of the same ideas as its predecessor, while adding in even more vital constituents which have helped mould Tiki-Taka into what it is today.

Tiki-Taka, an onomatopeic-sounding phrase, is becoming more and more commonplace in modern times. It involves a quick, sharp, pinball-like passing game, where players are constantly working non-stop to cover each other when out of position. Crisp, precise passing is key to this type of football working, and players with suitable attributes to take part in this style of football will flourish. The Spanish-preferred medium of football has been taken kindly to by most football critics, and it looks to be the way forward for futuristic, aspiring sides who may not be blessed with star quality.

A team deploying Tiki-Taka football does not have to consist of the best players in the world to be deemed successful, but rather a team of 11 players willing to play for one another for 90 minutes, and without wanting to sound like an overly-motivational Sunday-league side manager, they have to give it 110% from start ’till finish. This theory was proved more than adequately last season by Brendan Rogers’ former Premier League outfit Swansea, who managed to finish a respectable 11th in their first season back in England’s top tier.

But with even greater players capable of carrying out more alluring feats, come superior results. Barcelona are renowned globally for their dexterity in undertaking the role of being Tiki-Taka advocates and advertisers, making it look an attractive prospect to all viewers and onlookers. Many dream of replicating this enticing idiosyncrasy of football, but there is more to Tiki-Taka than meets the naked, untrained eye.

This is what a team’s setup should look like in possession in the case of Brendan Rogers Swansea side. 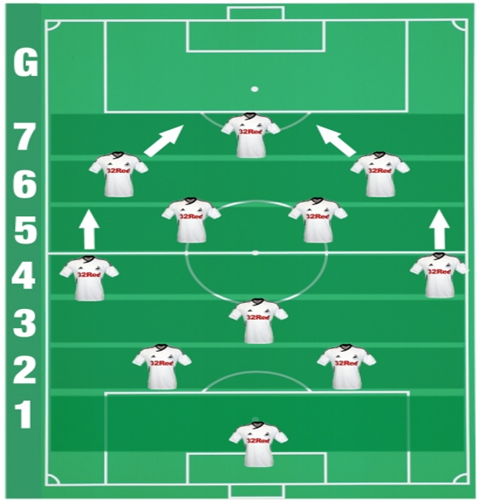 Zone G is the optimum zone to create chances and also make errors, as it will be easier to let your midfield and defense regroup while the opposing team decides how to use their possession. You may not have noticed, but there are a multitude of triangles created between these players in this formation, thanks to Rodgers’ well-thought out positioning philosophy. Each player has at least 3 viable options, 3 players open to receiving the ball at all times. This is where the triangles come into play. We all know that it takes three corners to make a triangle, and these three corners (being players) can ping the ball to one another quickly and accurately without having to make too much of an effort to make riveting runs.

Another essential component in Tiki-Taka football is the playing of the game with 11 men. Yes this might sound like you’ve heard it all before, but until Tiki-Taka was actually introduced, goalkeepers were largely rendered useless for most of the game. Their only use was to be on their toes while they watched the ball move around the pitch without actually getting a real touch of the ball. Playing this way, you might as well be playing with 10 men for large periods of the game. Exemplary footwork is a must for a ‘keeper playing in a side using Tiki-Taka, as teammates will look to bring the number 1 into the game as often as they can, when the ball is going nowhere. The ‘keeper is essentially a pressure reliever for his defenders when possession proving especially difficult to hold onto between zones 2, 3 and 4.

This is an example of Tiki-Taka in its element working for Spain against the traditional method of hoofing the ball up the pitch in a devil-may-care demeanour with no real direction, typified by Ireland (or whoever). The amount of incomplete passes for Ireland is unforgivable, due to their unorganized setup and method of spreading the ball inaccurately about the pitch. Spain quite blatantly take the cake here, as their style of football is impetuous. Boasting a 92% pass success rate, Spain are clearly one of the best in the business, and this is why they win so many of those coveted trophies. 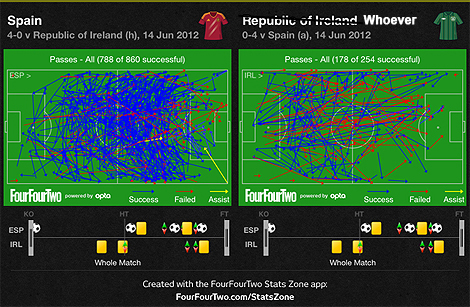 If deployed correctly, this type of football can win games, even if the opposition are stronger in terms of individuals. Tiki-Taka is an enthralling method of playing football, and it truly does portray itself as a huge advocate of the beautiful game.

This video provides a detailed description of how exactly Tiki-Taka is carried out in a match:

Love writing about the beautiful game, also an avid Liverpool and Barcelona fan. I run a football blog over at twogoalsoneball.wordpress.com

2 thoughts on “The evolution of Tiki-Taka”