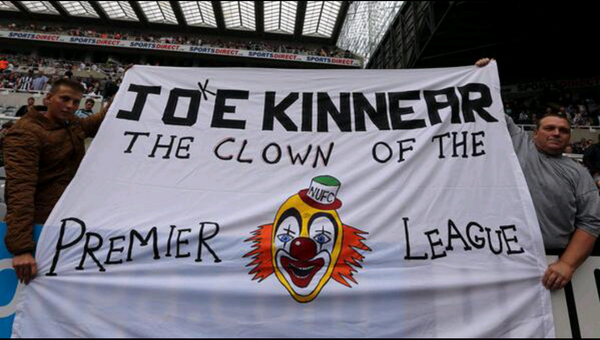 In what has been one the of most exciting Football League seasons for a long time, the action has been tempered with a variety of bizarre and outlandish stories and happenings, giving the folks at Sports Betting Dime plenty to work with.

Tyrannical owners, incompetent directors, useless managers and idiotic players have come into their own, in what has been a season almost unparalleled in its multitude of strange goings on.

Whilst there have been undoubted heroes, there has also been a selection footballing arch-villains that have hogged the headlines at various points this term. So who are they?

Joe Kinnear (The Man Brought in to Sign Players)

We kick things off with every Geordie’s favourite verbal punchbag, Joe Kinnear. The decision to bring Kinnear in as “Director of Football” was bizarre enough given his unpopularity with the Newcastle faithful after an awful spell in charge around five years ago. Even more bizarre was the confusing and frankly disruptive way Kinnear entered the club in June, following an embarrassing interview of Talksport (during the course of which Kinnear told a host of flagrant lies about his career achievements).

What tips things over the edge is Kinnear’s latent failings in his role. Drafted in to buy players, the ex-Wimbledon boss failed to make a single permanent signing, in his eight months at the club (whilst in the same period selling Newcastle’s most valuable asset, Yohan Cabaye to PSG) before he resigned at the start of February this year. An utter idiot, and an utterly idiotic mistake from the Newcastle board.

Chico makes the list off the back of his pathetic reaction to an accidentally flailed arm by West Ham striker Andy Carroll a short while ago. Chico’s dramatic reaction was almost Oscar-worthy. As he was flicked on the forehead by Andy Carroll’s forearm, Chico collapsed like a sack of spuds clutching his face and adding a few rolls to boot. The result? A red card for the West Ham talisman, and worse a failed appeal. It seems that cheaters do sometimes prosper.

In a season where crackpot owners have really come into their own, Hull City (Tigers?) chairman Assem Allam really stands out. Any multi-millionaire business owner who chooses to invest heavily in the Kingston-upon-Hull area deserves some attention, and Allam really does seem to fit the stereotypical mould of “crazy foreign owner”. Allam broke the first rule of chairmandom when he defied his clubs fans and traditions by insisting on changing the clubs name to “Hull City Tigers” (cringe), even threatening to leave the club if the FA does not back him on his decision. Admittedly, Allam’s saving grace is his generous transfer kitty which he provided for Steve Bruce and his scouting team over the summer- the benefits of which should see Hull more than comfortably maintain top flight status.

I don’t really need to say much more do I?

All involved in the Coventry City debacle (SISU OUT)

A serious matter this one. The shocking situation at Coventry continues, with the heart of soul of the football club being slowly ripped out. Forced out of their stadium and city, with a ten point deduction and a paper thin squad by a mixture of stubborn and selfish ownership and shocking management from the Football League, Coventry find their future hanging by a thread, and a very thin thread at that. A damnable situation from which only the supporters, players and outstanding manager Steven Pressley can come out of with any credit- with the club against all odds challenging for a play-off spot.

My initial reaction when Di Canio was appointed by Sunderland was that of  trepidation. I seriously doubted the Italian’s mentality to be a top flight manager. How right I was. The ex-Swindon boss’ seeming insistence on being centre of action and chronic attention seeking severely affected his Sunderland team. Mix that in with a whole host of shocking signings (Valentin Roberge anyone?), and a bizarre aggressive streak and you have a nightmare situation. Di Canio quickly proved himself to be nothing short of a vicious, bouncing loony at the helm at Sunderland- plunging them into a relegation scrap, and sacked after only five games this season. A true idiot.

Continuing the trend of dodgy owners, Massimo Cellini is a relatively new name in English football. The Italian burst onto the scene a couple of weeks ago as the perspective new majority shareholder of Leeds United, and it has quickly become clear that this colourful agricultural entrepreneur is quit a character.

Already twice convicted of fraud in his native Italy, and awaiting trial for a charge of embezzlement, Cellini evoked the wrath of Leeds fans by attempting to sack popular manager Brian McDermott, even before he had been instated as owner. One hopes that the Football League fulfil their duty and prevent this fraudster from becoming owner of such an illustrious (or any) football clubs.

If they don’t difficult times ahead for Leeds…

A string of average performances (with a stunning goal against Manchester City the only bright moment) saw Osvaldo expressing his desire to leave Southampton as early as October, that is two months after they signed him. Two months later, Osvaldo got his wish- but only after head butting team-mate Jose Fonte on the training pitch completely unprovoked to force a move.

As someone who looks like a pirate, one would have thought the Italian would have loved it by the sea on the sunny south coast. Clearly not. Osvaldo is now languishing at lowly Serie A Champions and Champions League contenders Juventus. Sigh.

Nicolas Anelka has been nothing short of shocking (in every sense) since his arrival at West Brom. Starting with a string of stinking performances (amongst the worst I’ve seen in an Albion shirt), Anelka has done everything to confirm many people’s prejudices against him, namely his laziness, arrogance and lack of work ethic.

Further still, Anelka then managed to insult the whole of the world’s Jewish Community with his idiotic “Quenelle” gesture at Upton Park in late December, cementing his status as true pantomime villain. Whether the gesture was meant in a racial way or not, it is impossible to believe that “Le Sulk” did not know the connotations it carried- and I will not defend his idiotic actions which betray the values that the club once (and still do) stood for.

The only thing more lamentable than Anelka’s gesture was the actions of Albion’s kit sponsor, Zoopla- who withdrew their sponsorship deal in a publicity stunt off the back of “La Quenelle”. A villainous  exploitation of a serious situation.

Vincent Tan (The Embodiment of Evil)

In terms of arch-villains in English Football, Malaysian businessman and Cardiff City owner is the Godfather. Tan has a number of blood-curdling footballing crimes against his name, including the re-branding of Cardiff City (discarding the clubs tradition), his laughable knowledge of the game (it was alleged that Tan tried to sack goalkeeper David Marshall for “not scoring enough goals”) and his horrific football shirt/glasses/blazer/moustache combination.

However, what turned Vincent Tan from playful idiot, to brutal footballing dictator was of course his inhumane treatment of Cardiff’s favourite son Malky Mackay. His public threat to Mackay about his impending sacking was nothing short of disgraceful, and his alone was enough to turn most of the footballing community against him.

Now, with his new man Ole Gunnar Solksjaer in charge, Cardiff are looking increasingly troubled at the foot of the Premier League. Maybe a relegation will see Vincent Tan return to his evil lair for good…