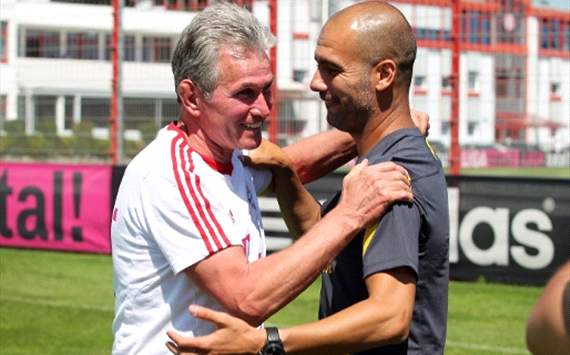 To some, it will appear the easiest job in world football.

Taking over the Champions League winners, whose first XI have an average age of 26; weakening Borussia Dortmund in bringing in the likes of Mario Götze; and, seemingly, having the hierarchical stability to channel Bayern Munich’s golden era of the mid-‘70s.

However, there are various intricacies and sub-plots that make the incoming reign of Josep Guardiola as Bayern Munich manager all the more intriguing – something few, even he, imagined when he was appointed in January.

After all, given how this Bayern crop have often been criticised for their lack of composure, it was feasible that the Osram, Jupp Heynckes, would have been destabilised over the ill-timed confirmation of his retirement.

Remarkably, that is without even addressing the horrors of penalty heartache against Chelsea on 19 May, 2012  – which scarred this Bayern team, arguably, even more than their 1999 equivalent in that 2-1 defeat to Manchester United.

Instead, at times in 2012/2013, Bayern have been irresistible: almost signalling the end of the era of tiki-taka with their fast-paced, telepathic countering and superhuman pressing.

As a result, even with the diminutive Götze’s incoming arrival, Bayern serve as an intriguing evolution, rather than antithesis, to the Barcelona prototype.

The likes of Dante, Javi Martínez and Mario Mandžukić are towering figures yet are far from the pedestrian tempo figures like Zlatan Ibrahimović that Guardiola has struggled to integrate in the past.

Also, given how Guardiola was always criticised for his failure to shore up Barcelona’s defensive set-pieces and, seemingly, refused to ever have a Plan B when games were tight, having an XI with an average height of 1.83m (6ft) is an intriguing thought.

Of course, in a marked contrast to the initial welcoming of his refreshing rejection of Chelsea’s advances last winter, Guardiola has been criticised for refusing to test himself in a more competitive title race and not creating a more challenging dynasty.

However, like José Mourinho with Internazionale in 2008, this is a crucial step in Guardiola’s career.

Having left home at a telling time, like Mourinho with Chelsea, and seen his side struggle in his absence, Guardiola can use his next move to cement legacy after a fairly disappointing – by his standards – final season at Barcelona.

Just as Mourinho failed to deliver a Champions League or a Premier League in his last full campaign as Chelsea manager in 2006/2007, Guardiola followed suit in 2011/2012.

Doubts lingered, with Guardiola having been outfoxed by Roberto Di Matteo – a seeming tactical novice – and his crude but incredibly well-executed gameplan with ten-men in the Camp Nou on 24 April, 2012.

Then, there was the fact that Guardiola failed to rally Barcelona in those final months of 2011/2012, having seen his side, arguably, play some of the best football of his three-year reign in the first-half of the season.

The reliance on Lionel Messi; the failure to address the nougat of a soft centre; and the inconsistency of the flanks are all problems that have lingered in Guardiola’s absence after he failed to fully address them.

Also, coming to Bayern was seen as a safe bet, seemingly confirmed by their standing as Europe’s greatest team, but there is a challenge in that in itself.

After all, Guardiola is far from the placid figure that Stefán Kovacs was when he took over from Rinus Michels – halfway through Ajax’s legendary cycle – in 1971.

To take just one example, just as Louis van Gaal did with Robert Enke, Guardiola is sure to insist on an even higher line and Neuer as an out-and-out sweeper ‘keeper.

Little will be left completely untouched.

Kovacs took Michels’ totalvoetbal blueprint and tweaked it for even more creative, and dressing-room, freedom for the likes of Johan Cruyff, Piet Keizer and Johan Neeskens.

Guardiola, though, with his immense passion and steely persona, is not going to rest on Heynckes’ laurels of Bayern reaching three Champions League finals in four seasons.

The Catalan, somehow, will aim to elevate this Bayern side even further to win, at least, two of the three next Champions Leagues and overtake Bob Paisley in winning four Champions League titles.

However, given the unpredictability of next season’s campaign – with Manchester United, Chelsea, Manchester City, Real Madrid and PSG all having new managers – Guardiola will be seriously scrutinised by an intense German media.

Remarkably, that is without even addressing die Dinosaurier:  Franz Beckenbauer, Uli Hoeneß,  Karl-Heinz Rummenigge and, to a lesser extent, Mattias Sammer

So, while all four of the above-mentioned are unquestionably delighted with the coup of Guardiola, the Catalan is likely to have to deal with their criticisms on a single, random basis – given their erratic outspokenness and differing job titles.

Therefore, the fellow outsider (never played for Bayern) and similarly-aged (45) Sammer will prove crucial to Guardiola’s three-year project succeeding – not just because he is sporting director.

With Guardiola learning German since November, 2012, it is clear that not only is he weary of a Trapattoni-style, 1998 loss of the dressing-room, but that he has been in contact with Sammer about the likes of Götze and Lewandowski.

This dedication has also been reflected in the absence of Guardiola’s trademark rolling contracts as while they were understandable at Barcelona – due to the unpredictability of being a coach, friend, politician and peacemaker – they brought unnecessary stress to the Catalan.

So, while Guardiola is unlikely to break from Béla Guttmann’s theory of a three-year term, he is certain to give all of his footballing passion to making more history: helping Bayern become the first side to retain the Champions League.