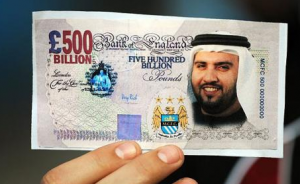 Over the last few weeks, we have examined the different ways in which football has changed since the 1980s, from a sport riddled with financial strife, into the multi-billion pound industry that it is today.

Yet that doesn’t tell the full story as to view football as a business in entirety, you need to understand the cumulative effects of the formation of the Premier League, increased TV revenue, the effect of the Champions League and the seemingly ceaseless demand for higher level games.

So now that football is big business, what effects have all these different factors had on the game and how is it evolving at the higher and lower levels today? Let’s take a look:

When Blackburn Rovers celebrated their only Premier League title success back in 1995, that success came on the back of the money of steel magnate Jack Walker. The Rovers Chairman bankrolled the Lancashire side, funding the entire redevelopment of Ewood Park (£20m), plus the signing of several star players, such as Alan Shearer, Chris Sutton, David Batty, Graeme Le Saux, Tim Sherwood, Stuart Ripley and Tim Flowers which added a further £25m to the bill.

By the time the Walker Investment Company ended their interest with Blackburn Rovers in 2003, it was estimated that Walker and his investors, had ploughed £100m into the club.
Yet this frightening sum of money is dwarfed by the money that is being poured into some clubs today by some of the world’s richest men.

Chelsea’s Russian owner Roman Abramovich arguably started the ball rolling when he invested heavily in Chelsea. The Independent reckon the Russian Oligarch has spent a total of £2 billion in his ten years in charge at the club and the relative success that has brought (two league titles and one Champions League triumph) is seen as a viable return for one of the world’s wealthiest men.

Manchester United were taken over by The Glazers in a somewhat complicated and controversial deal which saw one of the top three clubs in world football in terms of revenue loaded with debt as part of the takeover process. It is a debt which seems to be taking a toll on United, certainly in terms of their player spending over the past five years.

Certainly the biggest investment in the Premier League in recent times has come at Manchester City, where Sheikh Mansour’s takeover has propelled City, a club who had a reputation as perennial underachievers, into the big league, both domestically and in Europe. The new owners signalled their intent when on the same day they were confirmed as new owners, the final day of the 2008 transfer window, the club agreed a British Transfer Record fee of £32.5m with Real Madrid for Brazilian striker Robinho.

The level of Sheikh Mansour’s investment in City is astonishing; he wiped out the clubs £305m debt, setting aside £500m for transfers in 2008, regardless of what the club made or lost during that two-year period. He has invested in the entire redevelopment of the Eastland’s including a new £50m training facility, a leisure complex and in that time has attracted many of the world’s top players, such as Sergio Aguero, David Silva, Samir Nasri, Vincent Kompany and Fernandinho to the club.

Yet it is not just in the Premier League that big investors are hovering. Qatar Investment Authority, led by ex-Tennis professional Nasser Ghanim-Al-Khelaifi have bought a controlling stake in Paris St Germain and have a five-year plan to take PSG to the top of European football. Since taking over the club in 2011, PSG have spent over 350 million Euro’s signing the likes of Edinson Cavani, Zlatan Ibrahimovic, Lucas Moura, Javier Pastore and Thiago Silva to the club.

Yet not all mega takeovers have a happy ending. In 2011, Dagestani billionaire Suleyman Kerimov bankrolled at vast expense a swathe of signings for Anzhi Makhachkala including the likes of Roberto Carlos, Yuri Zhirkov and Samuel Eto’o (reportedly on the world’s highest annual salary of 20.5 million Euro’s per season).

Yet by 2013, after underachieving in Russia and in Europe, Kerimov’s health deteriorated and so did the clubs fortunes. A huge fire-sale began with huge numbers of players, bought at a cost of hundreds of millions, sold to rival clubs across Russia and Europe for cut price fees, simply to drastically reduce the clubs wage bill.

What is undeniable is that these mega-investors would not have been so keen to invest so heavily in football at the highest level, without the trappings and wealth of success at that level. Football philanthropy is in short measure and the world’s richest men are seldom likely to spend millions on what amounts to a “bad” business deal.

The other aspect of this investment from outside of football is that the money coming into the game continues to grow, which keeps wages spiralling, transfer fees soaring and turnover increasing at the top clubs who dine at European football’s finest table.

2. Polarisation – closing the gap or widening the divide?

With the vast amount of money in football nowadays, surely clubs are better off?

Certainly, in the upper echelons of the game, at Champions League level for example, clubs are enjoying almost unheard of wealth compared to the 1980s and 90s. Teams like Real Madrid, Barcelona, Bayern Munich, Manchester United and Chelsea are seeing their annual turnover set new record levels year upon year.

In 2013., Real Madrid became the first club to turnover half a billion dollars in a single financial year, projections are that Barcelona, Bayern Munich and Manchester United could be set to follow. The revenue of the top 20 teams rose by eight per cent in a single season.

Yet at the other end of the scale, many clubs are struggling. Although there is more money in the game, the wealthiest and most successful clubs are taking an even greater percentage of the pie, leaving the majority of clubs, the smaller clubs, with a far smaller proportion of the income.

In a recent study by the BBC, two-thirds of football league clubs who responded said they are worried about the financial health of clubs at lower level. 75% are experiencing a decline in attendance and over half the clubs questioned said that players high wages were a real problem for their club.

So you are left with this paradox; more money than ever in the game but only the elite few having their hands on the purse strings, while the silent majority are forced to fight for the crumbs of comfort that the richer clubs drop from the table.

Rather than close the gap, money coming into football has only sought to widen the divide between those who have, and those who have not. Which is why the onus on teams now is to get into the Premier League and then into the Champions League, rather than chasing, for example FA Cup glory.

Football as big business has changed not just the game, but how players perceive value. For many players now, a fourth place in the Premier League and qualification for the Champions League, is a far more worthy goal, than winning a domestic cup competition.

3. Who is making the big money?

So with all the money in football, it is undeniably a big business, but who is making the money?

It’s not difficult to fathom, the players at the highest level are now paid better than ever before as Wayne Rooney’s stellar new contract at Manchester United clearly shows.

In 1994-95, the average Premier League player earned £116,448 a season. By 2010, this had increased by over £1 million pounds a year. That figure is only likely to have increased in the four years following the publishing of this data.

It is therefore evident that the players and their agents at the highest level are now earning far more from football than ever before. But so are the directors and managers, who are also earning six and seven-figure salaries in their droves.

Football is undoubtedly big business, but at its heart is a game that is based on support and a love for a fans local team. While the telephone number figures and wage bills may be meaningless to the average fan struggling in the midst of a global economic recession, perhaps the real romance of football is now found at lower levels.

A quick glance at the yearly accounts for Accrington Stanley will give fans of bigger clubs a salutary lesson as to why football may be big business, but it only remains so for a relatively few teams.