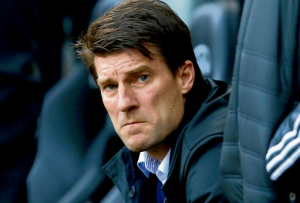 For all the plaudits that have come the way of Swansea City since its accession to the Premier League, Tuesday night brought with it the cold realisation that there is no immunity to the foibles of that precarious landscape. Arguably the best-run club in the English top flight, Swansea has now seen fit to dispense with the services of Michael Laudrup as manager.

That his sacking comes as no great surprise is ostensibly attributable to a woeful run of league form: a single win in 10 games was secured at the tail end of last month. That result may have proved crucial in shielding City from the mire of the relegation places but it appears, nonetheless, to have been a futile gesture. Indeed, the decision to jettison a man regarded with reverence in the not insignificant hotbeds of Turin, Barcelona and Madrid, had a whiff of stolid inevitability about it.

The team’s league position wants for a similar surety. Sitting in 12th, a mere two points separate them from West Ham — the opponents in a shambolic defeat on Saturday — and a spot in the ruthless micro league of the bottom three. The blazing form of Sunderland, buoyed by renewed self-belief, represents a particularly vigorous run at safety as the Welsh outfit seems trapped in a downward spiral.

That being said, the situation is far from a hopeless one. With 14 games to play, a large portion of the league season remains contested and it is for precisely this reason that the club’s lauded chairman, Huw Jenkins, has pulled the metaphorical trigger with clinical speed.  It is the first time a Swansea manager has relieved of his duties since 2004 but the nature of the descent has surely alarmed the powers that be within an operation known for its rare combination of sense and class. The spectre of Championship football, however, can often have a bracing effect on an otherwise stable setup. As far as Jenkins is concerned, the slide is to be arrested, immediately, while a margin for error still exists.

The accepted wisdom in the game, and a phenomenon lacking any kind of satisfactory explanation, is that a managerial change invariably signals a short, sharp jolt. Whatever the rationale for such truisms, Swansea require an injection of energy.

Laudrup was a true great on the pitch and it was certainly an advantageous reputation to possess at the outset of a new career. Following his retirement from playing in 2002, he landed managerial posts with Brøndby, Getafe, Spartak Moscow and Mallorca; hardly a trifling list. His arrival in South Wales during the summer of 2012 was seen both as an indication of Swansea’s new place on the footballing map and a positive reaction to Brendan Rodgers’s departure for Liverpool.

The slick tactics of the previous incumbent remained though, perhaps tellingly, reports of dressing room unrest soon surfaced, strengthened as they were by initially stuttering results. Laudrup would persevere admirably and his appointment was vindicated by the roaring victory over Bradford City in the Capital One Cup final. As he was tossed into the air by his triumphant charges, the early detractors were silenced by the considerable success of Swansea’s first ever trophy. Given his heritage, the subsequent speculation about a future in Catalonia was somewhat understandable. 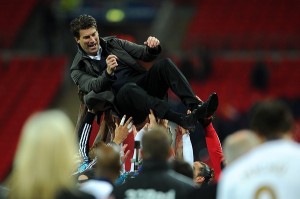 Yet by the conclusion of the tepid display at lowly West Ham – sealed with the spectacularly unedifying image of Chico Flores plumbing the depths of the sport’s darker recesses – the sheen of that Wembley victory was undoubtedly faded.  Rumblings of discontent had already become noticeable again this year; the training ground fracas involving Flores, veteran defender Garry Monk (now, awkwardly, the Spaniard’s interim head coach) and a brick will not have helped allay the increasingly loud reports of disillusionment with the Dane’s training methods and management style.

As ever in these recurring situations, injuries and form have conspired to rob Laudrup’s side of the verve which so defined them in recent seasons. An injury to goalkeeping star Michel Vorm has weakened the back line and the loss of Michu, a truly outstanding footballer, has effectively hobbled City’s otherwise clever forward motion. Summer signings Wilfried Bony and Jonjo Shelvey have proved sound investments. The same praise, unfortunately, cannot be directed at fellow newcomers Alvaro Vasquez, Jordi Amat and Jose Alberto Canas.

The additional strain of competing in the increasingly inconvenient Europa League must not be underestimated. Draining away trips to exotic locations like Ploiești, Romania and Krasnodar, Russia, a reward for achieving success outside the Champions League, continue to be of dubious value.

The manager can, of course, have little excuse for any dearth of confidence in his leadership. A group experiences injuries and losses together, their arrival in a campaign is as definite as that of the yellow ball. What should not be overlooked is an inability to motivate a collection of gifted players into a solid unit. It is the lack of effort, and Laudrup’s apparent failure to induce any, that has brought him to this place. In the end, the stunning victory at Old Trafford in the FA Cup, a competition in which City retain an interest, was meaningless.

As far as history goes, Welsh football is enjoying a deserved renaissance but the irritating madness and meddling at Cardiff City – a new red shirt for the Bluebirds, a work experience kid as chief scout – and Swansea’s current travails have introduced these relative newcomers to the feverish calamities of the top level. They are members of the most exclusive gang there is. It would be a shame to see either one leave.

One thought on “The bottom line at Swansea City”