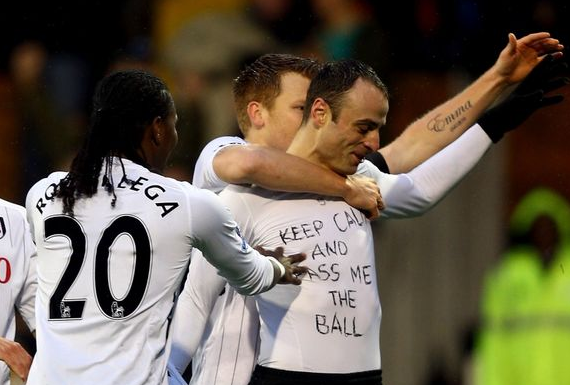 Gliding up through the air just exiting the penalty area, the ball was sent to a certain enigmatic Bulgarian patiently awaiting the header Ryan Shawcross had negotiated away from goal. With a delicious mixture of style and time, the head of Dimitar Berbatov swiftly turned to his right and back again as the ball continued to drop from above, a turn we’d like to believe he made in order to give a sly wink to the pretty girl in the front row at Craven Cottage, who was about to get exactly what she came to see.

With one fluid motion the ball was sent into the top corner without even a sense of effort from Berbatov, dismissing the assumption that this fixture was to be ranked 380th in the imaginary list of the best Premier League games of the season, with neither said truly being able to say they had something to play for. This, it has to be said, could be seen in the other 89 minutes of Dimitar Berbatov’s performance.

It’s a paradox that’s fascinated me ever since I was awakened to his kind of striker, as you say. A languid, frustrating genius capable of equal amounts of brilliance and laziness (could also be surprised as being composed and laid back… kind of) , with the latter often taking a larger proportion, being one option while there was always the more common choice of a hard-working, ‘7 out of 10’ striker a la Bobby Zamora, a man for example would never have a hope of emulating the aforementioned volley, but would have 5 or so scrappy equalisers to compare it with.

So, we know it’s more entertaining for the neutrals for Martin Jol to keep his trust in the big Bulgarian, but for the Fulham supporters, would they be happier with your average Premier League striker, or with the technically superb Dimitar Berbatov?

Ten goals so far in first season give reason to the argument that it may be too hard to say just yet, but I’m not sure if that is necessarily true. Recently enough, Fulham joined the esteemed club of Premier League teams I have seen in the flesh, on a freezing cold afternoon at Craven Cottage right at the end of December. Swansea were visiting from South Wales, and in dreary enough conditions, dominated the Fulham side they were set to overtake in the league table. With Spaniard Michu out with a muscle strain, Danny Graham was handed a final chance by Laudrup to impress before an imminent move away in January. Eager to stay at the club who took a large enough punt at taking him out of the Championship, a powerful, hard-working performance was given as his opener initiated a certain Swansea win.

At the other end of the pitch though, you could see a lonely figure, a million miles away from the pressure Danny Graham was feeling, but also a million miles away from the sensation of putting his side in the lead. Among many of the meagre Fulham counter attacks, to which the home fans bravely attempted to get a bit excited, cries of “C’mon Dimitar!” were met with little mutual enthusiasm.

I am of course speaking of that other Berbatov, the one who doesn’t bother to drift into a game before he can drift out again. I suppose that may come across overly critical of a player who was without a doubt had a successful career, a wildly successful one compared to his squadmates at present. But talking about his 20 goal league season with United unfortunately will not help Fulham progress under Martin Jol.

There is of course the argument that a player such as Berbatov is one that benefits hugely from a strike partner in the form of exactly the kind of player I’ve contrasted him with, a robust solid 8 out of 10 performer. After all, his £30 million move to Manchester United was thought to be an excellent idea in Ferguson’s mind due to how well Berbatov and Wayne Rooney should’ve been able to complement each other. While the England striker would exert himself vigorously for the full 90 minutes, while Berbatov would employ his composed style resulting in the two combing to relentlessly break through defences, or so it would have seemed in Alex Ferguson’s head.

And in fairness, this silent prophecy came true as United triumphed in the league and taking the runners up label in the Champions League in the 2010/11 season, but a clear lack of confidence from Ferguson in Berbatov then on made it obvious his time at Old Trafford was drawing to a close.

Another example of Berbatov working well in a partnership that should be noted was his incredible final 18 months or so playing alongside Robbie Keane at Tottenham, which gave his price tag reason to grow higher and higher.

But the sad truth that will probably put an end to not just Berbatov’s days playing off another striker, but strike partnerships as we know them, is the apparent shift of default tactics in the European game. The age of 4-4-2 is becoming older and limper as the efficience of the 4-2-3-1 dominates the scene, as managers have begun to keep as many attacking talents on the pitch as possible while having numbers in defence, all down to the expulsion of one striker.

The Berbatov we saw winning the Premier League Golden Boot in 2011 or playing gorgeous football in his final days at Spurs, was sadly not just a player in a different time, but it was also a much better player. Every time he passes another penalty into the bottom corner for Fulham, I’ve started to take it with the knowledge that his formerly endless bag of genius is running out. It’s a genius we must appreciate, because it may soon be replaced with a much quicker, robust, average model.