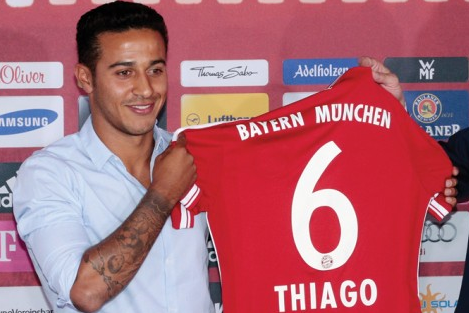 As the glory of the all-German Champions League Final begins to wane and the new season draws closer we look at what to expect from the supreme  sides in the 2013/14 Bundesliga and also if there is any new contender for the German crown.

Firstly, Pep Guardiola’s new look Bayern Munich should be the staggering favourites for every competition under the sun after their historic treble last year. The Champions of Europe have only strengthened in one of Germany’s best young wunderkinds Mario Götze and brightest young Spanish prospects in Thiago Alacantra to add more flair to their robust, pacey and physical side. It seems that with Pep there is a burgeoning desire not only to win (with a devastating counter-attacking system) but to win with flair.  The Bavarian giants have an incredible strength of depth in personnel and arguably the most accomplished manager to take the job apart from the resigning legend Jupp Heyneckes. They are in a brilliant position to repeat the feat however, Munich fans are very much likely to be disappointed as it seems impossible for them to have such sublime form.

For that and other factors I don’t think that the 1/6 odds for them to win the Bundesliga are entirely justified. This is because it’s an entirely new style of coaching for a lot of the players with the tried and tested 4-2-3-1 formation scrapped in favour of the former Barcelona boss’s 4-1-4-1 formation. This new style of play will involve a transition period in which results will not necessarily come their way as easily as they would like. This was evidenced keenly in their hard fought loss against a majestic Dortmund side out for revenge.  In addition to this there will be an immense pressure on Bayern as it’s their title to lose and the Allianz crowd are likely to become restless if the side fail to live up to the hype.

The sheer volume of quality players in the Bayern squad will also lead to discontent due to the reduction of defensive midfield spots to one meaning that one of the eminent Bastian Schweinsteiger or stand out Spaniard Javi Martinez will take to the bench while their plethora of attacking midfielders will be a problem in handling ego’s with Mario Götze, Thiago Alacantra, Toni Kroos, Ribery, Robben, Shaqiri, Müller and possibly an out of position Schweinsteiger all looking to fit into a four strong midfield.  Finally, the unease and anxiety surrounding the president Uli Hoeness’ tax scandal could also translate to the field.

Die Schwarzgelben had begun to usurp Bayern Munich as Germany’s number one club with back to back titles and becoming current Deutscher Pokal holders (German FA Cup). They are the self-acclaimed peoples’ club after nearly going bankrupt in the early 2000’s. They have low ticket prices, the biggest stadium in Germany in the Westfalenstadion, a big emphasis on home grown talents, genius scouts and have a down to earth, often hilarious yet industrious manager in Jurgen Klopp. However, last season they lost their consistency and apart from the meetings between the two sides, which were tight, hard fought affairs as shown in the Champions league final, they were utterly blown away losing by a scintillating margin of 25 points.

To add insult to injury, Mario Götze, Dortmund’s home-grown midfield maestro became “Stern des Südens” latest forty million euro acquisition. This left many to expect that Dortmund would be left miles behind in German football and that the league would turn into a SPL-esque farce with even “Kloppo” stating “I’m afraid we will have a Scottish situation in this league soon”. However, they have signed former golden boy Nuri Sahin back on loan from Real Madrid to plug the gaping hole left by the latest departure and have also strengthened through Shaktar Donetsk’s goal happy Armenian attacking midfielder, Henrikh Mkhitaryan and blistering Gabon forward Pierre Emerick Aumbeyang who became a top notch “Torjäger”-(goal hunter) within Ligue 1. Add this to a settled squad of hard working professionals who love the club and you have a recipe for success. Whether or not Klopp’s high pressuring side can overcome the might of Der FCB remains to be seen over the course of the season but a piece of silver ware seems an increasingly likely proposition after a brilliant pre- season which culminated in the 4-2 victory over Bayern Munich in the Super Cup.

The Bundesliga is nothing if not shocking with six different teams running out winners in the last ten years. Here are the contenders for a surprise tilt at the trophy:

Bayer Leverkusen: Sami Hypia takes sole charge of this team for the first time after co-managing them to third place last term with Sascha Lewandowski. They have a great project and have just signed the South Korean player of the year Heung Son-Min from Hamburg to add to their attacking talent of Stefan Kießling a perennial Bundesliga goal scorer and the defensive merits of Sven Bender. Their main challenge will be filling the hole made by recently departed Andre Schürrle who was their stand out performer for the last couple of years.

Schalke: A strong side who have had a rather mediocre season by their standards but they recovered to scrape fourth place on the very last fixture. They may be a force to be reckoned with next year with off pitch turmoil resolved and a new contract for star player Julian Draxler confirmed, not forgetting the unfailing Klaas Jan Huntelaar who regularly weighs in with his fair share of goals. Finally, Felipe Santana, Dortmund’s hero in the Malaga quarter final has been recruited to steady the defence and halt the flow of goals which they may otherwise be prone to conceding.