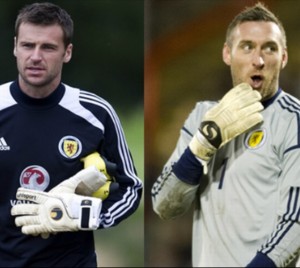 The keeper: the last line of defence. With a hapless player between the sticks conceding goals comes easily, winning games does not. In Scotland something seems to be working its magic on the training pitch, with a succession of keepers receiving great plaudits and having much success.

Jim Leighton; Andy Goram; Craig Gordon. All names which send the Tartan Army dizzy with delight. But why, with the recent failings of the national side as a whole, can the goalkeeper always be relied on with a sense of pride? It is a fact that has been overlooked by the big national media corporations;  when the English bemoan the errors from Joe Hart, Scotland’s keepers continue to provide standout performances.

Having watched – largely through my trembling, tense fingers – yet another botched qualification campaign, I couldn’t help but notice that Alan McGregor was at times the only man on the pitch keeping us in contention. Hull City or Tigers (who knows!) were the English Premiership team willing to give him a chance last Summer. He has, on countless occasions, shown his worth and displayed his undeniable quality for punters and pundits alike since his move from Turkey.

McGregor’s Hull have kept an extremely impressive eight clean sheets in the league this season; that is in no small part down to him. Equally, McGregor’s international deputy, David Marshall of Cardiff, has been the subject of sparkling reviews after a series of high-class appearances for his club, despite their poor form. He even enjoyed a clean sheet in an international friendly in Norway; his first match for his country since 2009.

Highland to lowland, Scottish coaching puts great emphasis on helping goalkeepers reach their full potential. Specialist “goalie training sessions” are offered by many grassroots level clubs. Expert guidance engages kids from a very young age, teaching them the basics of the position before applying more advanced technique to sessions. Maybe this specific and in-depth coaching is key to becoming true masters of a position.

Arguably, based on their form over this season, McGregor and Marshall would be selected as first and second choice keepers over Joe Hart in a hypothetical British XI. The simple errors exhibited by Hart over the last few months have highlighted a key difference between English and Scottish keepers: consistency.

Rarely do you see the Scottish number one rush inexplicably from his line to concede a last minute goal, or in a less extreme example let the ball slip from his reach. These mistakes have shown a mental fragility in Hart that does not appear to be in evidence in McGregor nor Marshall.

One English goalie who has been a consistent performer for his club is Fraser Forster. The towering Geordie lately turned record breaker as he went the most minutes without conceding a goal ever in the Scottish leagues. He is currently playing second fiddle to Joe hart in the England squad, gaining his first cap against Chile last year. But with him only making headlines weekly in Scottish football, it begs the question: is he a diamond in the rough, or simply a big fish in a very small pond?

Whatever the answer is to that question, one thing that is certain is that England have no pretenders to the throne of even second choice keeper. The media liked Ruddy for a spell, Foster for a spell, Robinson for a spell… Same thing in each case. They cannot maintain the same standard of play for any sort of extended period of time.

With England out the picture, it looks as though not many countries in the world can rival Scotland for its goalkeepers. Italy’s Gianluigi Buffon is ageing, as are Iker Casillas and Julio Cesar. All three would appear to have limited time left at the very top of the game. Maybe less so Casillas; still very firmly in favour in his national side, but even his powers are waning. Germany seem to be the only top nation regularly, like Scotland, producing top quality keepers.

Goalkeepers are no longer a problem area for Scotland. An abundance of top quality examples have succeeded Leighton (the first recent great). The current crop will age, but with talent like Cammy Bell and Scott Fox coming through, the future looks bright ahead for Scottish goalkeeping.