The Ligue 1 season is over 50% completed this season, around the point where team and individual success at least for that particular season starts to lose out its novelty act, for both good performances and bad performances.

With the financial restrictions that Ligue teams not named PSG have, more times than not Ligue 1 has gotten the reputation of being a league where the majority of their top players develop and leave at a young age to other European leagues.

In a season where the goal scoring rate in Ligue 1 has increased from last season’s rate, it’s given way for numerous talents to show their work and in certain case, blossom under a much heavier workload.

Let’s take a look at how the ten players have fared so far.

Note: The radars used in this piece were created by Ted Knuston and Sami Hernia.

It’s been fair to say that Divock Origi has had his name in the news a couple of times this season, though it hasn’t really been due to his play.

There’ve been numerous reports of Liverpool trying to recall the Belgian forward from his loan, which would entail paying extra to end the loan deal on top of the transfer fee paid in the summer.

It’s quite interesting to see just how much Liverpool has gone through to try and get him back considering that Origi has been bad this season. 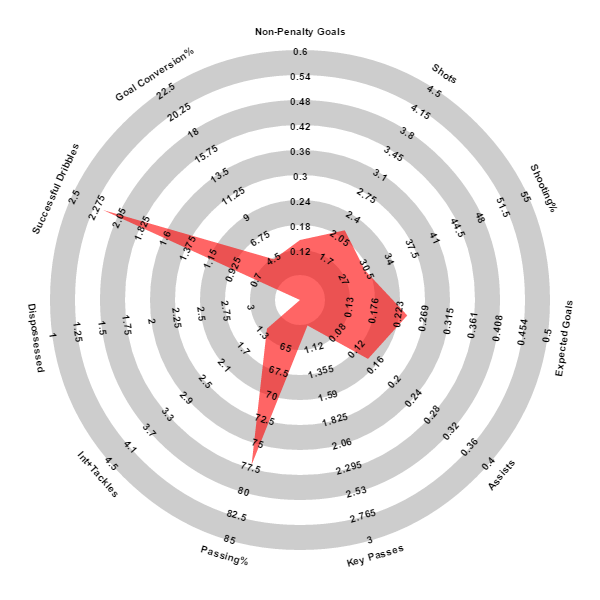 His play has been a microcosm of the problems the club have had. Lille have actually been good at creating chances, ranking in the top 5 in chances created. But they’ve been terrible at their finishing. The club have scored 15 non penalty goals this season but according to their pseudo ExPG data, they should be scoring 21.63 goals.

Other than his dribbling and passing %, there’s nothing in his data this season that’s been good. The saving grace? Origi is only 19 years old, and 19 year old players not named Raheem Sterling shouldn’t be asked to have the type of burden that Origi has had to this season.

The younger brother of Andre. It’s quite funny to think about, but Jordan Ayew is already 23 years old. It seems like just yesterday that Jordan Ayew was an electric spark plug with Marseille.

Now he’s a “grizzled” veteran with a Lorient side that have slowly but surely rebounded from their early scoring problems this season (something I wrote about it a couple of months ago).

Having said that, a lot like Origi, Ayew hasn’t been particularly good this season, but it’s been for different reasons.

With Origi he’s been hesitant in terms of shot data, Ayew has been the opposite. He’s been unafraid to let it fly, but to terribly inefficient results: 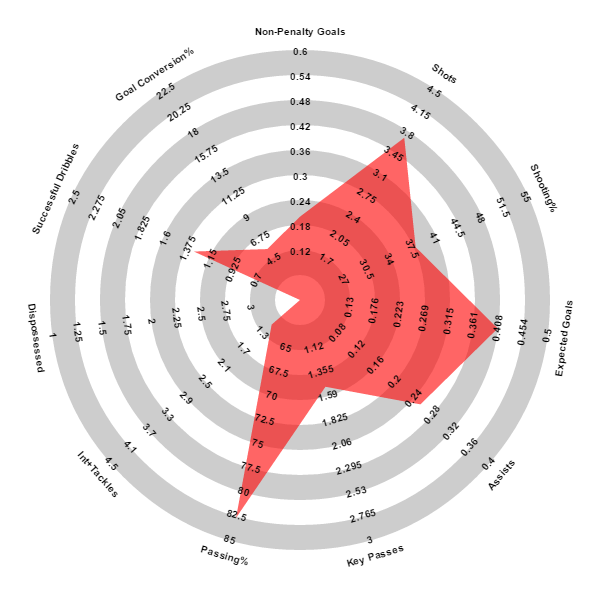 His non penalty goal mark is 0.19 this season, less than half the 0.407 pseudo ExPG data he’s accumulated this season. His goal conversion rate has been poor this season and the similarities with Origi do come with how many times they’re dispossessed with the ball.

For now, Lorient are surviving even with the inefficiencies of Jordan Ayew this season, something we couldn’t say 2-3 months ago.

I decided to lump the two French fullbacks into one because I was fascinated by the results that I got from the two players.

Layvin Kurzawa when healthy has arguably been Monaco’s best player this season (which admittedly isn’t say a whole lot), a creative full back with great attacking potential.

His attacking data has gone up another level from last season’s performance. His episode versus Sweden in the Euro 2015 Under 21’s withstanding, Kurzawa’s growth as a player has been something very pleasant to watch.

If Kurzawa’s growth has been steady, then Jordan Amavi has been a rocket.

In his first season of Ligue 1 action, Amavi has been one of the best full backs in Ligue 1 for a mid table Nice side. In comparison to Kurzawa, Amavi’s data is more towards the defensive side of the ball, though his successful dribbles rate is very comparable.

Jordan Veretout is a funny case study, another player whose seen his play improve substantially in his second season.

He’s been played in the three different central midfield spots (CDM, CM and CAM) and it’s encouraging to see that Nantes manager Michel Der Zakarian is comfortable enough with Veretout to test out his most dynamic midfielder in multiple positions. 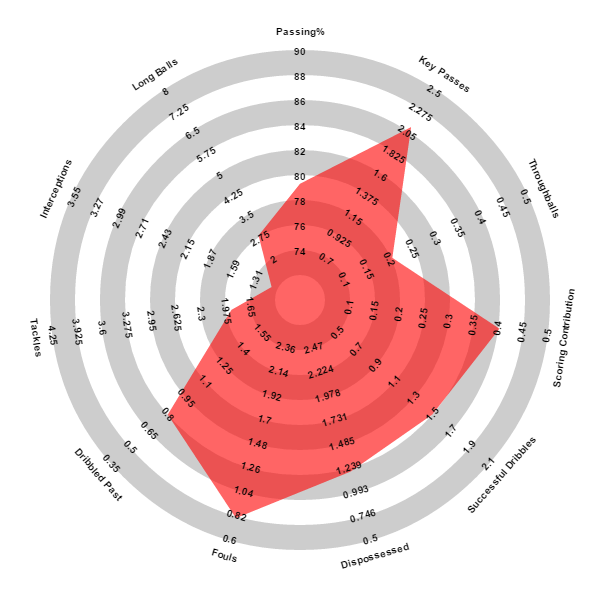 It does seem though that Veretout will ultimately end up as some sort of #10 midfielder. He’s been Nantes’ most creative attacking player, and for a club that’s been hard pressed to find goals, a 0.403 scoring contribution rate is very good at the age of 21 with no definitive position.

For Nantes’ sake, they’ll hopefully get to keep their prized midfielder and have him mature even further.

Monaco in many ways have been a more successful version of Lille this season. Both have been great in shot prevention this season while have been less than prolific attacking wise.

Their attacking players for the most part have been underwhelming this season, particularly their strikers.

One player that’s played close to expectations has been Yannick Ferreira-Carrasco. The Monaco graduate has taken a larger role with the departures of Radamel Falcao, James Rodriguez and Emmanuel Riviere this summer. The results? 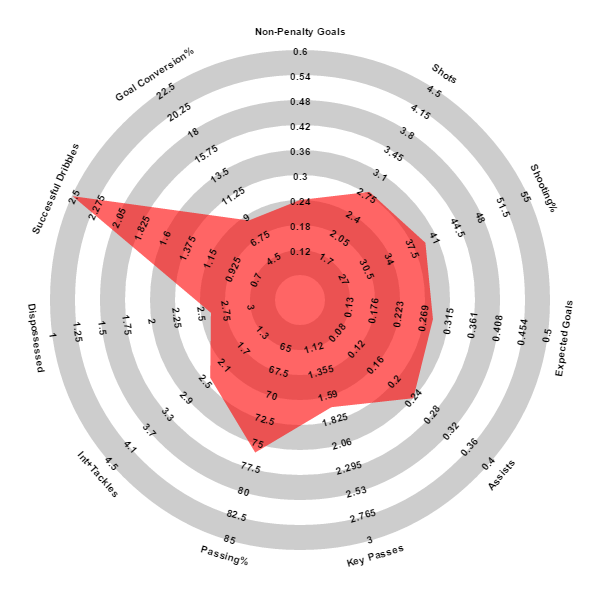 It isn’t the most inspiring of radars if we’re being frank, with his dribbling being the only thing that’s approaching elite status. His NPG rate and ExPG rate are thereabouts around the same, his shot data is pedestrian and his chance creation numbers are nothing special.

But they’re improvements over what happened last season, albeit improvements that aren’t all that significant. His performance versus Bastia this season was his best one yet, an all encompassing performance where you couldn’t go three minutes without noticing an event that Carrasco wasn’t involved in.

It must be nice to be a Lyon player. You’re at the top of the Ligue 1 table, one of your teammates is the most in form striker in Europe (Alexandre Lacazette), and his partner in crime is having a great season in his own right (Nabil Fekir).

In relation to the other people in this list, Maxime Gonalons is a bit more older at the age of 25, which means we’re nearing the absolute peak of his career.

He’s been an absolute workhorse, playing over 6000 league minutes in the last two seasons and he’s on his way to achieving that this season. You want to know an out and out defensive midfielder? 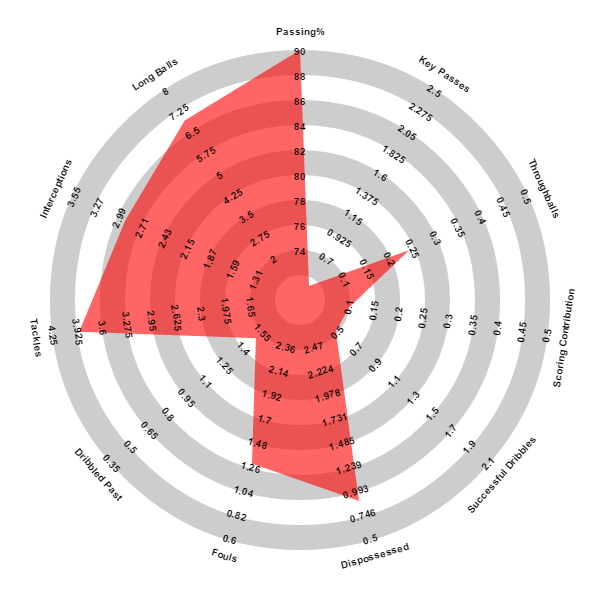 In comparison to Veretout, Gonalons covers the defensive data beautifully. Gonalons for the last couple of seasons has been an underrated defensive midfielder, playing in front of his center backs, sometimes even playing as a CB when the occasion presented himself.

The radar speaks for itself with Gonalons racking up long balls combined with a high accurate passing%.

Lacazette and to a lesser extent Fekir have been getting the attention but Gonalons has been an integral part in Lyon’s revival.

Speaking of Nabil Fekir, he’s been part of the most lethal striker duo in Ligue 1 this season. Eight non penalty goals this season and five assists, which comes to a non penalty goal + assist mark of 0.9 . That’s an insane mark for a player in his first season of moderately heavy minutes. 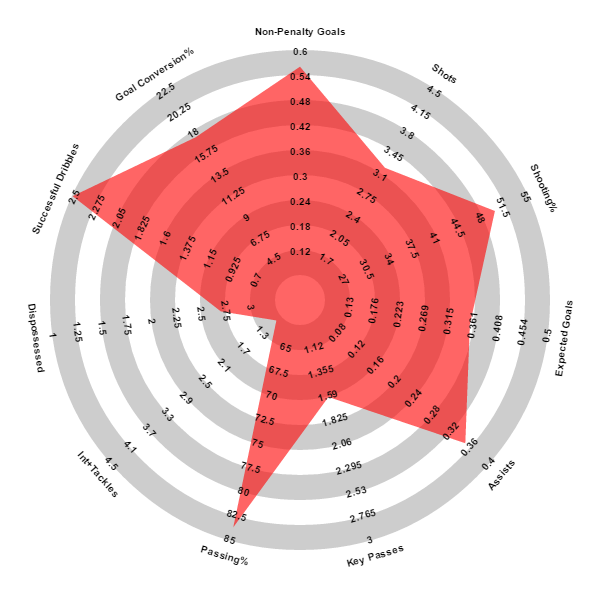 I mean good lord, look at the amount of space covered. 21 year olds shouldn’t be covering that amount of space. Sure we can nitpick here and there: His NPG mark of 0.55 is around ~0.2 above his pseudo ExPG data, which could mean a fair dip in his goal scoring rate next season.

His assist numbers are rather high for someone who’s not contributing  an alarming amount of key passes (and at least in the EPL there’s a much better year to year repeatability for KP compared to assists).

So let’s say we cut 40% of his assists mark and 25% of his non penalty goals to account for some of probable variance in his play. This is how his production would look like: 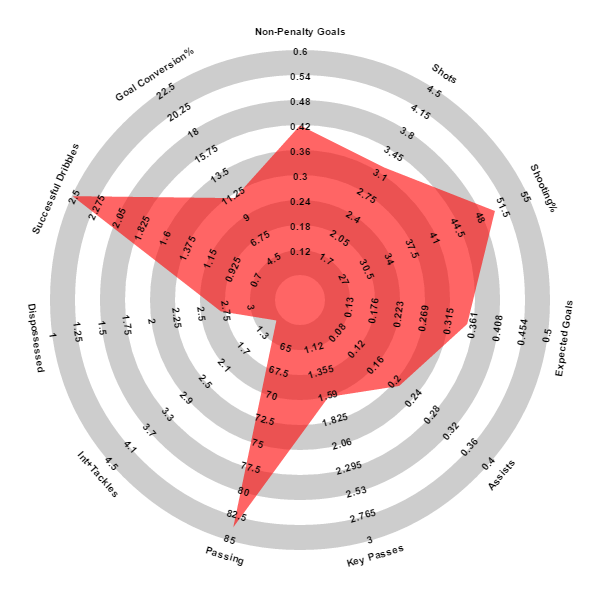 It’s still a really solid output for Fekir but lacking the wow factor that his actual production entails. Regardless, Fekir has arguably been one of the five best attacking talents in Ligue 1 this season though it will be interesting to see how Fekir will fare next season as a second striker if Alexandre Lacazette isn’t with Lyon.

For now, the Olympic Lyonnais academy seems to have unearthed another gem from their system.

I wrote earlier this season about Florian Thauvin’s ongoing bout with being Jekyll/Hyde, even getting to the point of calling him trick or treat Thauvin.

It hasn’t been the strongest of seasons for Thauvin, who was also part of the France Euro Under 21 squad that collapsed against Sweden.

For all the talent that Thauvin has (and he’s very talented), it still seemed like there’s a lot of rough edges in his game. Some in the French media have also been critical of Thauvin’s game.

The same could’ve been said for Ntep as well in the beginning of the season, as he’s been also touted as one of the most promising talents in French football.

However, his play gained steam after the beginning parts of the season, leading to multiple EPL teams scouting Ntep during his matchup versus Monaco on Nov 29. Looking at the radars between the two helps unpeel some more layers between the two:

While Thauvin hasn’t been converting the chances he’s been giving, Ntep has been ruthless in comparison.

However, even saying gives way into lazy analysis. Ntep’s pseudo ExPG numbers are around half of his non penalty goal rate while Thauvin has been underperforming his ExPG numbers.

Everything besides that and Thauvin’s greater shot rate is practically identical between the two strikers.

I didn’t have the same knowledge of data to figure out that Thauvin was having some form of unluckiness in his performance. This graph should tell us part of that unluckiness. 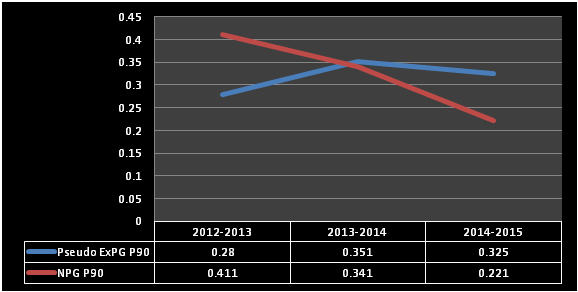 All of this is to say that Thauvin’s numbers this season in terms of his NPG numbers should improve back to somewhere between his first two seasons and his shooting percentages should also see a rebound.

It’s been a really fun Ligue 1 season so far, and there’s tens of more players I could’ve included in this piece. Only 17 more games to go and hopefully the final 17 will be just as exciting as the first 21.