It was a night of firsts at Tallaght Stadium as teenager Sean Boyd’s first goal as a professional sealed the points for Shamrock Rovers in a 3-1 over Bohemians in what was caretaker manager Stephen Bradley’s first league match in charge.

Fans were treated to a hugely entertaining Dublin Derby which took under two minutes to spring into life. Rovers’ Shane Madden attempted to convert a corner in the second minute only to be denied by the diving head of Ismahil Akinade.

Seconds later, Madden went down under a challenge by Dan Byrne which resulted in referee Paul McLaughlin pointing to the penalty spot after a moment of hesitation. 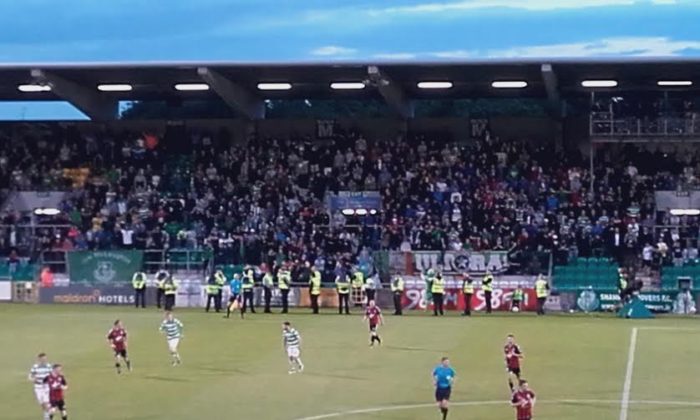 The Rovers fans’ delight was short-lived however as Bohs goalkeeper Dean Delaney managed to knock Brandon Miele’s penalty onto his right hand post thus keeping the score level at 0-0.

The game settled down but the atmosphere remained at fever pitch as the supporters of these two great rivals exchanged taunts while a strong police presence watched closely in order to prevent a repeat of the unsavoury scenes witnessed when the sides last met at Dalymount Park in April.

The game came alive again in the 19th minute when McLaughlin rightly showed a red card to Bohs midfielder Keith Buckley for a studs-up challenge on Gavin Brennan.

Bohs manager Keith Long would have been cursing his luck at having to play the remaining 70 minutes with 10 men but four minutes later he was in dreamland as striker Kurtis Byrne sent the visitors ahead against all odds when he latched onto a long ball from Delaney and lobbed a finish over Rovers keeper Craig Hyland, silencing the home crowd.

However, The Gypsies’ joy was short-lived as it wasn’t long before Hoops fans were in full voice again when Madden ran into the Bohs box and set up 17-year-old league debutant Aaron Dobbs whose shot was saved.

The young man wasn’t deterred however, and regained his composure to fire the loose ball into Dean Clarke who was on hand to sidefoot the ball home.

Rovers now had the bit between their teeth and their extra man was beginning to show.

This was compounded in the 35th minute when Gary Shaw tapped home from a Clarke header after more good work from Madden.

An intense first half ended with Bohs defender Roberto Lopes hitting the crossbar from close range before McLaughlin blew the half-time whistle, giving everyone time to catch their breath.

Both sets of supporters spent the first half riding on emotional rollercoasters of very different kinds.

The opening 45 minutes certainly proved hard to live up to as the second period began at a much slower pace.

Just after the hour mark, Akinade set up Kurtis Byrne for the first chance of the second half but the Bohs striker shot over from close range.

On 65 minutes, Dan Byrne tried his luck with a shot from 25 yards out but his effort was way off target.

This was around the time both managers took efforts to freshen things up. Long brought on Aymen Ben Mohammed to inject some pace for the visitors  and Bradley brought Boyd into the fray to replace fellow teenager Dobbs.

Dobbs would have taken great confidence from the huge applause he was afforded from the home support upon his substitution and even more so when he was later named man of the match.

Boyd, who along with Dobbs signed professional terms with Rovers earlier this week, didn’t have to wait too long to score his first goal in senior football, as he sent the Rovers supporters into further ecstasy with a wonderful finish volley after some neat work between him and Clarke.

If 18-year-old Boyd’s goal showed the maturity of a seasoned striker, perhaps his his inexperience was reflected in his over-enthusiastic celebrations in front of the away support which led to him receiving a yellow card and number of plastic bottles being thrown onto the pitch.

Surely the Rovers fans will forgive him for that though, and stewards and police did well to restore order and the game got back underway.

Delaney was busy again in the Bohs goal as he prevented an own goal from team-mate Dylan Hayes in the 83nd minute.

Ten-man Bohs now appeared to have ran out of ideas as the game petered out against a backdrop of celebratory scenes among the home supporters.

Police in riot gear lined up in front of the Bohs section in anticipation of the final whistle.

Luckily, the game finished without incident off the pitch and on it Bradley will be happy to have achieved such a convincing win over Rovers’ arch-rivals in his first league match in charge.

It appeared to be a dream start for the 32-year-old who, according to FAI rules, can only stay in charge for 60 days as he does not hold a pro-licence coaching qualification.

One thing is for sure, if Dobbs and Boyd can build on their first-team breakthroughs, Rovers fans won’t forget who it was who placed his faith in such untested talent.

While bragging rights are secured until the next league meeting between the sides in October, they will also hope that the latest new dawn over Tallaght won’t prove to be another false one.

For supporters who didn’t get enough of the action on Friday, both Rovers and Bohs take on English opposition in friendlies on Saturday afternoon. Bohs take on Rafa Benitez’s Newcastle United at Dalymount Park at 2.00pm while Rovers host Leeds United in Tallaght at 3.00pm. Tickets available through the club websites or at the venues.