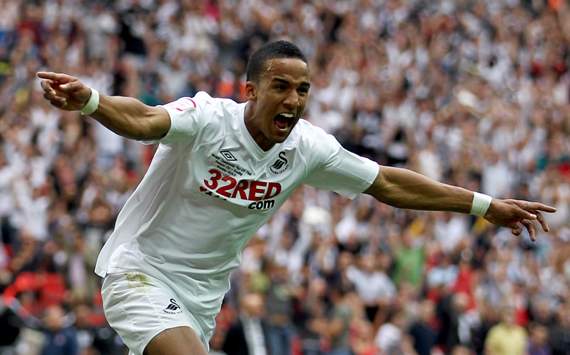 After a rip-roaring debut season in the Premier League, Swansea City have quickly gone from zero to hero in the eyes of many top-flight fans.

Home victories over the likes of Manchester City, Arsenal and Liverpool last campaign saw the Swans’ Liberty Stadium become a fortress, a vocal and at times very intimidating place to visit.

Their slick-passing, Barcelona-esque style of play has certainly attracted the attention of many, but whether Swansea can move onwards and upwards from last year’s impressive mid-table finish is another question entirely, especially considering their recent and quite signifcant loss of players and coaching staff over the summer.

A number of key people involved with the Welsh club have left for pastures new this summer, including manager Brendan Rodgers and his coaching staff as well as midfielder Joe Allen, all of which have left for Liverpool. This could leave the Swans not only weak on the management and coaching front but also in the center of the pitch, where Allen dominated.

The addition of Michael Laudrup as boss, Jonathan De Guzman in midfield and Chico in defence could tip the balance back in Swansea’s favour however, but only time will tell if all three manage to live up to expectations.

The Welsh outfit’s home ground, the Liberty Stadium, is widely regarded as the biggest weapon in Swansea’s arsenal, and is sure to play a huge part in their home performance this campaign. It may only have a maximum capacity of just over 20,000, but the closed-in nature of the newly built ground and the passionate nature of local fans often results in a cultivation of raw noise and a boiling pot-style atmosphere, a combination that quite often acts as the Jack Army’s 12th man.

Michel Vorm, who signed from Eredivisie club Utrecht last summer, is looking set to stay at the south Wales club for next season, despite Swansea receiving much interest from other clubs. The Dutch goalkeeper turned the heads of many last season with a series of huge saves against some of the English game’s most feared behemoths.

A relatively unknown name outside of Dutch football until last season, Vorm provided the Swans with a solid, season-long performance in goal last campaign, which saw the Liberty Stadium outfit stay up with relative ease. You still get the impression that he’s not quite reached his potential either, which is both exciting and rather scary at the same time, as his game is at an exceptional level at the moment.

Orlandi and Nathan Dyer are both looking set for another season in Wales, but the future of striker Scott Sinclair is still very much up in the air, with links to Manchester City becoming ever stronger. The loss of Sinclair to another club could potentially put all of Swansea’s attacking hopes and dreams firmly on the shoulders of frontman Danny Graham, who will be looking to link up with Luke More up front.

Swansea’s pre-season tour of the United States looks to have set the Welsh club in good stead for a tough upcoming season, a campaign that will either cement the Swans’ status as an established Premier League club or doom them to life back in the Championship. Only time will tell, and I for one cannot wait.

The arrival of Chico will complement the Swans’ already comfortable full-back formation, defensive duo Ashley Williams and Angel Rangel have developed a successful partnership in recent times, with both players all looking good ahead of Saturday’s Premier League opener with Queens Park Rangers. It’s unclear whether Chico will break into the defensive formation immediately, or whether his role in the first-team will get gradually stronger over time.

The departure of Joe Allen to the red side of Merseyside has been a very high-profile one. The midfielder has undoubtedly left a rather large hole in Swansea’s center-field formation. The arrival of De Guzman could potentially fill that gap, but after a muted pre-season campaign with the Jacks, his performance doesn’t look set to peak quite yet.

One of the biggest questions being asked of new boss Laudrup ahead of the new top-flight campaign is the style of play he will let his side play. His club are well-known for their easy on the eye, fast-pace game but whether the Dane will decide to continue down that route is another question entirely.