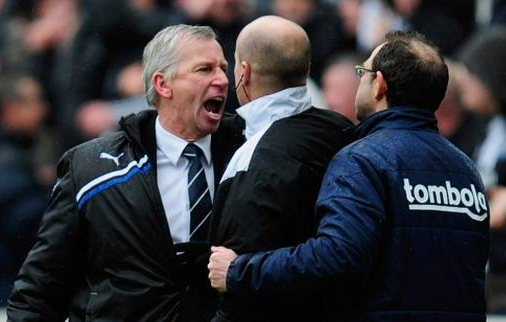 The butterflies are a-fluttering, the nerves a-jangling, and the palms a-sweating.

To a Sunderland fan, it can mean only one thing: *makes joke about Titus Bramble* the Tyne-Wear derby is this weekend.

Vote for your favorite football team on FootballTop.com.

The build-up to this game – at least nationally – has been somewhat subdued, but in the North East the excitement and apprehension have been stewing together in the pan for some time now, and Sunday will see it brought to the boil, drained and served up with a big slice of action and a side of drama.

Neither side are doing particularly well at the moment, though you wouldn’t say either were at panic stations. Newcastle sit 10th, with nine points, Sunderland are 13th, with seven – although with a game in hand. Both sides have a win, a draw and a loss from their last three games.

Neither side are likely to make any drastic changes to their line-ups or formations; Martin O’Neill will probably stick with the 4-2-3-1/4-5-1 system he’s adapted this season, while Alan Pardew will have to decide between 4-3-3, which served him well last season, or the 4-4-2 he’s been using this season.

Tempers flared on and off the pitch last time the two sides met, back in March, with Stephane Sessegnon seeing red during the game, Lee Cattermole AFTER the game and Alan Pardew was sent to the stands for behaviour he himself has admitted was unacceptable.

For both teams, finishing with 11 men on the pitch – and their respective managers on the touchline – will be an important factor, although without it detracting from the added passion that comes with these games.

Cattermole is suspended for this game (not a good thing, in my opinion), and O’Neill’s biggest selection headache will be who partners Jack Colback in the centre of midfield. Seb Larsson has played there for a large amount of this season, without ever looking really comfortable; David’s Vaughan and Meyler haven’t had a huge amount of game time; Craig Gardner has been playing at right back.

It’s likely to be a key decision, especially as they’ll be up against Cheick Tiote and Yohan Cabaye, and this area will doubtless have a huge influence on the outcome of the match. Pardew, meanwhile, will be wondering how he can get the best out of both Demba Ba and Papiss Cisse, something he hasn’t fully been able to do since the latter arrived on Tyneside.

Ba has been the in-form half of the Senegalese duo this season, and if Cisse’s struggles continue then the onus will be on him to provide the main goal threat. Likewise, Steven Fletcher has all but carried the Sunderland attack.

Two maverick players, capable of astounding and annoying in equal measure. On their day, a joy to watch: both are capable of producing moments of magic. Neither, however, has performed at their best this season; Sessegnon in particular has looked off the pace. If either of them ‘turn up’ on Sunday, or likewise fail to, then it could have a huge impact on the performance of their side and the overall result.