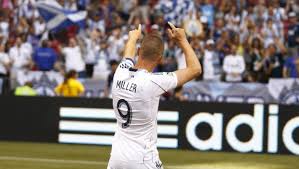 While most of the offseason focus in Canada was on Toronto FC after their acquisition of big name signings Jermain Defoe, Michael Bradley and Julio Cesar, the Vancouver Whitecaps flew somewhat under the radar as they went about their business under rookie coach Carl Robinson.

It’s no secret that Robinson wasn’t top of the Caps’ wish list for the top job but the former Wolverhampton Wanderers, Sunderland and Wales midfielder was a sensible appointment given he knows the organisation after serving as an assistant to previous coach Martin Rennie.

Robinson has embraced the challenge of getting the club into the MLS playoffs after they missed out by three points in 2013.

On Saturday evening in the season opener, his new-look side took on last year’s Supporters’ Shield winners, the New York Red Bulls, in front of 21,000 spectators at BC Place and cruised to a superb 4-1 victory. Kenny Miller helped himself to a brace and new signing Sebastian Fernandez scored with a stunning effort from outside the area.

“It’s important that they [the players] start off on the right foot,” said Robinson after the game.

“We did well today, we got our reward, but it’s the first game. There’s still 33 games to go.”

Even at this early stage, the signs are encouraging. Vancouver had less possession (42.4%-57.6%) and completed more than 100 less passes (355-479) than the Red Bulls but the clinical nature with which they put their opponents to the sword is no doubt especially pleasing.

It hasn’t all been smooth sailing for Robinson though, and the offseason started badly as the Caps lost last season’s MLS top scorer Camillo Sanvezzo to Querétaro in Liga MX after an unsavoury saga that seemed to go on forever.

Replacing a man who netted 22 goals in 32 games was never going to be easy but Robinson made it a priority to bring in a number of talented individuals, particularly in midfield where the team suffered badly in 2013.

Two Uruguayans, Fernandez and Nicolas Mezquida, were impressive on debut, while Argentine Matias Laba adds some steel in front of the back four having joined from Toronto FC.

Chilean playmaker and new Designated Player Pedro Morales came off the bench against the Red Bulls and immediately showed flashes of the quality, including a neat finish for the fourth goal, which has seen him score three times in 11 appearances for the national side.

At the back, skipper Jay DeMerit appears to be fighting fit after paying just eight times last season due to a ruptured Achilles tendon, and his pairing with fellow veteran Andy O’Brien adds vital experience to the team.

In Camillo’s absence, Darren Mattocks looks likely to partner Kenny Miller up front, and the 24-year-old will be looking to return to his 2012 form when he scored nine times in what his debut campaign.

With competition for places right through the squad, the players know that they will have to play to the best of their ability to get a starting spot.

“You can’t take anything for granted,” says Miller. “You have to go out and keep performing, and not just in games but in the training.

“You have to train the way you play, and if you slack off a little bit, there’s guys there on the subs bench and in the stands that are waiting to take your jersey.

“It’s great. It’s healthy for the guys and I’m sure the boss will love it, even though it will give him headaches throughout the season.”

The Whitecaps travel to Chivas USA, who themselves recorded an impressive opening day win over the Chicago Fire, on Sunday and the game presents a great opportunity for both sides to record back-to-back wins to start the new season.