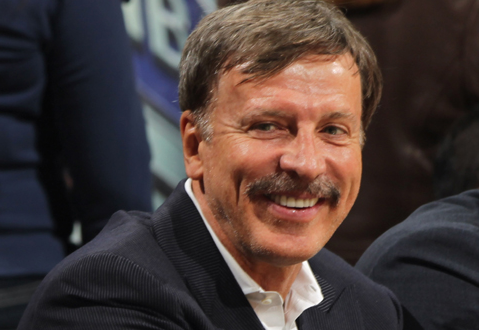 American businessman Stan Kroenke has increased his shareholding in Arsenal to more than 62 percent and has now agreed to make an offer for the rest of the club and to Alisher Usmanov who owns just over 26 percent of the club.

A full takeover of the club was triggered after Kroenke Sports Enterprises acquired the stakes of Danny Fiszman (16.1%) and Lady Nina Bracewell-Smith (15.9%) forcing him over the 30 percent threshold which forced a complete buyout of the club.

Both shareholders, Fiszman and Bracewell-Smith, had made it known over the past year that they were willing to sell their stake in the club. Bracewell-Smith actually went down the unprecedented route of hiring a U.S. financial services company, Blackstone, with a view to finding a buyer for her stake. It is believed that she was looking for somewhere in the region of £15,000 per share.

While Danny Fiszman is said to have wanted to part company with the club and his shares after his health deteriorated over the last 12 months.

The terms of KSE’s offer for the club having been agreed with the Fiszman and Bracewell-Smith are £11,750 per share and as such the club is now valued at around £730m, or almost £900m if you include the current debt burden of £147m on the club too.

Last year he became the majority shareholder with the St. Louis Rams but he has had a major say in the running of the franchise since 1995 when he bought 40% of the team. Since that time they have won one Superbowl, that came in the year 2000.

That very same year Kroenke became the owner of not one but two major franchises when he bought into the NBA and the NHL with the Denver Nuggets and the Colorado Avalanche respectively.

The Avalanche then won the Stanley Cup in 2001 and have reached the post season in seven of the last ten years. While the Nuggets have not won anything since becoming involved with KSE but are one of only three teams to reach the playoffs every season for the past eight years.

The Colorado Rapids are the defending MLS Champions.

“We are excited about the opportunity to increase our involvement with and commitment to Arsenal. Arsenal are a fantastic club with a special history and tradition and a wonderful manager in Arsene Wenger.

“We intend to build on this rich heritage and take the club to new success. I am delighted that Peter Hill-Wood has agreed to support us by continuing as chairman.

“We especially wish to acknowledge and thank the board, Danny Fiszman and the Fiszman family as well as Lady Nina Bracewell-Smith and her family for the confidence they have had in me over the past years and in allowing us to move forward in this more prominent role.”

In agreeing in principal to buy out Fiszman’s and Bracewell-Smith’s shares, Kroenke has in effect isolated Alisher Usmanov. The Uzbek businessman is said to be furious with this move.

For the last year there has been something of a standoff as far as the shareholders in Arsenal are concerned. Both Kroenke and Usmanov have increased their stake in the club by percentage points but both have fallen short of breaching the 30% which under Takeover Panel rules would force a buyout of the club.

This latest move by Kroenke may have been sparked by the current economic crisis in Ireland. When building the Emirates Stadium, Arsenal Holdings took loans out with Bank of Ireland to the value of £150 million.

In May 2009,  Arsenal agreed to a “rights issue” with the Irish bank. This basically gave BoI shares in the club.

Recently, the new Irish government in conjunction with the EU and the IMF forced every bank in the country to undergo a “stress test.” The findings were frightening to say the least and the end result was another €26 billion being put into the banks, by the Irish tax-payer, to keep them afloat.

Bank of Ireland now find themselves in the position of having to raise €4.2 billion before the next test to avoid being nationalised.

Given that these shares could have become available for anyone to buy it is understandable that Kroenke moved so quickly to usurp Usmanov.

According to Robert Peston, BBC Business News Editor, Usmanov is said to be considering his options.

“I’ve been talking to a colleague of Alisher Usmanov’s,” he said. “I was told he is absolutely hopping mad. He feels that, in the words of his colleague, has been stitched up by Arsenal. He is thinking of is whether or not there is any way he can make a counter offer. That has got to be fairly unlikely simply because it is unlikely they [Fiszman and Smith] would be able to reconsider their decisions to sell to Stan Kroenke.”

The question that almost every Arsenal fan is asking now is; “Will this be a leveraged buy out?”

It is too early to say, but the vast majority of Kroenke’s £1.77 billion fortune is tied up in real estate and as such is not what you would call cash on demand. So it will be interesting to see how KSE decide to finance the buy-out and how they then decide to run the club that is heralded as one of the best run in the world.

Deutsche-Bank are the financial advisor to Stan Kroenke and are very happy that KSE will be able to pay the £394 million in cash if the remaining Arsenal shareholders refuse to take up a loan option with the American businessman.

Before the takeover can be ratified KSE must provide the English Premier League with their financial plans for the next 12 months but this is seen as little more than a formality.

The one person that most Arsenal fans wanted to hear was Arsene Wenger. The Frenchman is widely respected across the game and is worshipped by the vast majority of Gunners’ fans, although there does seem to be growing disenchantment in the manager with the club having not won a trophy for the last six years.

Wenger said: “I have worked with Stan Kroenke at board meetings over the past couple of years and I believe he has the best interests of Arsenal at heart.

“He understands the club’s heritage and traditions and our ambition to run the club in a way which protects our long-term future.”

There can be little doubt that Arsenal are moving into a new era with Stan Kroenke at the helm. Will it be a Glazer type ride?

Only time will tell.