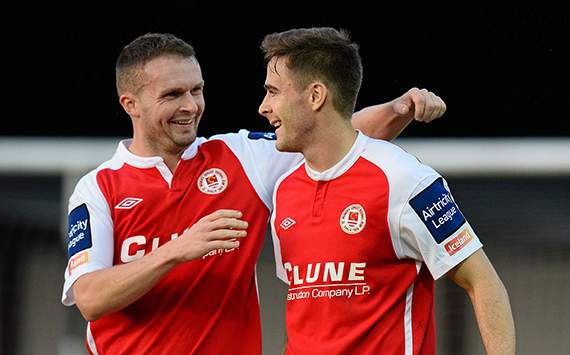 St. Patrick’s Athletic have been crowned League of Ireland champions for the first time in 14 years thanks to a 2-0 win over outgoing champions Sligo Rovers at Richmond Park.

A fantastic first half goal from man-of-the-match Greg Bolger and a tap in from Anto Flood following an excellent flowing move at the end of the opening half did for the home side who moved eight points clear at the top of the table with just two games to play.

With President Michael D Higgins and Republic of Ireland interim manager Noel King in attendance, the visitors threatened to spoil the party atmosphere, as they were on top early on.

Sligo had the majority of the early play and chances with Brendan Clarke doing well to save a deflected Alan Keane strike and Evan McMillan should then have done better than head straight into Clarke’s arms with a free header from Aaron Greene’s diagonal ball.

A thunderbolt which fizzed into the top corner from Bolger on 33 minutes from 25 yards out settled home nerves however.

Then, three minutes before the break, a flowing move down the right flank and a good ball across the box from John Russell found Anto Flood and he had the simplest of tasks in tapping home from five yards out.

In a less exciting second half, Sligo almost got back into it 15 minutes from time but Clarke did well to save, first from Keane and then got to his feet quickly to save again from David Cawley’s follow up.

Sligo came as close as they would come five minutes from time when that man again Bolger somehow managed to hook a goal bound ball clear from under his own crossbar after Clarke had totally misjudged a ball into his box and instead punched it towards his own goal. It was relatively plain sailing thereafter, as Pat’s sealed their victory and a first league title in 14 years.

Having scored the most goals (53) and in conceding the fewest (just 15) the “Super Saints” are deserved Airtricity League Premier Division champions for 2013 and now it’s time for the Inchicore faithful to party like it’s 1999.