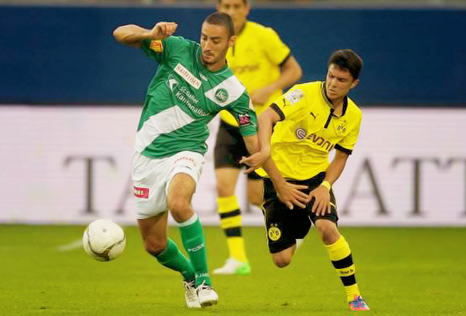 It has been an outstanding start for FC St Gallen – the oldest still existing club in Swiss football – who have embarked on this current league campaign with overwhelming confidence. The Swiss Super League team has surprised many just 16 match days into the season.

The club, managed by Jeff Saibene, operate second position in the Swiss top-flight, next to a very healthy-looking 32 points, which sees them lie ahead of domestic heavyweights Sion, Basel – the reigning champions, Young Boys and Zurich.

From the 15 July to the 01 October – their first 10 league games of the season – they went unbeaten until losing to current table toppers Grasshopper 1-0.

Formerly a run-of-the-mill side, frequently looming in mid-table mediocrity and indeed at times suffering relegation, St Gallen have made a steady transition from yo-yo club to top-four contenders. Such is the progress that has been displayed; Saibene’s men are on the up.

Saibene has got them playing some captivating football. The style is bearing fruit as only Grasshopper – who have 27 league titles to their name – stand in the team’s way of topping the table.

With nine victories, five draws and just two defeats to date – St Gallen look razor sharp heading into the festive period. If the team can sustain its impressive form and maintain its winning mentality until the end of the season then you never know – a shock spot in the Champions League qualifying could be in order.

It helps the club is run well, under the assured and watchful eye of chairman Michael Huppi, and the squad is strong and gifted.

Ezequiel Scarione, the club’s prolific talisman who is the Swiss Super League’s second-top goalscorer at the time of writing with seven strikes, is lethal in front of goal. The former Boca Juniors attacker has played a part in every one of St Gallen’s domestic matches so far this season.

Meanwhile, Swiss defender Philippe Montandon is an orthodox but effective leader in the defence. His methodical approach has helped the backline concede just 11 times this term. Impressive.

But the whole squad, in truth, has been playing out of their skin. Under Saibene, the club is thriving on a style equipped with panache and gaudiness.

It’s early days yet but courtesy of their terrific form and playing style – St Gallen could well be the new poster club for Swiss football. Those dark days of scrapping for survival look all but over: for now St Gallen chase their first Swiss Super League championship since 1999.