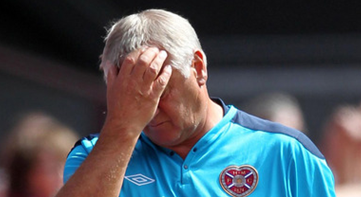 This wrap up was going to concentrate on last weekend’s SPL action. I’ll still take you through a quick review of the matches but they rather pale into insignificance by events that took place at Tynecastle yesterday, when everyone’s favourite Lithuanian (except Sean Connery as Captain Ramius in Hunt for Red October) struck again.

At around 3pm yesterday, and totally out of the blue, Hearts supremo Vladimir Romanov decided to relieve manager Jim Jefferies and his assistant Billy Brown of their duties at the club, two days before a vital European home tie against Paksi. The announcement has stunned fans and pundits alike but we should never be too surprised when it comes to Romanov and Hearts. The sacking of Jefferies represents the ninth manager who has fallen foul of Romanov’s ire and it is just the latest in a long line of unpredictable behaviour from Romanov and follows on from the article i did for BP football a few weeks ago regarding his issues with the ‘mafia’.

Why did Romanov sack Jefferies? To be honest your guess is as good as mine but here are a few facts.

The club finished third in the SPL last season although at one point in December they could have went top of the table but they took a beating from Celtic in Glasgow. That defeat seemed to have knocked the wind out of the club and they limped home in the second half of the season winning only one game between February and the end of the season. In fact there was a rumour towards the end of last season that Jefferies had in fact quit the club regarding Romanov’s interference in team selection. The Lithuanian elected to make club captain Marius Zaliukas unavailable to Jefferies for a visit to Rangers on the morning of the game as he was concerned that his fellow Lithuanian might be sent off by the referee.

However those problems seemed to be behind Jefferies and Romanov as they dealt with the Craig Thomson saga together and the Lithuanian provided funds for Jefferies to bring in a number of top performers from other SPL sides such as John Sutton, Mehdi Taouil, Danny Grainger and Jamie Hammil.

The club started the season with an impressive draw at Ibrox and followed this up with an equally impressive result away to Paksi in the Europa League. A disappointing defeat to Dundee Utd at home on Saturday was the clubs first defeat of the season.

So all in all a mixed back over the last few months but nothing apparent in warranting the sacking of Jefferies, not even the disappointing run in the second half of the season.

So if the facts don’t exhibit any justification then perhaps indulging in a little speculation will.  I must stress this is my own opinion but i think the sale of Lee Wallace to Rangers may have something to do with it. Just before the start of the season Hearts sold their best player Wallace to Rangers for £1.5m. The Glasgow club had been sniffing around Wallace for a while and this was not their opeing bid for the player Now i am speculating here but perhaps something has happened behind the scenes regarding this transfer. Perhaps Jefferies has been furious at the sale of the clubs best player to a rival club and all that has followed is the total breakdown of the relationship between manager and chairman.

In the end we may may never know the truth behind Romanov’s decision. What we do know is that the new manager will be former Sporting Lisbon manager Paulo Sergio, who will be unveiled as manager today. The fact that Sergio was already lined up suggests that Jefferies days had been numbered for a while, perhaps as far back as last season.  We await the press conference with interest today.

Now to matters on the pitch. Saturday’s early kick off saw the so far unconvincing Rangers travel to Perth to face St Johnstone. The Ibrox side, featuring new signing Dorin Goian in defence,  saw off an early challenge from St Johnstone to win 2-0 with goals from Steven Naismith and Nikica Jelavic. The win was McCoist’s first as Rangers manager. In truth though the champions still look a couple of players short particularly in terms of midfield creativity. To be blunt you aren’t going to create much with Edu and McCulloch in centre midfield. As for St Johnstone they have a decent squad and will be defensively sound again but they need to get a striker in to score goals, which was their problem last season too.

A minor miracle occurred in Inverness as Hibs not only scored but won in the Highlands. Prodigal son Garry O’ Connor netted in the 90th minute to give the Edinburgh side a 1-0 victory. The game itself had plenty of goal scoring opportunities for both sides with Inverness hitting the post and having a goal ruled out for offside and Hibs going close with a couple of  long range efforts. However a mistake from Inverness keeper Ryan Esson gave former Scotland striker O’Connor to net the winner which he did with aplomb.

Down the road at Paisley St Mirren defeated Aberdeen 1-0 thanks to  a goal from Nigel Hasselbaink. In truth St Mirren should have won by more as the aforementioned Hasselbaink missed an almost open goal while several of his team mates were equally profligate in front of goal. The Dons who performed well in their opening match last week were shockingly bad and it must worry manager Craig Brown that his side can be so bad if they are missing a couple of players. Its also apparent that Aberdeen desperately need some creativity now that Chris Maguire and Sone Aluko have left the club.

At Rugby Park, Kilmarnock and Motherwell played out an entertaining scoreless draw with stand out performances from Killie’s James Dayton and ‘Well keeper Darren Randolph. Both sides have looked good so far this season despite losing top players over the summer months and created a number of chances with Dayton and Fowler going close for the home side while a long range effort from Steve Jennings had Cammie Bell in the Killie goal scrambling. The best chance of the match fell to Kilmarnock though after Kelly missed an open goal after an error from Randolph in the Motherwell goal. However both sides will be happy with the draw and remain unbeaten so far.

As said earlier Hearts went down at home to Dundee Utd in the Sunday afternoon game. A header from Utd striker John Daly was enough to take the points back to Tayside. Again, it was an entertaining affair with plenty of chances forcing keepers Pernis and Kello to earn their corn. David Goodwillie was not selected for Utd due to his impending move away from the club but others stepped up to the plate for Utd as John Rankin crashed a shot against the bar early on. Hearts hit back with Calum Elliot missing a couple of chances he should have done better with.  The goal eventually came from a corner as Daly rose to head home form 12 yards. Hearts went close to equalising late on through Templeton and Stevenson but Jim Jefferies last match in charge of Hearts ended in defeat.