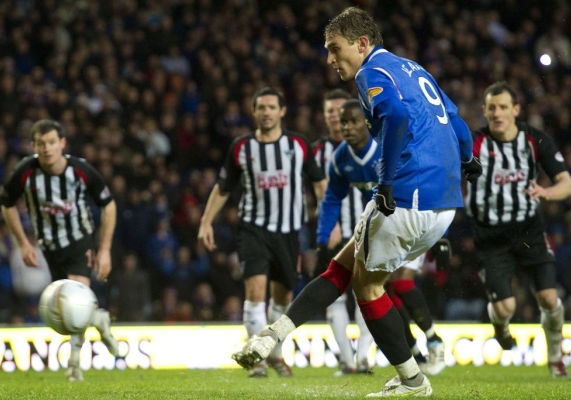 Only last month there was talk of book makers closing up shop on Rangers winning the SPL title. A mammoth 12 point ahead at the end of October, Rangers had yet to concede a goal on their travels and were about to break a long standing record for away victroies. By contrast Celtic were all over the shop. A 2-0 defeat to Hearts was followed by a 3-3 draw at Kilmarnock, a game in which the Hoops were 3-0 down, and a 0-0 draw with Hibernian at Celtic Park. Neil Lennon was under the cosh big time.

But a month, as McCoist and Lennon will testify to, is an eternity in football especially in the gold fish bowl of Glasgow. Now, as we head into December, Celtic have slashed Rangers lead at the top to 4 points, won four SPL games on the bounce and qualified from the Europa League Group stage to face Atletico Madrid.

As much as Celtic seem to have upped their game somewhat in the last few weeks, Rangers seem to have tumbled off the golden path to the same degree. The abject defeat on Sunday to Kilmarnock was preceded with an equally shoddy 0-0 home draw against St Johnstone. The champs are someway from their best.

It is no coincidence that this mini slump has coincided with the loss of Steven Naismith to injury. Naismith provides not only the energy and drive from midfield but also his fair share of goals. Without Naisy in the team, the Rangers midfield looks very pedestrian. Ask any Rangers fan, when the team line ups are read out prior to kick off and Lee McCulloch and Maurice Edu are both named, you know you’re not getting much bang for you buck.

Motherwell are still sticking in at the top…..just about. They are currently 5 points behind Celtic and are clearly the best of the rest. A hugely respectable third place finish is their’s for the taking but it seems unlikely they have enough in them to mount an unlikely title challenge.

St Johnstone meanwhile continue to excel under new manager Steve Lomas. Last week’s 0-0 draw at Ibrox was followed by a resounding 3-1 home win against Hibernian who also had a new manager in the dugout, former Bohemians boss Pat Fenlon.

There was much concern in Perth when the hugely influential Derek McInnes left to take the hot seat at Bristol City last month. However Lomas appears to have addressed those concerns at least in the short term with two good results and performances to boot.

Hearts continued their see saw form indicative of their season so far with a 2-1 home win against bottom club Inverness. It took at late goal from Eggert Jonson to give them the points and see them leap frog St Mirren into fifth place. However of more concern to the Gorgie faithful is the financial status of the club with owner Vladimir Romanov looking to sell up, players being played late and a promise of a squad clear out in the not to distant future.

One thought on “SPL Update”