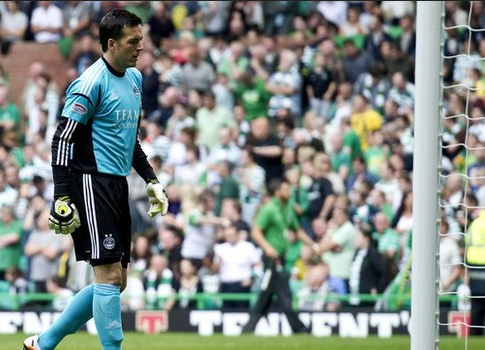 The Champions squeeze past The Dons and there were wins for The Tangerines and The Jam Tarts whilst the new boys remain undefeated.

Jamie Langfield goes by the nickname “Clangers” due to his occasional lapses in concentration which can often give the opposition the most fortunate of advantages. He showed just why this name has stuck with him on Saturday lunchtime. A howler just 9 minutes from time allowed Kris Commons’ weak shot slip past him and with it cost Aberdeen the chance of an opening day point at Parkhead. The champions unveiled their league championship flag before kick off but it was almost a case of after-the-lord-mayor’s-show as they failed to break down a resolute Aberdeen side which has had a major reshuffle this summer. Their well-organised side deserved at least a point from the game, mainly due to the performances of Gavin Rae, Russell Anderson and Ryan Jack. However, it wasn’t to be their day as the biggest favourites for a league title anywhere in the world this year started with a win; don’t expect this to be their only success in the coming months

The Scottish Cup holders began their league campaign with a dominant win over the first Scottish side to exit Europe this season. New Hearts manager John McGlynn would have enjoyed his debut in the Hearts dugout as his side got a deserved 3 points thanks to goals from John Sutton and David Templeton.  The Edinburgh side dominated the match with 18 attempts on the Saints’ goal and the only disappointment for McGlynn and the home side’s fans would be that they didn’t score more on a gloriously sunny day in the capital. Sutton’s goal came from the penalty spot after Templeton beat almost half of the Perthshire side’s team before being hauled down by their captain Dave MacKay. Sutton scored with confidence and it brought his first competitive goal since returning to the club from a loan spell at Central Coast Mariners. The outstanding Templeton sealed the points with a curling shot eight minutes from time. For the SPL to be a success this season you feel a team will have to push Celtic hard at the top for a sustained period of time. Perhaps Hearts are the best equipped to do just that.

The club which was known for so long this summer as “Club 12” started their season with a well earned point at Rugby Park. Dundee were only formally accepted into the SPL the day before the match when Rangers’ share was finally transferred over to the club. They were determined not to start with a whimper and would be pleased with a point come the end of a game that the home side largely dominated. The hero for Dundee was goalkeeper Rab Douglas who played an excellent game between the sticks, stopping Kilmarnock taking the lead on a number of occasions. At the other end it was Ian Davidson that has the best chance to send the Dundee fans home with all three points. Perhaps that would have been a fitting result as Dundee took over 3,000 fans to Rugby Park – almost the same amount as turned out for Killie. Perhaps this shows that the Armageddon outcome painted by messrs Regan and Doncaster is not a distant thought.

If you went down the bookies on Saturday morning I’m sure you wouldn’t have found many people predicting that this game would have produced the most goals on the opening weekend of Scotland’s top division. It did take a dramatic injury time equaliser from Darren McGregor to give this game that honour after an entertaining affair in Paisley. It was a debut to remember (and then forget) for former Newcastle striker Lewis Guy though. He scored an early opener for St Mirren which gave the home side the lead at the break. His day, however, would end with a red card for violent conduct following McGregor’s equaliser for his side. Inverness got back in the match with goals from Nick Ross and Billy McKay and thought they would have done enough for all three points before the late drama ensued.

The dullest game of the weekend came at Dingwall where a crowd of 4,824 supporters turned up to see the home side in the SPL for the first time. You may think less than 5,000 for a match in Scotland’s top flight is rather poor but when you consider the town has a population of only 5,000 then perhaps it is not so bad after all! The two goalkeepers involved had a rather quiet day in the sunshine as chances for either side were few and far between – if they had laid their towel’s out on the goal line they would have caught more sun rays than they would footballs. The best chance fell to the away side but Michael Higdon could not direct his header into the back of the net. Both sides will be pleased to start the campaign with some points but will need to improve if they are to get their first successes.

The performance of the weekend was saved until the final game as the orange side of Dundee produced a sparkling display against a limp Hibs side that will need to improve hugely on this showing to avoid a repeat of last season’s struggle against relegation. Hibs’ summer had been based on rebuilding under Pat Fenlon – 9 players have gone with 6 new faces brought in – but after this match you feel that the building process needs to continue right up to the deadline of the transfer window. United on the other hand were rampant and should really have won by an even more convincing margin. Johnny Russell took just three minutes to score the first of his season after Hibs showed yet another side to their shaky defensive unit. Jon Daly grabbed his side’s second goal after a mis-hit from Gary Mackay-Steven landed on the striker’s head. Mackay-Steven was the deserved winner of the man of the match award after an awesome performance from start to his finish in the 80th minute. After his substitution, Utd added a third through Michael Gardyne, who broke clear of the Hibs defence and slotted the ball past debutant Ben Williams. Hibs’ final game of last season was the thumping loss to rivals Hearts in the Scottish Cup final. Those two will play each other again next weekend and, after this showing, few would expect anything other than a similar scoreline. But after the summer that has just gone in Scottish football – anything is possible!