With five or six games left in the Ligue 1 season, there are multiple races still left to be decided. Of course there’s the exhilarating title race between the big spending outfits Paris Saint-Germain and the home grown talent from Olympique Lyonnais.

Of course those aren’t the only races in Ligue 1. The dreaded relegation fight is alive and well in Ligue 1 this year. Only 11 points separate ninth place Rennes from eighteenth place Lorient.

After the triumphs of last season where Christian Gourcuff led Lorient to a top ten finish, this season has been anything but pleasant. I wrote a post for the esteemed French Football Weekly concerning Lorient.

One thing in particular was the lack of scoring with the departure of Vincent Aboubakar:

The lack of attacking play can again be mostly laid at the feet of Vincent Aboubakar’s absence. In addition to his goal scoring prowess, he also was a very solid creator for others with his six assists last season.

The midfield has failed to create as many chances this term, with both the number of key passes and chance creation down statistically. But even with the chances that are being served up, Ayew and the rest of the forwards haven’t been able to apply the finishing touch.

Ayew in particular is a curious case as he’s never quite yet lived up to the hype so far despite flashes here and there, particularly with his loan spell at Sochaux last season. He’s still only 23-years-old and football has numerous examples of young players finding their footing in the latter stages of their youth.

The post was written on November 7th, when Lorient were dead last in Ligue 1. Fast forward to present day and the news isn’t much more pleasant.

As it stands now, Lorient are eighteenth place in Ligue 1 and are in real danger of dropping from the first division, something that hasn’t happened since they were relegated at the end of the 2001-02 season.

Since Lorient’s return to Ligue 1 in 2006, they’ve fluctuated between lower and upper mid table, with their seventh place finish in 2009-10 remaining the best finishing place they’ve ever had in Ligue 1.

That 09-10 squad featured a young Kevin Gameiro who scored 17 goals that season and Laurent Koscielny.

This current iteration of Lorient is a far cry from that squad or even last year’s squad when they finished eighth place. It’s been a real struggle for Lorient this year.

Their defense has been pretty poor, which wasn’t a particular strength last year and has been exposed even more with the departure of Bruno Ecuele Manga last summer.

Lorient have conceded the seventh most goals in Ligue 1 this season and have the fourth worst defense when it comes to expected goals at 38.3.

What’s more shocking has been the complete absence in the goal scoring department. Lorient have only scored 34 goals this season despite ranking third in shot attempts, fourth in shots on target and fourth in expected goals.

It’s stunning that a team that does well both in creating shots and creating quality shots can do badly in goal scoring, yet here we are with this Lorient side.

So what’s caused this drought of goal scoring with Lorient? It’s mostly if not all down to their pitiful conversion rate. Lorient rank second last in conversion rate this season at just 22.2%, after ranking fifth last season and eleventh in 2012-13.

Over the last three seasons, Lorient’s conversion rate this year ranks as the third worst behind this season’s Metz and Nancy of 2012-13.

When one even looks at the Expected goals created versus their scoring (conversion) rate, Lorient stick out like a sore thumb. 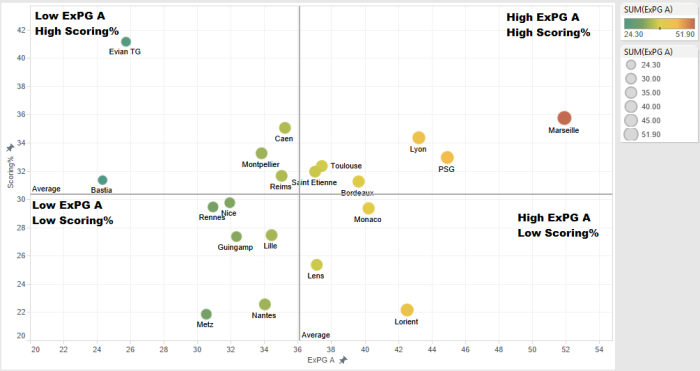 The thing with conversion rates that one has to take into account is the amount of randomness that comes with it from one year to the next. Here’s the relationship between the 17 promoted sides in both 2012-13 and 2013-14 in Ligue 1: 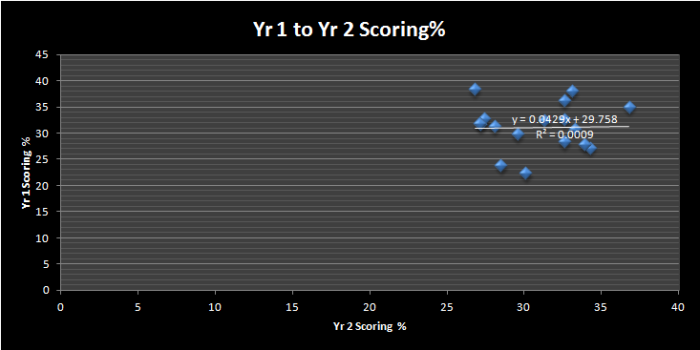 James Grayson did tremendous work on the repeatability of numerous metrics in the EPL and his findings on conversion rates also has it as a primarily luck based thing.

So Lorient are just very unlucky attacking wise? For the most part yes. We have ample evidence to prove that Lorient are creating a lot and the chances are of good quality.

The epitome of this would be their 3-0 loss to Rennes three weeks ago when they created 24 shots to ten for Rennes, eight of them on target versus six for Rennes, yet had nothing to show for it.

Yet there’s this nagging part of me that also thinks there’s something skill related that’s hindering them, especially when it comes to Jordan Ayew.

Jordan Ayew is talented. He broke into Marseille’s first team at the age of 19, scoring on his debut versus Lorient. He’s played regular minutes since the age of 20 whether with Marseille or Sochaux or now with Lorient.

Yet everywhere he goes, he seems to drag down his teams’ conversion rate due in part because of his own inefficiencies as a striker.

Of course there’s a fair bit of luck that goes into this but perhaps Ayew will never be more than this, a striker who takes a lot of shots but never converts them at a decent rate.

Regardless, Lorient are a flawed squad but a team that with more luck would probably be around mid table, where Nantes and Nice are hovering right now.

It’d be a shame if Lorient were relegated in part because they were horribly unlucky while a team like Evian survive because they have the highest conversion rate in the past three years but play dismal football.

The journey to survival for Lorient starts with a road fixture against floundering Marseille on Friday then a home date with Bordeaux.

Perhaps they finally can catch some good breaks and live to tell another tale next season in Ligue 1, but it’s dangerously nearing the point of no return.