As pages are torn from calendars around the world, the start of the British summer may just bring the end of a season of a  completely different type, but whether or not it will be Manchester United’s is the question on everyone’s lips. The second last round of games in an enthralling Barclay’s Premier League season looks set to be the most important of all. On a weekend where Manchester City, a club whose 12 month spending spree ended last August with a bill of £216m, enter into their biggest game of the season with Sunderland’s reserve keeper minding the nets for them, in the increasingly erratic world of football there are even stranger occurrences to report.

As football rivalries come, few clubs the world over are more loathe of each other as Manchester United and Liverpool are. Years of sniping, gloating, fighting and mocking have done little to build bridges between these footballing powerhouses yet this Sunday will see fans of one club wishing the other to victory as if they had supported them all their lives.

Not since 1995 have Manchester United fans wanted Liverpool to win a game as much as this one. Back then, league leaders Blackburn Rovers travelled to Anfield and second place Manchester United were in desperate need of a favour from their Northwest neighbours. A 2-1 victory for Liverpool meant they got it but unfortunately for Alex Ferguson’s side, they failed to carry out their own duties and could not overcome a West Ham side who gave their all to spoil their opponent’s dreams.

Fifteen years (and nine League titles on), the Red Devils find themselves in a very similar position. Trailing Chelsea by a single point, a result for Liverpool against the Blues matched with a victory of their own against Sunderland would see United once more regain top spot in the league and with only a home game against Stoke remaining, surely a nineteenth title.

With Alex Ferguson speaking of Liverpool’s inherent pride and rich history, debate all week has seen fans ponder as to whether a defeat this weekend for Liverpool, an eleventh in the league this season, may just be one of their sweetest results in what has been a dismal nine months. Is an opportunity to at least delay Manchester United knocking them further from this infamous perch too hard to resist?

Still smarting from an away goals defeat to Atletico Madrid on Thursday night, it is surely questionable as to whether any of Liverpool’s players could care less about the impact their performance against Chelsea could have in terms of deciding the destination of this years title, a prize which they themselves set out last August with realistic hopes of gaining.

The high hopes of last summer have been slowly and tortuously replaced by a feeling of emptiness and abject disappointment within the Liverpool FC community. Having not won a top division title in 20 years, the club have had to sit idly by and watch their once seemingly unsurmountable league title record be slowly eroded and then matched. Could they allow their last meaningful act of an already dire season be to give Manchester United a helping hand in taking one of the last proud records their club has from them?

TV and radio shows all week have wheeled out the ex-pros for their opinions and each has vehemently claimed that Liverpool will do their utmost for victory, speaking of the pride each player has in their shirt and their desire to win every game every game they play. Far from me to question any footballing luminaries but I wonder if this view is a little naive. As message boards throughout the world feature tales of how Pool fans will don the Chelsea blue before setting off to Anfield on Sunday, is it remiss of people to assume that somehow the players are able to remove themselves from such feelings? 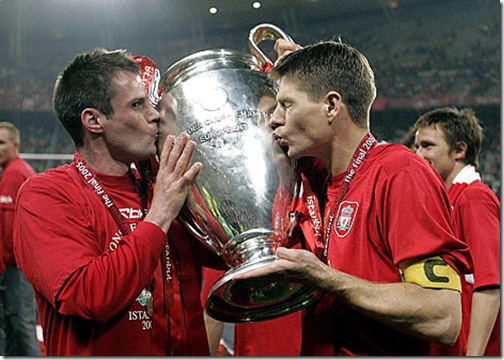 New recruits like Maxi Rodriguez may not feel the same attachment to the club as others and will surely run out onto the pitch wondering what all the fuss is about should they be given the chance to do so, but what about the likes of Jamie Carragher, a player who has long said that if he were not in the squad himself, he’d be standing on the Kop supporting whoever was? He’ll never claim to be so, at least while he’s playing, but somewhere in his subconscious he must surely be sickened by the thought of United gaining yet more glory. Even worse, that he somehow aided them in doing so.

While United fans will turn Liverpool fans this weekend, they will be as unrelenting as ever in letting Liverpool know who the top dogs are in a fortnights time should their dreams come true. Could pouud Liverpool men like Carragher or Steven Gerrard allow this to happen?

Whether Carragher or Gerrard will feature at all is another hot topic of conversation. Rafael Benitez is never shy to rest players and it would be no surprise if fatigue was to be declared as an excuse should Liverpool’s starting eleven be almost unrecognisable come kick-off. It could be the perfect foil.

The one thing Manchester United may have in their locker is the still existent chance of Liverpool somehow claiming fourth spot. Just two points off the pace and with sides above them facing each other, a late season charge toward the only saving grace for an awful season is not unthinkable should results go their way. If, and I’ll admit it is still a massive “if”, Liverpool players (and coaches) are thinking of playing at anything but full pace, they are also foregoing the only chance they have of saving some face as a club this season.

A popular football site ran a poll this week asking whether Liverpool fans would prefer to get fourth place or otherwise stop United from winning the title. Latest results have it a hair’s breadth in favour of the former, hardly a ringing endorsement for sportsmanship. Many people have been pointing out that last time round, Liverpool pulled no punches against Blackburn but a lot of water has passed under the bridge since then, and floating in that water was nine more titles for United.

Aside from all this debate, there is of course the matter of the game itself. Given the gulf in quality between the sides and the circumstances in which Liverpool enter into the match (including the absence of one of their few truly world class players) it must also be mentioned that it is quite  likely that even if Liverpool do give it their all, a victory for Chelsea would still represent anything but a shock.

But why talk about that when conspiracy theories are far more fascinating?

One thought on “Sleeping with the Enemy”