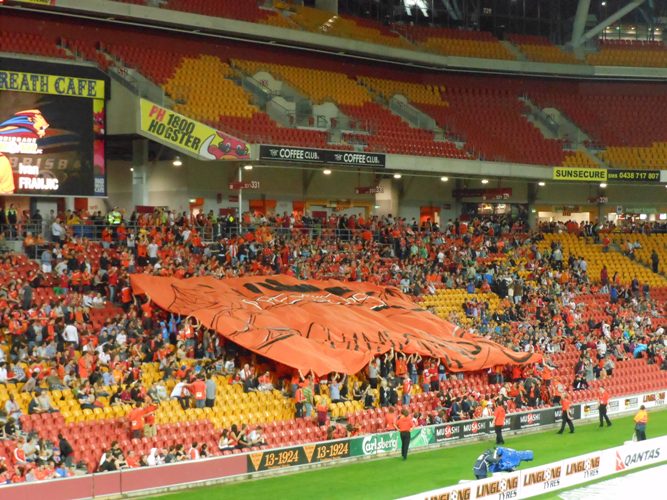 After all the anticipation and hype, the A-League finally kicked off after a seven month off -season.  What did we learn in the first week?

Here’s six of the best:

The goalkeepers are awesome!!  Week 1 was all about the goalkeepers.  In previous years the standard of keeping was just not up to scratch.  Too many goals were conceded as a result of goalkeeper error or ineptness. Week 1 teaches us that the standard has improved. Five goals in one game and four in the other four. No clangers. A saved penalty. Great technique and brilliant saves were THE highlight of the weekend.

And probably the best performance was from a keeper on a losing team. Matt Ryan for the Central Coast Mariners put in a ten out of ten display. He’s only 19 years old.  He throws himself about with youthful enthusiasm but commands his box like a seasoned veteran. Write down the name, memorise it.  Actually, scratch that.  You’ll be seeing plenty of him in the future when he plays for a major European club. The kid is good.

This effort was almost equalled by Ante Covic (this guy looks like a goalkeeper should look) for the Melbourne Victory and Liam Reddy for Sydney FC. Clean sheets for those lads. Eugene Galekovic kept Adelaide United in the game when they should have been taken to the cleaners.

Newcastle need a new coach –  really really quickly. Yes they may have won the game but some flashes of brilliance masked a poor display from the Jets.   The defence was caught out time and time again. Good keeping and good fortune prevented Melbourne Heart from scoring a hatful. Oh, and don’t think the Heart are spared, their defence was poor too. However, the goals they conceded were more about individual brilliance rather than poor defending. It could be a long season for the Heart. It could be for Newcastle too. However, the right appointment could make all the difference….

Brisbane will be up there yet again, and the Central Coast won’t be far behind.  Brisbane Roar. Wow. Just wow. Lose the captain, lose key midfielders, lose key defenders, lose an average striker. No bother. The new players just slotted in and picked up where their predecessors left off.  The Brisbane system reigns supreme and the new players look right up for the task.  Brisbane again is the team to beat. When they come to your town go and watch them. You won’t regret it. The Mariners were also impressive. The sense of team, of unity and purpose is evident. The stable squad worked really hard and broke on the counter with exciting pace and speed. If every game every week was Brisbane – Central Coast you’d never tire of watching.

Sydney won’t be as bad as last year, but they won’t be that much better. Yes, they gave Melbourne one hell of a game. Yes they could have won if Brett Emerton wasn’t such a choker on the penalty spot. However, this was week 1 against Melbourne in front of 40,000.  Will they put in the same level of performance in front of 10,000 supporters in Sydney? Week after week? The blues have put their faith in Emerton being the Sydney saviour.  It’s a whole heap of weight on one man’s shoulders. Can he carry the burden of expectation on his shoulders?  He’s good but not that good.  Still, to be fair there is improvement in them. Time for some squad players to step up.

Gold Coast United have doubled their crowd!!  Yes ladies and gentleman.  This time last season the beach bums were pulling crowds of around 2000. For this game it was 4116. That’s a 100% increase.  Someone somewhere has done something right. Both Wellington and the Coasters looked a few weeks off their best.  Gold Coast has some new players to bed in and Wellington need to stabilise the club ownership. The game didn’t reach the heights but we’ll be patient with them.  The jury is out -for now.

Adelaide United is still in hibernation. Wakey wakey Adelaide! The season has started, time to play kickball.  It took the Adelaide midfield 45 minutes to realise this and even then they only put in a shift for 30, before hitting the snooze button. Maybe they’ll wake up next week. We’ll throw them in the same box as Wellington and the Gold Coast.  Wait and see.

There is one more thing learnt from Week 1. But that’s for the next article. Be sure to check in on backpage football over the next couple of days. The best spray is still to come.