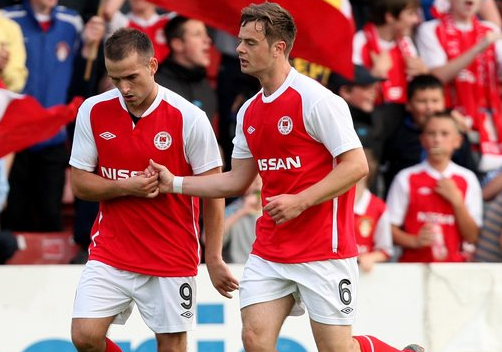 Every time a sports team of any form makes a major breakthrough after a considerable amount of time without success, the media spin it’s as the end of x amount years of hurt. They talk about the joy of the modern day fan, the tears and the jeers. They analyse the road to this year’s final and where the trophy was won and lost. They cover the heroes and the goal scorers, the manager and the captain but they really look at the reason why ending fifty one years of hurt actually means so much – the time and the failures since the last success.

The 1961 cup final was a strange affair between St Patrick’s Athletic and Drumcondra United. While Drums today do not exist in their current form back in the 1960’s they were one of the powerhouses of Irish football. The northside club won the League Championship four times by 1961 and had already won five FAI Cups prior to the 1961 final. The press in the build-up to the final gave St Patrick’s little or no chance. Drumcondra took the lead through Dan McCaffrey early on in the game and it looked like the press predictions of an easy win for the northsiders would come true but Pats rallied and John White drew Pat’s level from inside his own half. Then midway through the second half Pascal Curtin drove in a corner. The ball evaded everyone.  Everyone except Willie Peyton. It was Peyton’s second Cup final winner in three years and the cup was returning to Inchicore.

It is hard to believe that a club that had such a good cup record in the late 1950s and early 60s would be still waiting 51 years to win the cup once again but then again, nobody does glorious failure in the cup quite like St Patrick’s Athletic. The Inchicore outfit have not won the FAI Cup since 1961. This is not because of a lack of opportunity, no; Pats have contested six finals since they last won the trophy.

It was Paddy O’Rourke’s generation that last brought the famous trophy back to rest on the bar of McDowell’s pub on Emmet Road in Inchicore.  They must have been on the roof of the Inchicore pub given all those who have stories and tales about the subsequent night in the pub overlooking Richmond Park. Little did they know that it would be another six years before they would be back in the FAI Cup Final.

The hype and build up to the 1967 Cup Final centred on St Pat’s and their attempts to end a 6 year spell without the FAI Cup. The 1967 was one of the most memorable cup finals, an end to end affair that the hoops won narrowly.  It would be another seven years before Pats reached the final of the cup. This time the pressure on the Saints to end a thirteen year wait was immense and seemed to affect the players, losing 3-1 to a Charlie Ferry inspired Finn Harps in the 1974 cup final. The sense of disappointment was even greater than in 1967 because of the poor nature of the performance against the Donegal side.

The 1980 cup final against Waterford would break more heartache for the Inchicore side when Brian Gardiner broke saints hearts to bring the cup back South across the Suir. Once again Pat’s had failed to not only win but even perform to a level that would have given them a chance to impose themselves on the games.

The Inchicore side’s woes in the cup continued throughout the 1980’s and early 90’s and it would be 1996 before they found themselves back in the final. The 1996 final was an all Dublin affair between Shelbourne and St Patricks. Pat’s took the lead and looked in control of the game until Tony Sheridan stepped up to score a sumptuous lobbed effort to bring Shels level and take the game to a replay. At the final whistle it was as if Pats had lost, perhaps knowing they had blown their best chance to end the long wait for the FAI Cup. It was nearly inevitable given how deflated Brian Kerr’s troops were that they would lose the replay and lost it they did 1-0.

The weight and pressure of waiting such a long time was particularly evident in St Patrick’s performances in the 2000’s. The 2003 cup final against Longford was one the saints were heavy favourites for. Whether it was the pressure of the favourite’s tag but the saints started the game poorly and were soon behind to the midland side. St Pats grew into the game too late and Longford had upset the odds and denied Pat’s the opportunity to end their FAI Cup final hoodoo.

There most recent final appearance final was in 2006 against Derry City. The final was played on a miserable day with rain bucketing down and a cutting wind whirling around Lansdowne Road. Despite the inclement weather conditions the final was one of the best of modern times, with Pats going ahead three times only to be pegged back each time by the Candystripes.  The match was tied at 3-3 all in extra time before a Brennan own goal won the FAI Cup for Derry in the last ever final held at the old Lansdowne Road. The reaction of the St Patricks players and supporters at the end showed how much ending the hoodoo meant to everyone connected with the club.The cup drought has continued up to the present day.

This weight of expectation and pressure now falls upon Liam Buckley and his players. Fittingly it is their tormentors from 2006, Derry City, who they face in the final on Sunday November 4th. Already both the media and the bookies have made the Inchicore outfit heavy favourites to win the trophy. Judging from St Pats’ history in this competition, it is unlikely to be a straightforward occasion. One thing is certain however, should this generation of Pat’s players bring the trophy back to Inchicore, then the saints fans will be on the roof the of McDowell’s .