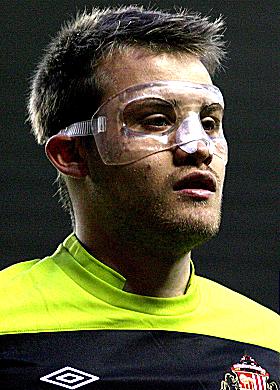 This summer, while his team-mates head off to either the Euros or to the beach, Simon Mignolet will be behind a desk at the University of Leuven.

The Sunderland goalkeeper has become an expert on the inner-workings of Belgium’s bicameral system of governance, after two years of “spare time” study, and is currently preparing to sit his Political Science finals. A 23-year-old mature student, he has been educating himself remotely since moving to Wearside from his boyhood club Sint-Truidense, in June 2010.

In a recent conversation with The Guardian’s Louise Taylor, Mignolet said:

These are my last three courses so, hopefully, I’ll graduate this summer.

It’s not always easy to finish training and then start working, when everyone else is off enjoying themselves, but now I have to keep going.

I’ve got two exams and one paper left to complete.

On arriving in the North East, the 6’4” natural athlete faced stiff competition, from Craig Gordon and Kieran Westwood, for a place in the Sunderland goal. He modestly describes his former self as a “kid” who was simply looking to learn from the more senior ‘keepers.

This understated “kid” quickly found himself being thrown in at the proverbial deep end, with his rivals falling foul of injury and illness. A couple of eye-catching performances later and, former Black Cats manager, Steve Bruce had rewarded him with a permanent first team role.

Mignolet made his way to the club at a time when Gordon’s now-chronic knee injuries had first began to surface. Originally, former Birmingham manager, Bruce had wanted to bring in veteran David James as a replacement. When this trail ran cold, he turned to, his former Brum ‘keeper, Nico Vaesen for advice. Vaesen alerted him to the talent of his young compatriot.

Mignolet, himself, has not been immune to injury concerns. Back in October, he suffering a broken nose and eye socket at the hands of a lumbering Emile Heskey. After being sidelined until the New Year, he was called into action early, due to a wider goalkeeping crisis. This led the Belgian number one to, famously, don a protective mask during games.

Whilst Mignolet was out nursing his injuries, gaffer Bruce was dismissed and replaced by man manager par excellence Martin O’Neill. The ‘keeper attests to O’Neill’s confidence-building talents, citing the effectiveness of private conversations between the Northern Irishman and his plays.

He’s got the players’ heads right.

Sometimes changing little things can make a huge difference and the gaffer talking personally to people has been a big part of our improvement.

His understanding of the mental side of things has been very important. We find it a lot easier to play football now.

“The mental side of things” is an area in which Mignolet is truly excelling. The model professional has, largely, resisted the temptations that come with the Premier League territory. He has shunned the cars, girls and pseudo-rapper lifestyles that many superstar players favour and has focused on his family life and personal improvement.

O’Neill aside, the quadrilingual Mignolet credits his parents (in particular his former Goalkeeper father) as well as his law graduate partner Jasmine, for their positive influence on his mental approach to life.

The Flemish Brabant native; who was once released by Sint-Truidense as a 14-year-old outfield player, before his father’s guidance helped in to break back in as a custodian; is now settled in the England and his future looks incredibly promising, both on and off the field.

One thought on “Simon Mignolet: A gentleman and a scholar”