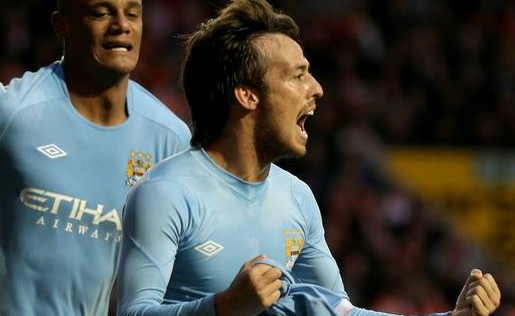 Not since the days of Georgi Kinkladze have Manchester City fans been mesmerised game after game by one player, but in David Silva they now have a new pint sized hero to worship.

The old “cold night in Stoke” mantra trotted out by football sceptics grows ever tiresome, and 12 months ago the slight of build Silva was subject to such ribbing, despite having just been part of the Spain’s all conquering World Cup winning side.

Indeed, it has become a lazy adage to aim at those pesky foreigners who have only come to England for the money and will most likely feck off when they can’t cut the physical nature of the league.

However, a whirlwind first season and an FA Cup Winners’ medal later, Silva is lighting up grounds up and down the country. While Sergio Aguero grabbed all the headlines at Eastlands last night, it was the craft and guile of Silva that provided the catalyst for another City win. His poise and strength to wriggle out of a challenge in the build up to Aguero’s first goal typified a player who has comfortably adapted to the English game.

According to the EPL Index, Silva completed 45 out of 49 passes (91.8%) against Swansea and created four scoring opportunities while helping himself to a goal of his own. The prospect of his intricate play linking up with Aguero on a regular basis is quite simply frightening.

I was fortunate enough to see Silva in the flesh at Eastlands back in December when he orchestrated the 4-0 demolition of Aston Villa. What struck me most was his ability off the ball; the stuff you don’t see on television. He constantly dropped short to pick the ball up off his centre halves as well as Nigel De Jong, and must have covered every blade of grass on the pitch.

Given City’s tendency to deploy two holding midfielders, there is even more pressure on Silva to create in his role as the team’s trequartista but 13 assists in all competitions last season gives an indication of his capabilities. Manager Roberto Mancini is well aware of just how important Silva is to the side.

“Trequartista is an important position in the team,” he says.

“For me David Silva is a fantastic player because his technique is incredible and he understands when the right time to pass the ball is.”

Still only 25, Silva is still a few years from his peak so no doubt we can look forward to many more exhilarating performances from the man who has been nicknamed ‘Merlin’ by his teammates.

One thought on “Silva is Gold”