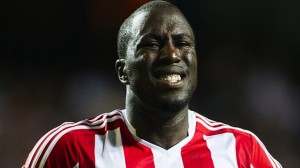 It is a very peculiar situation to find the leading striker of a country ranked in the top 15 in the world to be heading into the world’s most prestigious tournament, in a matter of months, with only 2 goals to their name. This is the exact situation Jozy Altidore finds himself in at Sunderland.

The physically dominating  and notably powerful target striker has only been able to better his goal tally by one during his second stint in the Premier League – after a turbulent 09/10 season at  Hull City where he only scored a solo goal against Manchester City in 28 league appearances for the side who went on to get relegated. Now, aged 24, Altidore will by no means want to see a repeat Wearside, yet so far there are few signs of much improvement.

Altidore, in 13 starts and seven substitute league appearances at Sunderland, has not only struggled for goals but also assists. He is constantly in and out of the starting XI due to a lack of productivity. There is little movement off-the-ball which arguably – in the Premier League – is a critical attribute to possess whereby space and time is so limited. Altidore has looked relatively static in moments and consequently makes him more predictable for central defenders to play the game of containment. Performing for a team sitting 19th in the league who has had numerous backroom changes during his time alongside a managerial sacking/replacement, continual line-up alterations, heavy defeats and a sheer lack of high quality service have also contributed to the predicament the young American is in.

Contrast this to last season when Altidore netted 23 times in the league and 15 the year before whilst playing in the Eredivisie at AZ Alkmaar.  There is no doubt that the US International has an affection for the Dutch league, after stressing to fellow compatriot Juan Agudelo just how great the league is in recent weeks. What was so impressive during Altidore’s time in Holland was his ability to be able to utilize his physical attributes in a league which places heavier emphasis on technical ability. The Eredivisie has always been known for facilitating the production of young, technically-gifted talent. This has seen Altidore’s own technical qualities vastly improve also as shown explicitly by his goal count. This made Altidore’s return to the Premier League seem perfectly understandable. He had proved that he was capable of making the step up, but this time as a more mature, well-rounded target-man.

For USA, Altidore’s record is hard to question after such a successful 2013 – capped off being named the 2013 US Soccer Male Athlete of the Year. Altidore achieved eight goals last year including three game winners in World Cup qualifying matches and a record five-game-scoring streak. A stunning hattrick away to fellow qualifiers Bosnia-Herzegovina, which resulted in a 4-3 win, was a feat which Altidore noted on his ESPNFC column as ‘a night I would never forget’. USMNT head coach Jurgen Klinsmann in November last year gave his public support for Altidore, calling for ‘patience’. Altidore’s position in the USMNT is hard to question considering his form on an International level, but he needs to hit form domestically if he is to guarantee starting in what is undeniably a group of death – Germany, Portugal and Ghana. With another USMNT striker by the name of Aron Johansson being in red hot form at Altidore’s former club (AZ Alkmaar), the pressure is on for Altidore to deliver. Otherwise he may only not play in partnership with the Icelandic-American, but not be in the starting XI at all.

Fans and bloggers are beginning to turn on Altidore also. Some giving him the unfortunate epithet of ‘the new Heskey’ which is a label no player would want. Others have him on their list of worst Premier League signings of the summer 2013 and, most recently, the chant ‘if Jozy scores, we’re on the pitch’ was heard echoing around Old Trafford in Sunderland’s League Cup semi-final second leg tie to Manchester United. Of course this was used in a humorous manner, but does Altidore really want to become the brunt of all jokes so early on in his Sunderland career? Probably not. 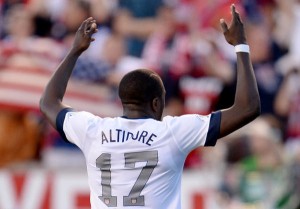 Altidore looks to have three options in what is one of the most important times of his career. First of all the obvious is to persevere at Sunderland and look to assert himself as a first team player. This would involve showing a more proactive approach that has not been seen from him before, meaning far more movement and more of a willingness to create his own chances. The service for Altidore has been far from excellent; meaning the only man he can fully rely on right now is himself to grab goals.

The second option is to go on loan to either a European club, perhaps back to the Eredivisie or somewhere else in Europe like Germany, otherwise he could follow the path of Brek Shea and have a short loan at a championship club. Due to Altidore’s calibre it is unlikely this would happen, but in terms of building confidence perhaps the move may be logical to him. A permanent move away seems untenable due to how recently the American joined the Black Cats.

The third could perhaps be a short-term return to Major League Soccer, where Altidore in his early years proved to be one of the best strikers USA has produced and acted as a launchpad for his move across the Atlantic. The likes of other USMNT players, Michael Bradley, Clint Dempsey and Clarence Goodson have all made recent comebacks so why does Altidore not follow them? It would be surprising if Altidore would not be one of the best strikers in the league if he decided to make such a move.

Whatever decision Altidore decides to take it is clear that time is running out. With just under 5 months to go until USA kick their first ball in Natal against Ghana, Altidore will not only want to start but also enter with supreme confidence, the kind that will be asked of him when playing in group so brutal and contending with a travel schedule so demanding. The US International has the track record and the credentials to suggest he can still show his full potential, but all depends on how well Altidore uses the little time he has to be considered a genuine threat to opposition teams at the World Cup, where the pressure just could not be any more immense.

4 thoughts on “Should Jozy Altidore be considering his options?”