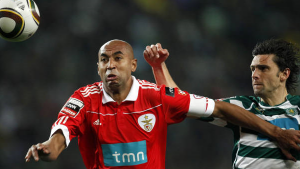 Few would argue that Sporting’s timid collapse at home to eternal rivals Benfica in the Lisbon derby is probably not currently their biggest problem. This in itself tends to illuminate the demise of the green and whites, relegated to an unseemly scuffle for 3rd place with the likes of Braga, Guimaraes, Uniao de Lieria and Paços Ferreira, as their dramatic season lurches from one self-inflicted catastrophe to another.

With the president abandoning ship midway through the season and the Sporting Director committing media suicide live on a t.v. debate show, a playing staff thin on experience and low on morale, a bank balance creaking audibly under the pressure of football’s continued attempts to pretend there’s no economic downturn and support staying away in its droves, it is fair to say that the sun has shone more radiantly around the Estadio de Alvalade.

With so many off field disturbances making the headlines, the performances on-field often take a dive below the acceptable and that has been the case at Sporting. Languishing far behind the front two of Benfica and Porto, it has long dawned on Sportingistas that they are in a race for the also-ran slots with the willing but limited talents of furniture kings Paços de Ferreira and Dom Afonso Henrique’s lads up in the northern stronghold of Guimaraes. Left battered and scarred by too many off days, Sporting’s meagre squad has had to put up with being shorn of its one true bit of star quality, the stick-like Liedson carting his talented boots and shiny Mohican back off to Brazil to play out in the twilight zone at Corinthians. How the tears flowed as he bade farewell a month ago, tugging at his shirt and patting his heart. The supporters in the bancadas were right to look doleful and crestfallen, for this was the frail back of their last hope disappearing down the soggy Alvalade tunnel.

Which leaves us with what exactly? Star signings like Maniche, plodding and overweight, hunkering about under the load of a serious attitude problem, is hardly the figure to pull the club into the limelight again. His mis-kicks and failed runs are becoming an embarrassment, his fouls a mixture of frustration and lost pace. The squad is a hotch potch of young starlets that may one day take proper flight (Diogo Salomao, Cristiano), old stagers who need to take a look at themselves as they pop in for their pay packets (Polga, Maniche), lightweights who will never hit the heights (Grimi, Postiga) and others who might flourish in a good side but look lost in a bad one (Matias Fernandes, Daniel Carriço).

It says much that the goalscoring hopes of the green and white nation now rest on the triangular-haired Yannick Djalo, a Tony Daley look-and play-alike, with one appreciative eye on the mirror and the other on the features pages in the so-called pink press, Portugal’s plethora of cheap gossip magazines that follow the semi-stars of pop and reality tv and plaster their faces onto glossy stories of weight gain, plastic surgery and lovers’ betrayal. That Yannick’s main claim to fame this season is the minor kerfuffle caused by the oddball naming of his daughter with small time soap actress-cum-singer-cum-what-does-she-do-again Luciana Abreu speaks volumes for his input on the green baize itself. (Lyonce Viiktórya is the misspelled aberration that the poor little mite will have to carry with her into adulthood. She may one day have reason to be thankful for deed polls). Sporting’s followers have no such luck. They are stuck with their team and its failed management set-up and cannot call for a quick fix.

Outgoing president Bettencourt, a man of quiet habits and whispered words, will leave as his legacy a club wavering between bankruptcy in its original meaning and bankruptcy in sporting terms. He has built an off-field pyramid of management structures so delicately layered that lines of communication are blurred, levels of responsibility unclear and the popular sport of buck passing is rife. This was adequately highlighted by the recent television appearance by Costinha, Sporting’s over-dressed Sporting Director, who committed hari kiri in front of the live cameras, denigrating the club’s backroom set-up and admitting, as one of those supposedly responsible for the running of team affairs, that he didn’t know why Liedson was leaving. Within days the axe had fallen and his suave three piece suits were gone from the Alvalade corridors of power. His enormous shades and contraflow check three piece will be sadly missed in the directors’ box.

That leaves the club with a low-key manager in Paulo Sergio, a man who looks good in a rally jacket, backed by the only manager in recent history to go to Estonia and fail to win the league title with Vladimir Romanov’s perennial champions KB Kaunus, José Couceiro, a nephew of old Sporting legend and member of The Five Violins Fernando Peyroteo. Good green and white stock, therefore, but many question his ability to pull this squad around and create the momentum that the club so badly craves.

In Portugal’s hair trigger world of hire ‘em and fire ‘em, it would be a brave man who bets on all of these characters being around come May.