As first a player, and then as player-manager from November 2007, he has been a major part in the finest sustained spell of success in the club’s 111-year history. 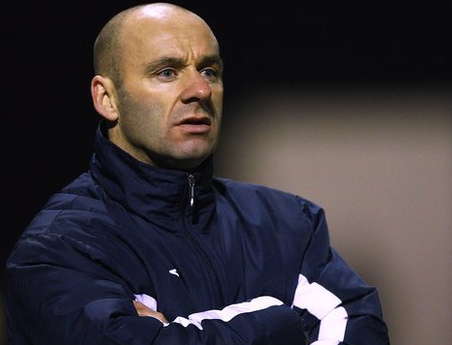 On Saturday, following a series of meetings at Barrow AFC’s Holker Street home, co-manager Darren Sheridan left his position. The much-loved character’s four-year-plus run, at the jointly-held helm of the club, had come to an end via mutual consent.

Previously, on Friday February 3rd, it had been announced that Sheridan was to be placed on gardening leave, by the Blue Square Premier outfit’s Board of Directors. At the time of Sheridan’s suspension, the Board stated that an undisclosed allegation had been made against the co-manager and that a thorough internal investigation would, as such, be conducted.

This clandestine inquisition culminated in Sheridan leaving Barrow “on good terms”, in the words of Chairman Brian Keen. Sheridan’s former managerial partner, Dave Bayliss, would now be taking sole responsibility for team affairs. The club subsequently expressed it’s intention to make no further public comment, as to the nature of the complaint that had triggered this strange sequence of events.

Over the course of his time at Barrow, the man affectionately known as “Shezza” had become one of the most recogniseable faces of non-league football.

During his five years with the Bluebirds, the 5’6” midfield terrier-cum-maestro gradually morphed into a contradictorily banterful Drill Sergeant of a manager.

At 44-years-old and still a part-time player, making 24 appearances last season, Sheridan hadn’t lost any of his culture. Even as his pace (and hair) began to elude him, he continued to be one of the most accurate passers in the Barrow ranks. His evergreen wand of a left foot would consistently betray his experience of playing at the highest level of English football.

Indeed, Shezza’s greatest fame was achieved during the most successful spell in the history of Barnsley FC. He made 149 appearances for the Yorkshire side, helping them to achieve a first ever promotion into the country’s top flight.

In the subsequent 1997-98 Premiership season, Sheridan would go on to feature in a 1-0 Anfield upset of Liverpool. That same year, he would also star in an unforgettable FA Cup 5th Round knockout of Manchester United.

Leaving the Tykes in 1999, the Stretford native went on to play for Greater Manchester namesakes Oldham Athletic – linking up with his Republic of Ireland international brother, John – and Wigan Athletic – at the time, Division Two playoff contenders.

After then embarking on a three-year stint in Scotland, Sheridan joined the Barrow playing staff in January of 2007. He found himself at a club in the doldrums of the Conference North, flanked by bankrupt Scarborough and Lancaster sides, relegation probables, staring into the footballing abyss.

In a dramatic turn-around, a matter of months after his debut, the inspirational Sheridan would secure Barrow’s divisional status for the 2007-08 campaign, with a Goal of the Season-winning free-kick.

In the opening months of the new campaign, Barrow reverted to type, finding themselves once again rooted in the division’s relegation zone. Mercifully, in the run-in to Christmas 2007, the Board of Directors took action. The disastrous tenure of, then boss, Phil Wilson came to a close.

With a busy festive season looming, AFC would need an effective temporary fix to guide them through the the upcoming blizzard of proverbial six-pointers. Calling on the most senior players at the club, the Board appointed a group that would, ultimately, go down in Bluebirds folklore as the “Three Wise Men”. Sheridan would make up 1/3 of this trinity, alongside Skipper Paul Jones and, their fellow former pro, Dave Bayliss.

The experienced trio brought immediate results and a surprising run of success ensued. So successful was the Christmas period that Bayliss and Sheridan were handed the reigns on a permanent basis. With Barrow great Jones now refocusing on his playing duties, a unique two-man managerial era had begun.

Any questions over the playing status of Messrs. Bayliss and Sheridan were quickly resolved. An arrangement was agreed upon whereby both men would never be selected in the same matchday squad, leaving at least one free to patrol the touchline, at all times.

The unorthodox and untested Daz & Dave management combination continued to deliver the goods, exceeding the expectations of even the most hardcore Barrovian supporters. The pair not only hauled the cash-strapped club out of the Blue Square North relegation places but, audaciously, proceeded to take them on a whirlwind 20-match unbeaten run. Miraculously, the more-than-unfancied side finished the season in the playoff positions, with a tidal wave of momentum behind them.

The transformation train rolled on to Burton’s Pirelli Stadium, the neutral venue for the 2007-08 Playoff Final. The co-managers led the team to a 1-0 win over Stalybridge Celtic, taking the club back into non-league’s top division, for the first time in almost a decade.

The following season, once again defying the bookmakers’ predictions, Barrow would finish 20th in the Blue Square Premier, only one place but a solid seven-point cushion away from relegation. Crucially, not only did Bayliss and Sheridan secure AFC’s Conference status, they also set about establishing the club as a force to be reckoned with in cup football.

AFC’s glorious 2008-09 FA Cup odyssey began with a plum 2nd Round home tie against Brentford. On a special night, in front of a bumper crowd, Barrow defeated a Football League side for the first time in their 36 years as a non-league team. This 2-1 giant-killing act was enough to earn the Ziggers an historic trip to Middlesbrough’s Riverside stadium, in the 3rd Round.

In one of the high-points of the club’s existance, Barrow took a convoy of over 100 supporters’ coaches to the North East, smashing the Premier League club’s away attendance record in the process. The Barrovian party of 7,000 travelling fans numbered around five times the typical home attendance figure at Holker Street!

On the day, there was no shame in Barrow falling to a narrow 2-1 defeat. Gifted young goalkeeper Alan Martin drew glowing praise from all quarters, for his Man of the Match display. Indeed, the Leeds loanee was, seemingly, unbeatable throughout club’s first Conference season. The Scotland U-21 stopper must go down in the books as one of the most inspired acquisitions of the co-managership era.

Even with Martin returning to his parent club, Barrow’s cup reputation continued to grow, in the following season. As luck would have it, after reaching the promised land of the 3rd Round once again, Barrow drew another North East giant. This time around 7,500 fans made the long New Year trek, to see the Bluebirds leave Sunderland’s Stadium of Light with their heads held high, after a competitive showing in a 3-0 defeat.

The FA Cup wasn’t the only competition in which Barrow would make a name for themselves, this season. An epic run in non-league’s premiere knockout competition, the FA Trophy, culminated in a dramatic Wembley final. Watched, this time, by 8,000 travelling fans, Barrow upset Graham Westley’s big spending Stevenage Borough (now a League One promotion chasing outfit!).

After falling to an early goal, in the national stadium, Barrow scrapped incessantly for the next 70 minutes. Finally their reward came, as substitute Lee McEvilly rose to head the vital equaliser, forcing the game into Extra Time. 17 minutes into the overtime period, the comeback was made complete. With a UK-wide TV audience looking on, up stepped local boy Jason Walker to fire in a fairytale 30-yard wonder-goal. Enraptured, creating an image that will, eternally, be burned onto the retinas of Barrow fans, Sheridan lept into the arms of the taller Bayliss, passionately punching the air. 13 minutes of graft later and the unthinkable had been done. Barrow were now not only an established Conference side, they were also FA Trophy winners. Bayliss and Sheridan were rewarded with contract extensions. The partnership had reached it’s zenith. 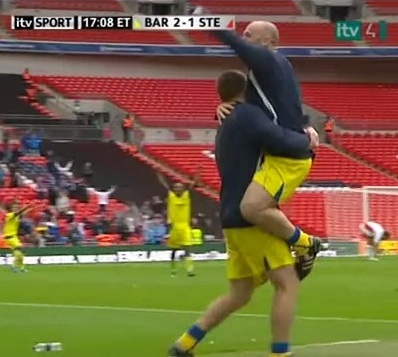 Partnership’s Peak: Barrow come from behind, to win at Wembley.

At the time of writing we are, roughly, half-way through the 2011-12 Conference season. After weathering a stormy start to last season’s campaign, Barrow are now stabilised as a mid-table club. The Cumbrian outfit boast an exciting young side full of dynamic attacking talent, the likes of which is not often seen at semi-pro level. Rough diamonds Adam Boyes, James Owen and Jack Mackreth continue to increase in value. Post-Sheridan, such players will be significant part the legacy of the co-managerial era. Their on-the-field performances, as well as the future transfer fees that they are likely to command, could be instrumental in the club’s quest to break through the glass ceiling that stands between themselves and the non-league elite.

Exit Shezza, his side standing within eight points of the Conference National play-off places, with Chairman Brian Keen having recently described the under-funded team as ‘pound-for-pound the best in the division’.

The reason, for the Bayliss-Sheridan era’s abrupt ending, remains shrouded in mystery.

One thought on “Shezza: End of an Era”