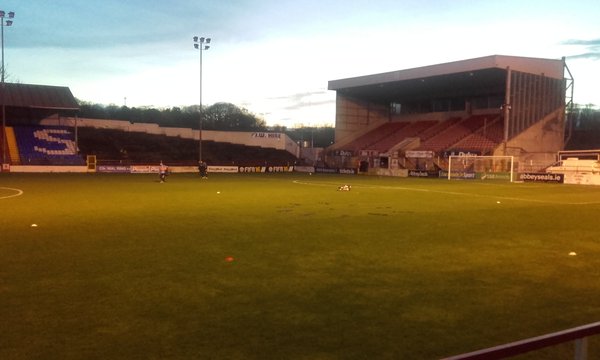 Shelbourne FC officials would have been peeking nervously through their curtains on Friday morning as Dublin became covered in an unseasonable blanket of snow. They need not have feared however as, in true Irish fashion, the sun came out in the afternoon and and saw to it that the 2016 SSE Airtricity League Division 1 campaign could kick off without too much disruption.

Cobh Ramblers were the visitors as Tolka Park opened its gates for the first time in 2016. Despite the snow clearing up, the temperature remained bitterly cold as the seats began to fill up. Shelbourne unveiled their new family section as a face-painter kept the children entertained while adults discussed the forthcoming match and caught up on news they may have missed out on during the close season.

Shels’ fanatic ultras fanbase, the Briogáid Dearg, were in full voice as the teams came onto the pitch. Tolka Park was rocking as kick-off approached. The fans started the season as they mean to go on by getting behind their team in a bid to get back to the top flight for the first time since relegation in 2013.

Kick-off arrived and a tension fell over the crowd as they realised that there was still a big match to be played and three crucial points to be won. The thud of every ball being kicked could be heard as the two sides exchanged early chances. Cobh in particular forced Shelbourne goalkeeper Greg Murray into some impressive early saves.

Cian Kavanagh, on loan to Shelbourne from Shamrock Rovers, looked strong in the centre of midfield while gangly striker Jamie Doyle caused problems for the visitors’ defence.

The diminutive Evan Galvin, signed on loan along with his twin brother Cory from Waterford United, showed flashes of brilliance for Cobh.

After those early exchanges,the first half whimpered to an uneventful end as the chants of ‘Shels’ and ‘Red Army’ were replaced with a gentle murmur of the crowd filling the North Dublin air. The half-time whistle was met with a mass exodus of people towards the bar area for much-needed hot drinks.

After being serenaded by the sounds of David Bowie’s ‘Let’s Dance’ during the break, the fans took their seats once more as the second half began a lot livelier than the first. A couple of crunching tackles from either side set the tone as it appeared that neither manager pulled any punches during their half-time team talk.

Then finally, in the 53rd minute, a breakthrough. A Cobh attack down the right resulted in a scramble in the Shelbourne area and Galvin was on hand to hit home from close range. The Cork men ran towards the bench to celebrate with the coaching staff and the ground was hushed. Clearly not a Cobh fan in sight. 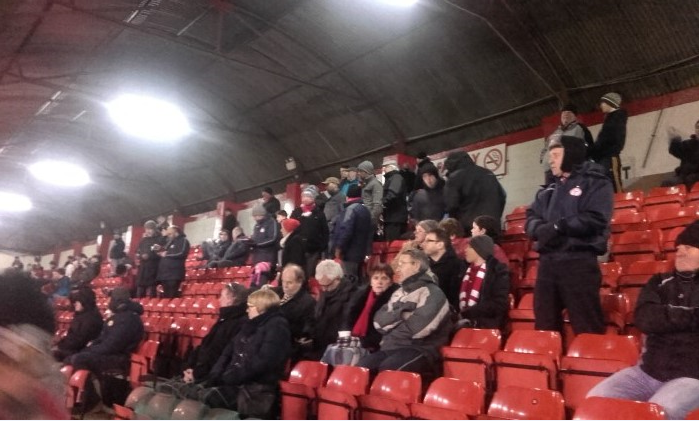 After the goal, the crowd got behind the home team while the language became a bit more colourful than those occupying the family section would have hoped.

As the hour passed Shels were rallying as the Briogáid Dearg found their voice once more. James English’s header went agonisingly wide as one voice in the crowd remarked “you can see this is going to be a long season”.

Cobh’s goalscorer Galvin was soon joined on the pitch by his twin Cory who replaced Anthony O’Donnell as manager Stephen Henderson looked to retain the lead.

Shels manager Kevin Doherty spent most of the second half on his feet and could be heard rallying the troops. It seemed to be working as his side looked more impressive than they did before conceding.

63 minutes had gone when the home side went close with another header, this time from Jamie Doyle. His namesake, captain Daire, tried to stamp his authority in the centre of the park as Tolka Park came alive. A much improved second half had got the crowd going as the rain began to pour down on the pitch.

Referee Robert Hennessey awarded the away side a contentious penalty but Galvin’s attempt to double his account was duly saved by ‘keeper Murray. This rallied the crowd even more as well but Doherty was now the loudest man in the stadium, barking out instructions at his players.

With 78 minutes gone he was even louder as the referee turned down a penalty appeal for handball in the box. Cobh were now very much on the backfoot as Shels pressed hard in search of an equaliser.

This was almost their undoing as Cobh launched a counter attack led by Evan Galvin who exchanged passes with full-back Shane O’Connor before shooting against the bottom of the post. A mass sigh of relief was breathed around Tolka Park.

Tensions almost spilled over when Shels’ Adam O’Connor was booked for a foul on O’Connor, who spent a few seconds lying on the turf. “Get up or get off” was the cry from one member of the crowd as sympathy was in short supply.

There was one last throw of the dice from Doherty as he introduced new signing from Cabinteely Sodiq Uguntola on 87 minutes. It didn’t take him long to get booked for a foul before telling the referee exactly how he felt. Desperate times.

The goalscorer Galvin went off to a hostile reception as five minutes of added time was indicated by the fourth official.

The crowd could now see the significance of defeat in the opening game of the season and began to raise the roof some more to encourage their side. A corner saw goalkeeper Murray come forward to no avail.

One last chance from a free kick went begging before the final whistle. A disappointing opening game for Shelbourne while Cobh Ramblers took a well-earned three points back down to Cork. However, it’s clear that Doherty has built a decent squad. If Shelbourne show the same spirit away to Athlone Town next week as they did in the second half against Ramblers they should have enough to kick-start their season.

On the other hand, Cobh manager Henderson could barely contain his joy as he told Back Page Football: “It’s always really important to get your first points in this league to get you off the mark but we came to Shels and deservedly got the three points if you don’t mind me saying so. We caught them on the break six or seven times and their goalkeeper made some great saves. We kept our shape really well.”

They’re a very good Shels side and Kev has them drilled really well. Basically that’s a long-winded way of saying we’re over the moon.”

Over the moon he certainly was and the long journey home will no doubt have been a lot more pleasant with three points in the bag after a first win for Cobh over Shelbourne in four attempts.

READ: All systems go as Shelbourne aim to get back to the big time >>