Shamrock Rovers striker Mikey Drennan has revealed he will be taking a break from football in order to fight depression.

The club have released a statement explaining:

Shamrock Rovers can confirm that striker Mikey Drennan has been given time off by the club as a result of a personal matter. Mikey has the full support of all his colleagues and friends at the club; we wish him the very best and hope to see him back soon. 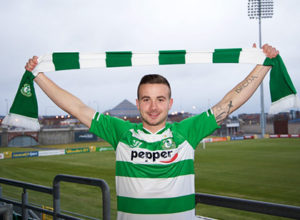 Drennan himself went public with his decision on his Facebook page by posting:

I want to put this on Facebook to let people know what’s going on and will be in the papers soon. I’m taking time out of football because I’m not happy and I’ve been suffering with depression for the last 3 years and I thought I would have dealt with it better then but it’s come to a point now where I need to leave and take a break. I just want to be happy because life is way too short, I need to be around people I love and get a job.

I needed something to change and this is a very tough decision and one that I’ve put my whole life into and hoped to be successful in but it’s not one I’ve made over 2 weeks. This has been on my mind a lot over the past few years but I said I would stick it out. It can’t get any worse but it did and I haven’t spoke to people about it as much as I should and I wanted to deal with it myself but it was the wrong decision. People will always look at me different saying, “I’m a failure” and all that crap but it’s the reason why I came home in the first place to play soccer here to see would it make me better which obviously it didn’t. I just wanna come back and get the help I need to get back on track and would like to go back playing in League of Ireland at some stage if the chance came up. I want to thank everyone who has given their best to support me and make this difficult decision.

Kilkenny-born Drennan spent four years in England with Aston Villa and and made appearances on loan at both Carlisle United and Portsmouth before returning home to play for Rovers January 2015.

He has played eight times in the Premier Division for Rovers this season.

The issue of mental health is something that is increasingly becoming more talked about in this country and the way in which Drennan has so eloquently highlighted his battle in such a public domain can only be admired.

The more people talk about their problems, particularly those in the public eye, the easier it will become for others to follow suit.

Aware is one of a number of organisations in this country that offer support to people suffering from similar issues to that of Mikey Drennan.

We at Back Page Football can only wish him well and hope that he comes out of this ordeal stronger than ever.