Fantasisti – This weekend’s Serie A action was dominated, for varying reasons, by the fortunes of three of Italy’s most gifted players for generations – Alessandro Del Piero, Antonio Cassano and Francesco Totti.

We turn first to Signor Del Piero and Juventus. Two weeks ago, Alessandro drew level with Giampiero Boniperti’s tally of 178 Serie A goals for La Vecchia Signora. A showdown with AC Milan at the San Siro was the ideal setting for Del Piero to overhaul Boniperti’s record.

Milan were the favourites for Saturday night’s game and started strongly. Zlatan Ibrahimovic rattled the crossbar in the opening minutes after some tidy footwork from Pato.

It was Juventus who would take the lead, however. A deep cross from Paolo De Ceglie was met by the head of Fabio Quagliarella. The former Napoli star’s header beat Christian Abbiati to give the visitors a first half lead.

Milan had several opportunities to equalise before Del Piero’s moment came. Mohammed Sissokho found himself through on goal but slipped at the crucial moment. He regained his balance to roll the ball to Del Piero, who slammed it into the bottom corner. It was a landmark moment in a glorious career and the manner of Juventus’ win might prove to be the catalyst for a long overdue title challenge.

Juventus overcame a strong Milan side despite their injury problems. Buffon, Chiellini, Amauri and Iaquinta were all unavailable for Saturday’s match. The mire was deepened at the San Siro when De Ceglie and Martínez were both injured during the game. Luigi Del Neri will be thankful to have the experience of Del Piero to carry Juventus through their injury crisis. 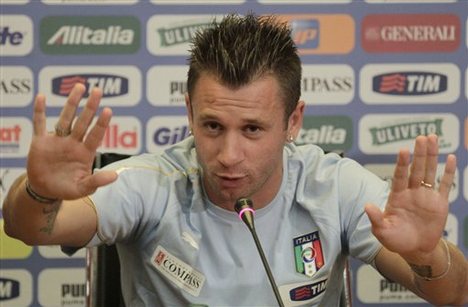 Crisis is a word that could equally describe the situation which Antonio Cassano found himself in this weekend. We were told that Cassano had matured since his marriage this summer. The 28 year-old had ended his international exile and was led Sampdoria to the Champions League last season. This much vaunted coming-of-age has been short lived.

Cassano was on the brink of being dismissed by Sampdoria this weekend after a heated row with the club’s president, Riccardo Garrone. The club initiated proceedings to have Fantantonio‘s contract terminated when the forward swore at Garrone and refused to attend an awards ceremony.

The falling-out prompted speculation about where Cassano might move. Juventus, Napoli and Manchester City emerged as front-runners before Cassano apologised to Garrone in front of Sampdoria’s players and staff. Cassano has stated his intention to stay at Sampdoria if at all possible.

It remains to be seen if Cassano will stay in Genoa, but a future without the former Real Madrid striker may not be all that grim for Samp. An stoppage-time goal from Giampaolo Pazzini, his first of the season, handed Sampdoria a 1-0 win over Cesena.

Cassano’s old team mate and mentor, Francesco Totti, was sent off as Roma hosted Lecce at the Stadio Olimpico. Totti has endured a poor start to the season and he will now suffer the misery of missing the Rome derby. Roma were comfortable winners over Lecce, the 2-0 scoreline perhaps flattering the visitors. Nicolás Burdisso put the Giallorossi into the lead with a fine header, before Mirko Vucinic doubled Roma’s advantage.

During the build-up to Vucinici’s goal, Rubén Olivera tripped Totti off the ball. Olivera was promptly sent off by the referee, but surprisingly a red also followed for Totti. The referee apparently dismissed the 2006 World Cup winner for retaliating against the Uruguayan.

Roma might have succeeded in having Totti’s red card rescinded but for his furious reaction to the dismissal. While trudging towards the tunnel, Totti suddenly picked up pace in a bid to catch up with his assailant. He was restrained by five officials.

Having watched Roma climb into the top six for the first time this season, Lazio looked to strengthen their position at the top of the Serie A table against Palermo on Sunday. André Dias put Edy Reja’s side into the lead with a spectacular volley from Christian Ledesma’s inswinging free kick. Lazio retained the lead despite Giuseppe Biava’s sending off on his return to Palermo.

Uruguayan international goalkeeper, Fernando Muslera, was the hero for Lazio. He produced save after save against a relentless Palermo effort spearheaded by Mauricio Pinilla.

The win moved the Aguile four points clear of Inter, who were fortunate to beat a spirited Genoa side at the Stadio Luigi Ferraris. Ghanaian international, Sulley Muntari, provided the goal for Internazionale. Muntari replaced the injured Esteban Cambiasso and powered a low effort straight at Eduardo. The Portuguese goalkeeper suffered a rare lapse of concentration and allowed Muntari’s drive to slip through for the game’s only goal.

Elsewhere, Ezequiel Lavezzi was on the scoreline once again as Napoli celebrated Diego Maradona’s 50th birthday with a win over Brescia.

Udinese‘s rise up the table continued against Bari thanks to the talents of Alexis Sánchez. The Chilean scored the Zebrette‘s opener and provided an assist for Mauricio Isla.

The result leaves Bari at the bottom of the Serie A table alongside Parma. Parma were ineffectual in front of goal again as they played out a goalless draw with Chievo.

Next week brings with it the prospect of the Rome derby. It bears mentioning that the last time Lazio entered the derby at the top of the table, they went on to win the Scudetto.

For Roma, a win could mark the end of their recent woes. A win for Edy Reja’s men over their rivals might represent a shift in the balance of power in the Eternal City.