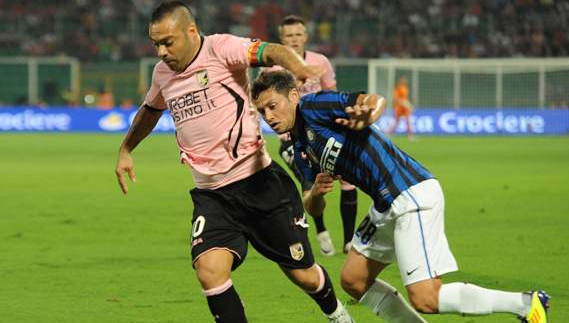 The first week of a new season of Serie A finally began, after weeks of doubts and worries due to the proposed player strike. Serie A has begun in thrilling and exciting fashion with 35 goals scored in 10 matches. The highlight was definitely the 4-3 thriller between Palermo and Inter, which ended in Palermo’s favor where Fabrizio Miccoli being the star, scoring a brace and putting in a top performance. Of course, there were other exciting matches including the highly anticipated match between top favorites Milan and Lazio, which ended in a 2-2 draw at the San Siro with new signings Miroslav Klose and Djibril Cisse making good impressions on their debuts.

Without further ado, here’s a brief roundup of the first week of Serie A action:

Inter started the season in shocking fashion as they lost to Palermo with Fabrizio Miccoli the star of the show, scoring a brace in an exciting 4-3 win. Inter were appalling in defence as they still haven’t settled to new coach, Gian Gasperini’s three man defence formation, which cost them the match. Inter took the lead through Diego Milito, who’s looking to overcome his poor performances last season and it ended 1-0 to Inter at halftime. But just minutes into the restart, Fabrizio Miccoli equalized for the home side after lofting the ball past Julio Cesar from a headed pass by Edgar Barreto. Despite the quick equalizer, Inter quickly got back in front again minutes later, when Diego Milito scored from the penalty spot following the aforementioned Barreto’s clumsy challenge on Walter Samuel. That setback didn’t affect Palermo and didn’t take them long to get things back to level terms, when Josip Ilicic and Fabrizio Miccoli combined to set up Abel Hernandez for the easy tap in to equalize at 2-2.

In the final minutes of the match, Fabrizio Miccoli scored a superb free kick from 25 yards out to make it 3-2 for the home side. Substitute Pinilla Ferrera sealed the win for Palermo when he shot a stunning strike which gave Julio Cesar no chance, and made it 4-2 for the home side. Debutant Diego Forlan grabbed a late third goal for Inter in injury, but it was too little, too late and Inter conceded their first loss of the season.

In the most anticipated match of the opening week of the Serie A, current holders and favorites AC Milan entertained one of the challengers for the title, Lazio at the San Siro in Milan. Lazio got off to a flyer when debutant Miroslav Klose, scored from a sublime finish after weaving his way past Alessandro Nesta from an excellent Stefano Mauri pass to make it 1-0 for the away side. Things didn’t get any better for the Rossoneri as Cisse made it 2-0, following a defensive mix up between Thiago Silva and Alessandro Nesta and headed home another superb cross from Stefano Mauri.

Zlatan Ibrahimovic got the home side back in the game after scoring from a simple tap in, following excellent build up play from new signing, Alberto Aquilani. Aquilani again produced some excellent play when he set up Antonio Cassano for the equalizer, as he whipped in a good cross from the corner which Cassano headed into the net.

The second half didn’t bring in any goals despite the numerous chances coming by, especially from AC Milan. It ended 2-2 at the San Siro.

Results of the rest of the fixtures: